A 3-D Model of a Human Heart Ventricle

A 3-D Model of a Human Heart Ventricle

Published: July 24, 2018
| Story sourced from the Harvard John A. Paulson School of Engineering and Applied Sciences
This three-dimensional model of a left heart ventricle was engineered with a nanofiber scaffold seeded with heart cells. It could be used to study diseases, test drugs and develop patient-specific treatments for heart conditions such as arrhythmia. Credit: Luke MacQueen and Michael Rosnach/Harvard University
Read time:

Harvard University researchers have bioengineered a three-dimensional model of a human left heart ventricle that could be used to study diseases, test drugs and develop patient-specific treatments for heart conditions such as arrhythmia.

The tissue is engineered with a nanofiber scaffold seeded with human heart cells.

The scaffold acts like a 3D template, guiding the cells and their assembly into ventricle chambers that beat in vitro. This allows researchers to study heart function using many of the same tools used in the clinic, including pressure-volume loops and ultrasound.

“Our group has spent a decade plus working up to the goal of building a whole heart and this is an important step towards that goal,” said Kit Parker, the Tarr Family Professor of Bioengineering and Applied Physics at the Harvard John A. Paulson School of Engineering and Applied Sciences and senior author of the study. “The applications, from regenerative cardiovascular medicine to its use as an in vitro model for drug discovery, are wide and varied.”

Pull-spinning a nanofibrous ventricle scaffold. A polymer solution fed through a needle is pulled into a fiber by a high-speed rotating bristle. Fiber formation results from jet elongation and solvent evaporation and fibers are collected on a rotating ellipsoidal ventricle scaffold collector. Credit: Disease Biophysics Group/Harvard SEAS.

The research was a collaboration between SEAS, Wyss, Boston Children’s Hospital and the Harvard Stem Cell Institute (HSCI), and is published in Nature Biomedical Engineering.

“The long-term objective of this project is to replace or supplement animal models with human models and especially patient-specific human models,” said Luke MacQueen, first author of the study and postdoctoral fellow at SEAS and Wyss. “In the future, patient stem cells could be collected and used to build tissue models that replicate some of the features of their whole organ.”

“An exciting door is opened to make more physiological models of actual patient diseases,” said William Pu, Professor of Pediatrics at Harvard Medical School and a Principal Faculty member of HSCI and co-author of the paper. “Those models share not only the patient mutations, but all of the genetic background of the patient.” 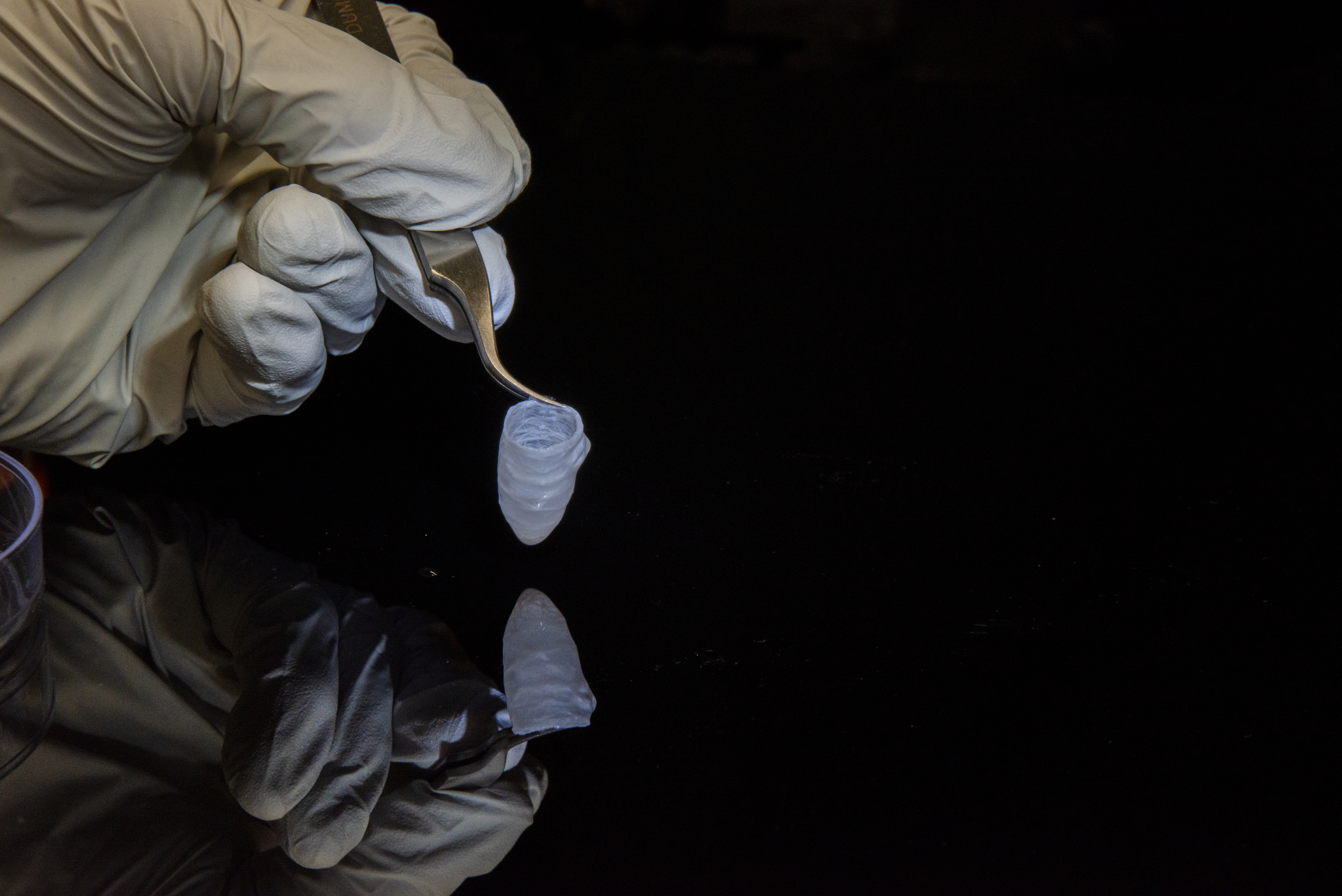 This three-dimensional model of a left heart ventricle was engineered with a nanofiber scaffold seeded with heart cells. It could be used to study diseases, test drugs and develop patient-specific treatments for heart conditions such as arrhythmia. Credit: Luke MacQueen and Michael Rosnach/Harvard University.

The key to building a functional ventricle is recreating the tissue’s unique structure. In native hearts, parallel myocardial fibers act as a scaffold, guiding brick-shaped heart cells to align and assemble end-to-end, forming a hollow, cone-shaped structure. When the heart beats, the cells expand and contract like an accordion.

To recreate that scaffold, the researchers used a nanofiber production platform known as pull spinning, developed in Parker’s Disease Biophysics Group. Pull spinning uses a high-speed rotating bristle that dips into a polymer reservoir and pulls a droplet from the solution into a jet. The fiber travels in a spiral trajectory and solidifies before detaching from the bristle and moving toward a collector.

To make the ventricle, the researchers used a combination of biodegradable polyester and gelatin fibers that were collected on a rotating collector shaped like a bullet. Because the collector is spinning, all of the fibers align in the same direction.

“It is important to recapitulate the structure of the natural muscle to obtain ventricles that function like their natural counterparts,” said MacQueen. “When the fibers are aligned, the cells will be aligned, which means they will conduct and contract the way that native cells do.”

After building the scaffold, the researchers cultured the ventricle with either rat myocytes or human cardiomyocytes from induced stem cells. Within three to five days, a thin wall of tissue covered the scaffold and cells were beating in synch. From there, researchers could control and monitor the calcium propagation and insert a catheter to study the pressure and volume of the beating ventricle.

The researchers exposed the tissue to isoproterenol, a drug similar to adrenaline, and measured as the beat-rate increased just as it would in human and rat hearts. The researchers also poked holes in the ventricle to mimic a myocardial infarction, and studied the effect of the heart attack in a petri dish that resulted.

To better study the ventricle over long periods of time, the researchers built a self-contained bioreactor with separate chambers for optional valve inserts, additional access ports for catheters and optional ventricular assist capabilities.

Using human cardiomyocytes from induced stem cells, the researchers were able to culture the ventricles for 6 months and measure stable pressure-volume loops. “The fact that we can study this ventricle over long periods of time is really good news for studying the progression of diseases in patients as well as drug therapies that take a while to act,” said MacQueen.

Next, the researchers aim to use patient-derived, pre-differentiated stem cells to seed the ventricles, which would allow for more high-throughput production of the tissue.

“We started by learning how to build cardiac myocytes, then cardiac tissues, then muscular pumps in the form of marine organism mimics, and now a ventricle,” said Parker. “Along the way we have elucidated some of the fundamental design laws of muscular pumps and developed ideas about how to fix the heart when these laws are broken by disease. We have a long way to go to build a four-chamber heart but our progress is accelerating.”

This article has been republished from materials provided by the Harvard School of Engineering and Applied Sciences. Note: material may have been edited for length and content. For further information, please contact the cited source.