Researchers at MIT unveil a series of sensors, memory switches, and circuits that can be encoded in the common human gut bacterium Bacteroides thetaiotaomicron.

These basic computing elements will allow the bacteria to sense, memorize, and respond to signals in the gut, with future applications that might include the early detection and treatment of inflammatory bowel disease or colon cancer.

“We wanted to work with strains like B. thetaiotaomicron that are present in many people in abundant levels, and can stably colonize the gut for long periods of time,” Lu said. 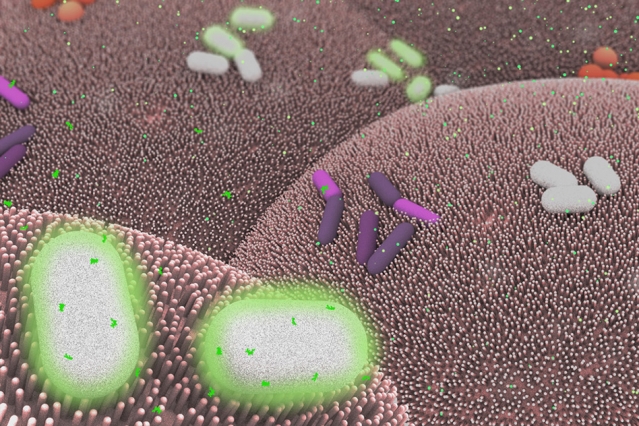 The team developed a series of genetic parts that can be used to precisely program gene expression within the bacteria. “Using these parts, we built four sensors that can be encoded in the bacterium’s DNA that respond to a signal to switch genes on and off inside B. thetaiotaomicron,” Voigt said.

These can be food additives, including sugars, which allow the bacteria to be controlled by the food that is eaten by the host, Voigt adds.

To sense and report on pathologies in the gut, including signs of bleeding or inflammation, the bacteria will need to remember this information and report it externally. To enable them to do this, the researchers equipped B. thetaiotaomicron with a form of genetic memory. They used a class of proteins known as recombinases, which can record information into bacterial DNA by recognizing specific DNA addresses and inverting their direction.

The researchers also implemented a technology known as CRISPR interference, which can be used to control which genes are turned on or off in the bacterium. The researchers used it to modulate the ability of B. thetaiotaomicron to consume a specific nutrient and to resist being killed by an antimicrobial molecule.

The researchers demonstrated that their set of genetic tools and switches functioned within B. thetaiotaomicron colonizing the gut of mice. When the mice were fed food containing the right ingredients, they showed that the bacteria could remember what the mice ate.

The researchers now plan to expand the application of their tools to different species of Bacteroides. That is because the microbial makeup of the gut varies from person to person, meaning that a particular species might be the dominant bacteria in one patient, but not in others.

“We aim to expand our genetic toolkit to a wide range of bacteria that are important commensal organisms in the human gut,” Lu said.

The concept of using microbes to sense and respond to signs of disease could also be used elsewhere in the body, he adds.

In addition, more advanced genetic computing circuits could be built upon this genetic toolkit in Bacteroides to enhance their performance as noninvasive diagnostics and therapeutics.

“For example, we want to have high sensitivity and specificity when diagnosing disease with engineered bacteria,” Lu said. “To achieve this, we could engineer bacteria to detect multiple biomarkers, and only trigger a response when they are all present.”

Tom Ellis, group leader of the Centre for Synthetic Biology at Imperial College London, who was not involved in the research, said the paper takes many of the best tools that have been developed for synthetic biology applications with E. coli and moves them over to use with a common class of gut bacteria.

“Whereas others have developed tools and applications for engineering genetic circuits, or biosensors, in bacteria that are then placed in the gut, this paper stands out from the crowd by first engineering a member of the Bacteroides genus, the most common type of bacteria found in our guts,” Ellis said.

The study has so far shown the efficacy of the approach in mice, and there will be a long road ahead before it can be approved for use in humans, Ellis said.

However, the paper really opens up the possibility of one day having engineered cells resident in our guts for long periods of time, he said. “These could do tasks like sensing and recording, or even in-situ synthesis of therapeutic molecules as and when they are needed.”