Collecting data on malaria exposure is vital in order to assess the effectiveness of interventions to combat the disease, and to help with long term disease surveillance. Traditionally these data have been difficult and expensive to collect, and the study authors believe their work could help make the process much easier and more accurate.

Researchers initially screened blood samples from 186 children in Uganda and looked at antibody responses to nearly 900 malaria parasite proteins. Using statistical analyses, they successfully identified combinations of antibody responses that could predict the date at which the children were last infected with the malaria parasite. Some of the proteins they identified were also able to predict the number of times the children had had malaria within the last year. 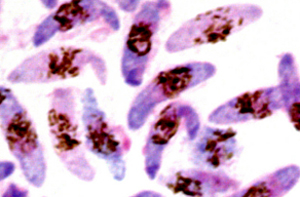 When they compared this with the children’s records, they found that the biomarker predictions accurately reflected the children’s actual exposure to malaria.

Professor Chris Drakeley, co-principal investigator from the London School of Hygiene & Tropical Medicine, said: “This is a great example of marrying technology and epidemiology to identify biomarkers relevant for malaria control. The challenge now is to validate these findings in different malaria endemic areas. We hope our work could help pave the way for more frequent and accurate estimates of malaria incidence.”

Further analysis in the study suggested that precise estimates of wider community exposure can be obtained from sampling a small subset of the community.

Dr Bryan Greenhouse, principal investigator of the project from University of California, San Francisco, said: “In many settings the current standard for malaria surveillance is the equivalent of intermittent, low resolution snapshots. What we are hoping to do with these new serologic assays would be the equivalent of getting high-resolution video footage for about the same cost.”