These nanoparticles have potential applications in medicine, biology, material science, and environmental protection, among many other uses. 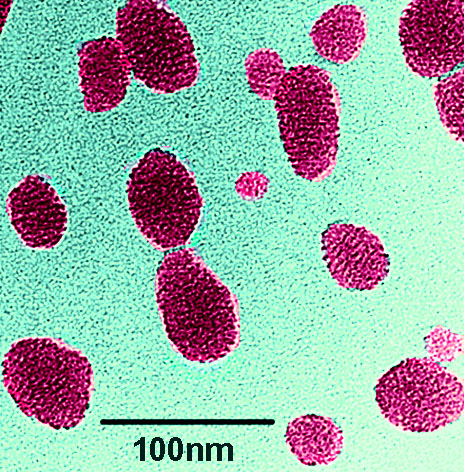 Fluorescent materials are already used in many of these applications. However, having much brighter labeling particles will allow much finer detection of environmental pollutants, signals in biosensors and even the detection of explosives.

In fluorescence, an initial ignition light energizes molecules, and then the molecules reemit the light with a different color. This phenomenon can be used in many different applications because it is easily detectable, using optical filters to remove the ignition light, leaving only the particles’ light visible.

"The particles should have a significant impact in the biomedical area," says Sokolov. "For example, you can create particles of different colors, which can be made to stick to particular biological molecules inside cells. Then you can see and trace those molecules easily with existing fluorescent microscopes. This fluorescent labeling helps to identify diseased cells and may show what is causing the disease. The particles are much more stable against photo-beaching than typical fluorescent dye. This means that one can trace the particles for a very long time."

Sokolov’s process physically entraps a large number of organic fluorescent molecules inside nanoporous silica particles, which can be 20 to 50 nanometers in diameter, while preventing the molecules from leaking.

As an example of their brightness, the fluorescence of 40-nanometer particles is 34 times brighter than the brightest water-dispersible (25-30 nanometer) quantum dots and seem to be the brightest nanoparticles created so far.

In 2007, Sokolov and his team discovered a method of making the brightest ever synthesized fluorescent silica micro (non-nano) particles. Various attempts to decrease the size of the particles down to the nanoscale led to the particles that were bright but not ultrabright. The problem was in the dye leakage. It took the group several years to finally synthesize the ultrabright nanoparticles.

Sokolov and postdoctoral fellow Eun-Bum Cho (now an assistant professor at Seoul National University of Science and Technology) and Ph.D. student Dmytro Volkov developed the process, which gives the desired nanoparticles. The group, which now includes postdoctoral fellow Shajesh Palantavida, is currently looking at the development of the particles suitable for biomedical labeling.

The research was partially supported by the National Science Foundation and the U.S. Army Research Laboratory’s Army Research Office. It was performed in Clarkson’s Nanoengineering and Biotechnology Laboratories Center (NABLAB), a unit led by Sokolov and established to promote cross-disciplinary collaborations within the University.

Clarkson University launches leaders into the global economy. One in six alumni already leads as a CEO, VP or equivalent senior executive of a company. Located just outside the Adirondack Park in Potsdam, N.Y., Clarkson is a nationally recognized research university for undergraduates with select graduate programs in signature areas of academic excellence directed toward the world’s pressing issues. Through 50 rigorous programs of study in engineering, business, arts, sciences and health sciences, the entire learning-living community spans boundaries across disciplines, nations and cultures to build powers of observation, challenge the status quo, and connect discovery and engineering innovation with enterprise.