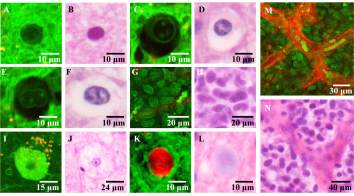 VU researchers from the Physics Department/LaserLab and VUmc have shown that a label-free optics technique can reveal exactly where brain tumors are, producing images in less than a second — unlike conventional methods that can take a whole day.

"The special thing about our images is that we showed they contain so much information", says Marloes Groot (Physics/LaserLab). "When I showed these images to the pathologists that we work with, they were amazed." Groot and her colleagues describe their work in Biomedical Optics Express.

When operating on cancer, surgeons want to remove tumours and not healthy tissue. This is especially important and challenging when dealing with brain tumours, which are often spread out and mixed in with the healthy tissue. Pathologists typically use staining methods, in which chemicals like hematoxylin and eosin turn different tissue components blue and red, revealing its structure and whether there are any tumour cells. But for a definitive diagnosis this process can take up to 24 hours, which means surgeons may not realise some cancerous tissue has escaped from their attention until after surgery — requiring a second operation and more risk.

With the new technique, the researchers do not use any labeling or staining at all. Instead, they fire short, 200-femtosecond-long laser pulses into the tissue, and when three photons converge at the same time and place, the photons interact with the nonlinear optical properties of the tissue. Through well-known phenomena in optics called second and third harmonic generation, these interactions produce a single photon.

The key is that the incoming and outgoing photons have different wavelengths. The incoming photons are at 1200 nanometers long enough to penetrate deep into the tissue. The single photon that is produced, however, is at 600 or 400 nanometers, depending on if it is second or third harmonic generation. The shorter wavelengths mean the photon can scatter in the tissue. The scattered photon thus contains information about the tissue, and when it reaches a detector, in this case a high-sensitivity GaAsP photomultiplier tube, it reveals what the tissue looks like inside.

While other researchers have exploited this technique for other applications — to make images of insects and fish embryos, for example — this is the first time anyone has used it to analyse glial brain tumours. These tumours are particularly deadly because it is hard to get rid of tumour cells by surgery, irradiation, and chemotherapy without substantial collateral damage to the surrounding brain tissue.

The researchers tested their method on samples of glial brain tumours from humans, finding that the histological detail in these images was as good — if not better — than those made with conventional staining techniques. They were able to make most images in under a minute. The smaller ones took less than a second, while larger images of a few square millimeters took five minutes. "This makes it possible to do it in real time in the operating room", Groot says.

Now that they have shown their approach works, the researchers are developing a hand-held device that a surgeon can use to identify a tumour's border during surgery. The incoming laser pulses can only reach a depth of about 100 micrometers into the tissue. To reach farther, Groot envisions attaching a needle that can pierce the tissue and deliver photons deeper.  "With our technique it is potentially possible to diagnose not only during an operation but possibly before surgery.”

Retinal Organoids as an Emerging Tool for Drug Discovery