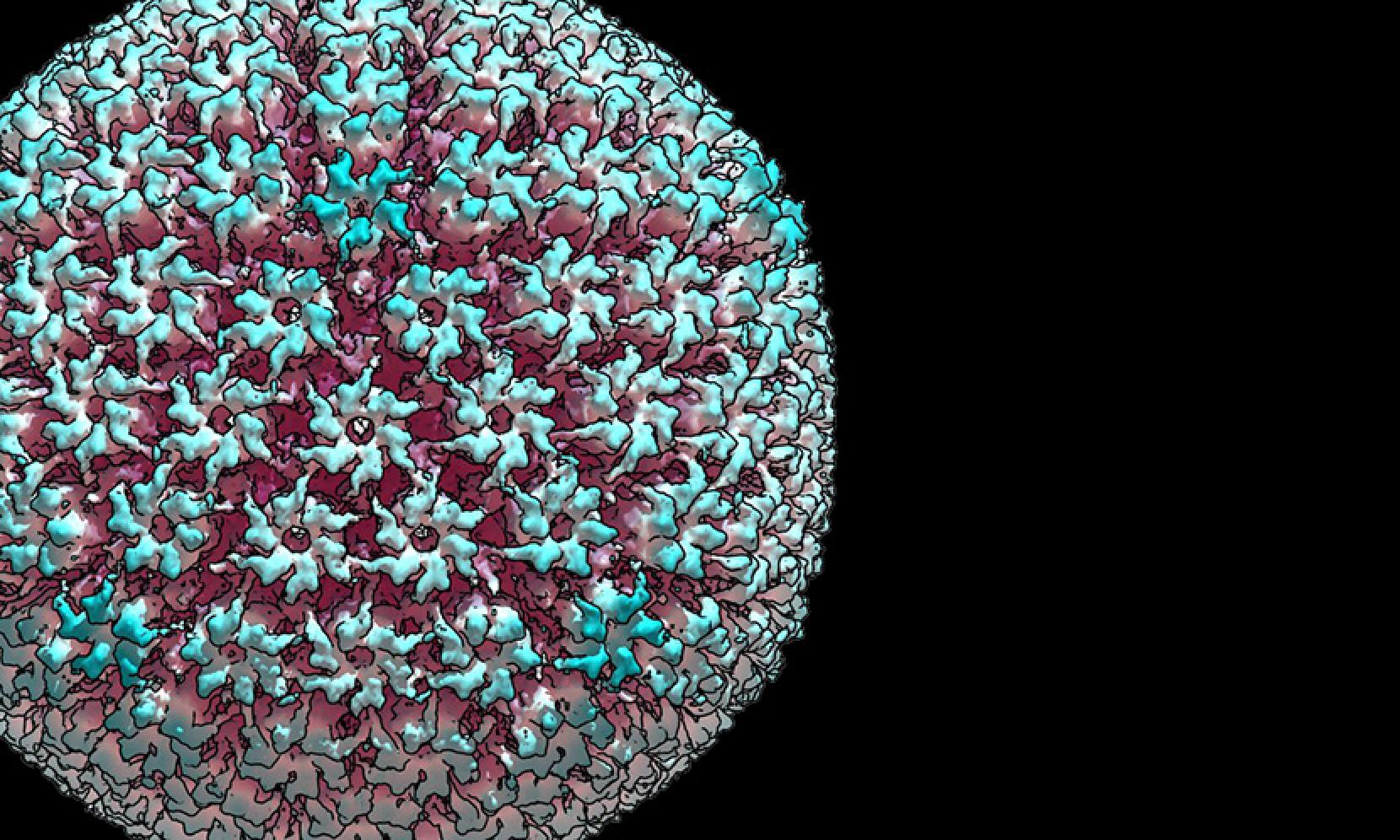 Researchers at The University of Texas at Austin demonstrated the ability to detect single viruses in a solution containing murine cytomegalovirus (MCMV). The single virus in this image is a human cytomegalovirus, a cousin of MCMV. It was obtained by chilling a sample down with liquid nitrogen and exposing it to high-energy electrons. Jean-Yves Sgro, U. of Wisconsin-Madison (EMD-5696 data Dai, XH et al., 2013)

Scientists at The University of Texas at Austin have developed a new method to rapidly detect a single virus in urine, as reported this week in the journal Proceedings of the National Academy of Sciences.

Although the technique presently works on just one virus, scientists say it could be adapted to detect a range of viruses that plague humans including Ebola, Zika and HIV.

"The ultimate goal is to build a cheap, easy-to-use device to take into the field and measure the presence of a virus like Ebola in people on the spot," says Jeffrey Dick, a chemistry graduate student and co-lead author of the study. "While we are still pretty far from this, this work is a leap in the right direction."

The other co-lead author is Adam Hilterbrand, a microbiology graduate student.

The new method is highly selective, meaning it is only sensitive to one type of virus, filtering out possible false negatives caused by other viruses or contaminants.

There are two other commonly used methods for detecting viruses in biological samples, but they have drawbacks. One requires a much higher concentration of viruses, and the other requires samples to be purified to remove contaminants. The new method, however, can be used with urine straight from a person or animal.

The other co-authors are Lauren Strawsine, a postdoctoral fellow in chemistry; Jason Upton, an assistant professor of molecular biosciences; and Allen Bard, professor of chemistry and director of the Center for Electrochemistry.

The researchers demonstrated their new technique on a virus that belongs to the same family as the herpes virus, called murine cytomegalovirus (MCMV). To detect individual viruses, the team places an electrode — a wire that conducts electricity, in this case, one that is thinner than a human cell — in a sample of mouse urine. They then add to the urine some special molecules made up of enzymes and antibodies that naturally stick to the virus of interest. When all three stick together and then bump into the electrode, there's a spike in electric current that can be easily detected.

The researchers say their new method still needs refinement. For example, the electrodes become less sensitive over time because a host of other naturally occurring compounds stick to them, leaving less surface area for viruses to interact with them. To be practical, the process will also need to be engineered into a compact and rugged device that can operate in a range of real-world environments.

Support for this research was provided by the National Science Foundation, the Welch Foundation and the Cancer Prevention & Research Institute of Texas.