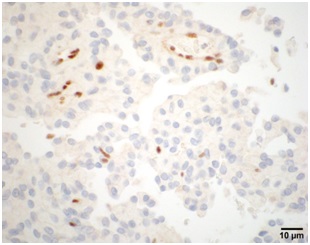 Meningiomas are the most common primary brain tumors, but the term encompasses over a dozen subtypes that range from benign to highly aggressive. Rhabdoid meningiomas are classified as highly aggressive due to their high rates of recurrence and mortality, but the experience and outcomes for patients with this rare form of brain tumor vary widely. Researchers from Brigham and Women’s Hospital, in collaboration with colleagues at Massachusetts General Hospital, have identified genetic mutations in this form of brain cancer that can distinguish aggressive rhabdoid meningiomas from more benign forms using routine laboratory tests. The new findings could have immediate implications for clinical decision-making. The work is published Nov. 10 in the journal Neuro-Oncology.

“Our work has practical implications for the care of patients with meningiomas,” said Sandro Santagata, MD, PhD, a pathologist in the Neuropathology Division at BWH. “We hope that this work will have an impact not only on clinical management, but also for the enrollment of patients in clinical trials. Novel treatments for meningiomas are urgently needed, and determining which patients have more aggressive forms of the disease based on the tumor’s genetics could help us design better trials and more precise treatment approaches.”

Ganesh Shankar, MD, PhD, a neurosurgeon at Massachusetts General Hospital, said, “Two meningiomas may appear similar under the microscope, but we know these two tumors may have very different clinical courses. The goal of this study was to identify an easy-to-measure feature that would help predict which tumors require closer surveillance and upfront therapies following surgical resection to delay progression. This is an effort that drew on the resources of multiple collaborating institutions working towards the same goal.”

Usually, rhabdoid meningiomas are classified based on physical appearance and characteristics, but these enigmatic tumors can be difficult for pathologists to accurately classify. To find a molecular fingerprint that could help identify rhabdoid meningioma, Santagata and his colleagues sequenced 560 cancer-related genes from 14 meningiomas. In one sample, the team detected a mutation in the BAP1 gene along with telltale physical features (such as the shape of the tumor cells) of rhabdoid meningioma. Previous studies had found that people with inherited mutations in the BAP1 gene that cause a loss of BAP1 protein are prone to a tumor predisposition syndrome – a condition that puts them at a very high risk of developing several kinds of tumors including tumors in the eye, lung, kidney and elsewhere. But primary brain tumors had not been associated with the syndrome before.

The presence or absence of BAP1 can be monitored with a simple and inexpensive test known as immunohistochemistry – in which a tissue sample is collected and stained for a particular protein. This approach is currently in routine use for characterizing samples of an eye cancer known as uveal melanoma and a tumor that arises from the linings of the chest and abdomen known as mesothelioma – forms of cancer tied to the tumor predisposition syndrome.

“Testing for BAP1 in rhabdoid meningiomas could be performed routinely and at a low cost, with the potential to change the course of clinical care and avoid overtreatment or to identify those who may need more aggressive therapy,” said Santagata. “We hope that this new work will offer insights for clinicians and patients alike as they seek more information on these tumors.”

Story from Brigham and Women’s Hospital. Please note: The content above may have been edited to ensure it is in keeping with Technology Networks’ style and length guidelines.

Top Considerations for Choosing the Best Components for Your Diagnostic Kit