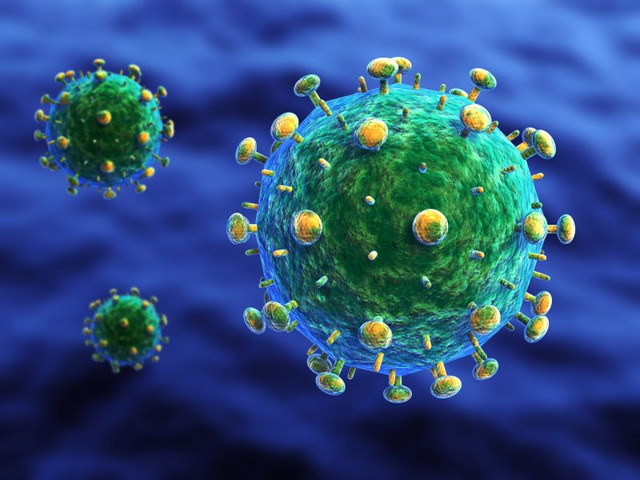 According to the WHO, around 36 million people are infected with HIV and a cure for the deadly virus infection has not yet been found. An international research team that includes scientists from the German Primate Center (DPZ), Leibniz Institute for Primate Research in Göttingen, has developed a new treatment strategy against the HIV-related Simian Immunodeficiency Virus (SIV). SI viruses infect different primate species and are regarded as the origin of the Human Immunodeficiency Virus. In the study, SIV-infected rhesus macaques were treated with an antiretroviral drug for 90 days and in addition they were treated with a specific antibody for 23 weeks. After finishing this therapy, all macaques showed sustained control of the infection as almost no SI viruses could be detected in the blood and gastro-intestinal tissues. The CD4+ T cells that are essential for the immune system were present in sufficient numbers in these tissues. Two years after finishing the treatment the viral load remained low, the immune system intact, and the rhesus macaques healthy. The treatment strategy thus offers a new and promising approach to the therapy of HIV infections in humans (Science).

Antiretroviral therapy is currently the most frequently used treatment of HIV infections. The drugs effectively block the proliferation of the HI viruses in the infected cells and thus delay the onset of the disease. However, these drugs have to be administered permanently since their discontinuation would immediately lead to virus rebound in the body. Their continuous administration is accompanied by adverse effects such as chronic inflammation, poisoning symptoms and accelerated aging. "The aim of the study was to find a new therapeutic approach for the treatment of infections with immunodeficiency viruses, which would permanently prevent the proliferation of the viruses even after only temporarily application," says Lutz Walter, head of the Primate Genetics Laboratory at the DPZ and co-author of the publication.

The study was conducted in the US under the leadership of scientists from the Emory University School of Medicine in Atlanta and the National Institutes of Health (NIH), Bethesda, USA. From the fifth to the 18th week after infection, the rhesus macaques received an antiretroviral drug identical to the ones given to humans. From the ninth week, this treatment was combined with a specific antibody therapy, which was repeated at regular intervals of three weeks. A control group received only antiretroviral therapy and an irrelevant control antibody. After the 18th week the antiretroviral therapy was terminated and only the antibody was administered until the 32nd week, whereupon the treatment of the monkeys was halted. "It is known that the SI and HI viruses tend to multiply especially in CD4+ T cells of the intestinal mucosa and thereby establish a chronic infection", explains Lutz Walter. “The specific antibody prevents the entry of these immune cells into the mucosa. A further spread of the viruses was thereby effectively stopped and the rhesus macaques have controlled the virus infection since almost two years without further medication.” After the treatment has ended, the viral load and the amount of CD4+ T cells in the animals were determined. In the blood and intestinal tissue, the virus load was below the detection threshold and the CD4+ T cells count were stable, indicating a functional immune system.

In addition to Lutz Walter, the other DPZ participants in the study were Christian Roos and Angela Noll. The three primate genetics experts investigated certain genetic markers of rhesus macaques. The focus was on the MHC class I genes as well as the genes of the killer cell immunoglobulin-like receptors (KIR). Both gene families are essential for a functional immune system as well as for the immunological identity of an organism. “Since certain variants of these genes are known to be beneficial or detrimental in the SIV infection, we have determined the alleles of these genes in all macaques of this study”, says Lutz Walter. “We wanted to make sure that the monkeys of the control and antibody-treated group just by chance do not have unfavorable and favorable alleles, respectively.” This partial result is important to secure the outcome of the study.

The antibody that was used to treat the macaques is a primatized variant of the therapeutic monoclonal antibody that is known as Vedolizumab and has been available since 2014 in the USA and in Europe. It is administered to patients to treat chronic inflammatory bowels diseases such as Crohn's disease and ulcerative colitis where the CD4+ T cells also play an important role. The scientists are seeking to test the new treatment strategy in clinical trials with HIV patients. A phase-I clinical trial is already underway in the United States. The aim is to find out whether a combination of antiretroviral therapy with Vedolizumab has the same effect in humans. “We have good reasons to believe that the therapy will work similarly in humans”, says Lutz Walter. “It would be a breakthrough for the future treatment of HIV patients.“