Reporting on their study with lab-grown human cells, researchers at The Johns Hopkins Univ. and the Univ. of Maryland say that blocking a second blood vessel growth protein, along with one that is already well-known, could offer a new way to treat and prevent a blinding eye disease caused by diabetes. 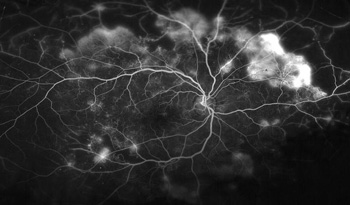 Blood vessels in the retina of a patient with proliferative diabetic retinopathy. Credit Wilmer Photography.

The disease, diabetic retinopathy, is the most common cause of vision loss in working-age adults in the U.S. Diabetic eye disease occurs when the normal blood vessels in the eye are replaced over time with abnormal, leaky, fragile blood vessels that leak fluid or bleed into the eye, damaging the light-sensitive retina and causing blindness. Forty to 45% of Americans with diabetes have diabetic retinopathy, according to the National Eye Institute.

Laser-sealing eye blood vessels can save central vision, but this often sacrifices peripheral and night vision, according to Akrit Sodhi, MD, PhD, an assistant professor of ophthalmology at the Johns Hopkins Univ. School of Medicine. Several recently developed drugs—bevacizumab, ranibizumab and aflibercept—can help treat these blood vessels by blocking the action of VEGF, a so-called growth factor released as part of a chain of signals in response to low oxygen levels, which stimulates the growth of new, often abnormal, blood vessels. But studies have shown that although these drugs slow progression to proliferative diabetic retinopathy, it does not reliably prevent it.

Looking for an explanation, postdoctoral fellow Savalan Babapoor-Farrokhran, MD, and Kathleen Jee, a student at the school of medicine who will begin her residency in ophthalmology at the Wilmer Eye Institute at Johns Hopkins next year, tested levels of VEGF in samples of fluid from the eye taken from healthy people, people with diabetes who did not have diabetic retinopathy and people with diabetic retinopathy of varying severity.

"The results suggested to us that although VEFG clearly plays an important role in blood vessel growth, it's not the only factor," Sodhi says.

If a drug can be found that safely blocks the second protein's action in patients' eyes, it might be combined with the anti-VEGF drugs to prevent many cases of proliferative diabetic retinopathy, Sodhi suggests.

The team is now investigating whether angiopoietin-like 4 might also play a role in other eye diseases, such as macular degeneration, which destroys the central portion of the retina.