Progress In Vaccination Against Vespid Venom

Progress In Vaccination Against Vespid Venom 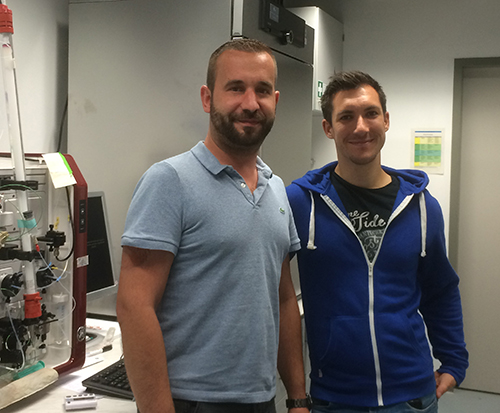 In late summer enjoying a piece of cake outdoors can soon become a risky venture – it only takes a few moments before the first wasps are buzzing around. These animals change their diet in late summer and are particularly attracted to sugary products. Those who are incautious or react inappropriately run the risk of wasp stings. This is sometimes a perilous situation for allergy sufferers.

Hyposensibilisation is a common therapy against allergies. Here, the patient receives an inoculation with the allergens at periodic intervals in an increasing concentration. In this way the body slowly becomes accustomed to the allergen, in this case the insect venom. The process can take up to five years. "For success it is important that the patients are treated with exactly the substance which induces the allergy," explains Dr. Simon Blank, leader of the working group at the Institute for Allergy Research (IAF) at the Helmholtz Zentrum München. However, there are numerous different variants of vespid venom. "Until now it was almost impossible to diagnostically differentiate the venoms of different wasp species," adds Blank. "Consequently, it is correspondingly difficult to offer patients the best treatment. This often leads to them being treated unnecessarily against many venoms, which is a burden for patients and the health insurers."

Blank and his colleagues led by the IAF Director Prof. Carsten Schmidt-Weber were able to overcome this problem with a new test. First, the scientists specifically produced the allergen components of the venoms from a total of seven different insect species in modified insect cells.* Then, they examined them on 63 patient blood samples for their interaction with the antibodies triggering the allergy. "A succession of several test methods enabled us to determine from the samples exactly the venom causing the allergic reaction in the patients," says lead author and doctoral student, Maximilian Schiener. “This could allow doctors to offer the most efficient vaccine.” However, according to the scientists, a hyposensibilisation therapy is not yet available against all venoms and further work is still to be done.

The results are coming just at the right time, because climate changes appear to be bringing new species of wasp to Germany which in turn produce their own venoms. "Recently our colleagues in Aachen reported that they had sighted a paper wasp which is well-known in the Mediterranean region," explains Blank. "If these neighbours propagate widely here, it would of course be an advantage if we were able to introduce the appropriate countermeasures directly – the vaccine is already available. A test such as ours could unambiguously identify the triggering venom in advance."