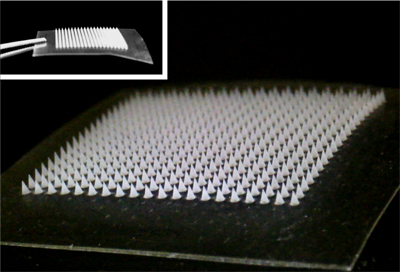 An interdisciplinary team of researchers has developed a smart patch designed to monitor a patient’s blood and release blood-thinning drugs as needed to prevent the occurrence of dangerous blood clots – a condition known as thrombosis. In an animal model, the patch was shown to be more effective at preventing thrombosis than traditional methods of drug delivery. The work was done by researchers at North Carolina State University and the University of North Carolina at Chapel Hill.

Thrombosis occurs when blood clots disrupt the normal flow of blood in the body, which can cause severe health problems such as pulmonary embolism, heart attack or stroke. Current treatments often rely on the use of blood thinners, such as Heparin, which require patients to test their blood on a regular basis in order to ensure proper dosages. Too large a dose can cause problems such as spontaneous hemorrhaging, while doses that are too small may not be able to prevent a relapse of thrombosis.

“Our goal was to generate a patch that can monitor a patient’s blood and release additional drugs when necessary; effectively, a self-regulating system,” says Zhen Gu, co-corresponding author on a paper describing the work. Gu is an associate professor in the joint biomedical engineering program at NC State and UNC.

“Two years ago, I spoke with Zhen Gu about the significant clinical need for precise delivery of blood thinners,” says Caterina Gallippi, a co-corresponding author and associate professor in the joint biomedical engineering program. “We, together with Professor Yong Zhu in the mechanical engineering department at NC State, assembled a research team and invented this patch.”

The patch incorporates microneedles made of a polymer that consists of hyaluronic acid (HA) and the drug Heparin. The polymer has been modified to be responsive to thrombin, an enzyme that initiates clotting in the blood.

When elevated levels of thrombin enzymes in the bloodstream come into contact with the microneedle, the enzymes break the specific amino acid chains that bind the Heparin to the HA, releasing the Heparin into the blood stream.

“We will further enhance the loading amount of drug in the patch. The amount of Heparin in a patch can be tailored to a patient’s specific needs and replaced daily, or less often, as needed,” says Jicheng Yu, a Ph.D. student in Gu’s lab and the other co-lead author of the paper. “But the amount of Heparin being released into the patient at any given moment will be determined by the thrombin levels in the patient’s blood.”

The research team tested the HA-Heparin smart patch in a mouse model. In the experiments, subjects were injected with large doses of thrombin, which would result in fatal blood clotting of the lungs if left untreated.

In the first experiment, mice were either left untreated, given a shot of Heparin, or given the HA-Heparin smart patch. The mice were injected with thrombin 10 minutes later. Fifteen minutes after the thrombin injection, only the mice who received no treatment died.

In the second experiment, the thrombin was injected six hours after treatment. Fifteen minutes after the thrombin injection, all of the mice with the HA-Heparin smart patch were fine, but around 80 percent of the mice that received the Heparin shot had died.

“We’re excited about the possibility of using a closed-loop, self-regulating smart patch to help treat a condition that affects thousands of people every year, while hopefully also driving down treatment costs,” Gu says. “This paper represents a good first step, and we’re now looking for funding to perform additional preclinical testing.”

Story from North Carolina State University. Please note: The content above may have been edited to ensure it is in keeping with Technology Networks’ style and length guidelines.