Differences in software can significantly skew the results of medical scans commonly used in clinical care and research, according to new findings.

The lead author was Larry Alan Pierce, a University of Washington research scientist in the Department of Radiology’s  Imaging Research Lab. Paul E. Kinahan, UW professor of radiology, was the principal investigator.

Pierce, Kinahan and their colleagues looked at software for viewing images generated by positron emission tomographic or PET scanners.  These devices create three-dimensional images of processes within the body. PET scans are most often used to detect cancers and cancer metastases and to follow tumor response to cancer treatment.  PET scans also can help assess the function of the brain, heart and other tissues. 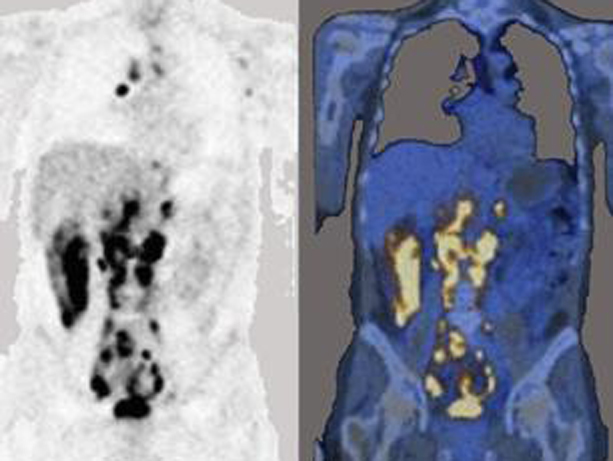 PET scans can both image tumors and show their metabolic activity. Courtesy of UW Radiology.

A patient undergoing a PET scan receives a small amount of radioactive material. This isotope is bound to a molecule that is taken up and concentrated in the part of the body the clinician or researcher wants to examine, such as tumor tissue. The PET scanner detects radiation given off by the isotope. That information is then processed by software that analyzes the data. The software then produces a three-dimensional image that reveals where in the body the isotope has concentrated.

In the recent study, the researchers wanted to see whether these processed images appeared the same when they were viewed with different software packages.

To do this, they created a standardized image file, called a digital reference object, in which all the data values were known. They sent the file to 16 collaborating sites where the files were viewed with 21 different software packages. Their collaborators were asked to report back certain measurements from the images their viewing software generated.

“We were surprised that these software packages, most of which are FDA-approved and some of which can cost as much as $100,000, gave such different results,” Kinahan said.

It is not clear why the different software packages yielded different results, but many have algorithms to smooth or enhance images. This may result in images that do not accurately represent the data from the original PET scan file.

One remedy, Kinahan and Pierce suggest, would be for centers to adopt a standard reference file to check against. In this way, radiology staff could see whether they are getting different values from different software and make adjustments as necessary.

“Ultimately, we hope that the manufacturers of medical imaging software will work together to standardize their products and reduce this variability,” Pierce said.