This turbocharged thermal cycling greatly expands the clinical and research applications of the polymerase chain reaction (PCR) test, with results ready in minutes instead of an hour or more.

The PCR test, which amplifies a single copy of a DNA sequence to produce thousands to millions of copies, has become vital in genomics applications, ranging from cloning research to forensic analysis to paternity tests. PCR is used in the early diagnosis of hereditary and infectious diseases, and for analysis of ancient DNA samples of mummies and mammoths. 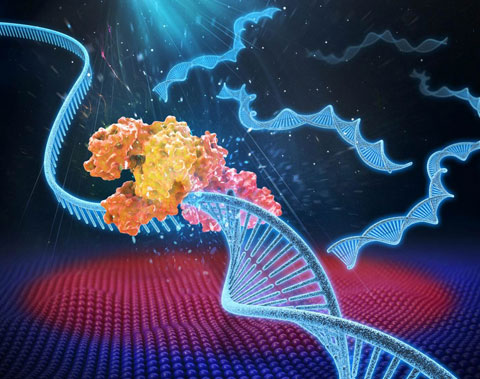 The huge impact of the PCR test in modern science was recognized in 1993 with a Nobel Prize in Chemistry for its inventors, Kary Mullis and Michael Smith.

Using light-emitting diodes, or LEDs, the UC Berkeley researchers were able to heat electrons at the interface of thin films of gold and a DNA solution. They clocked the speed of heating the solution at around 55 degrees Fahrenheit per second. The rate of cooling was equally impressive, coming in at about 43.9 degrees per second.

“PCR is powerful, and it is widely used in many fields, but existing PCR systems are relatively slow,” said study senior author Luke Lee, a professor of bioengineering. “It is usually done in a lab because the conventional heater used for this test requires a lot of power and is expensive. Because it takes an hour or longer to complete each test, it is not practical for use for point-of-care diagnostics. Our system can generate results within minutes.”

The slowdown in conventional PCR tests comes from the time it takes to heat and cool the DNA solution. The PCR test requires repeated temperature changes – an average of 30 thermal cycles at three different temperatures – to amplify the genetic sequence, a process that involves breaking up the double-stranded DNA and binding the single strand with a matching primer. With each heating-cooling cycle, the amount of the DNA sample is doubled.

To pick up the pace of this thermal cycling, Lee and his team of researchers took advantage of plasmonics, or the interaction between light and free electrons on a metal’s surface. When exposed to light, the free electrons get excited and begin to oscillate, generating heat. Once the light is off, the oscillations and the heating stop.

Gold, it turns out, is a popular metal for this plasmonic photothermal heating because it is so efficient at absorbing light. It has the added benefit of being inert to biological systems, so it can be used in biomedical applications.

For their experiments, the researchers used thin films of gold that were 120 nanometers thick, or about the width of a rabies virus. The gold was deposited onto a plastic chip with microfluidic wells to hold the PCR mixture with the DNA sample.

The light source was an array of off-the-shelf LEDs positioned beneath the PCR wells. The peak wavelength of the blue LED light was 450 nanometers, tuned to get the most efficient light-to-heat conversion.

The researchers were able to cycle from 131 degrees to 203 degrees Fahrenheit 30 times in less than five minutes.

They tested the ability of the photonic PCR system to amplify a sample of DNA, and found that the results compared well with conventional PCR tests.

“This photonic PCR system is fast, sensitive and low-cost,” said Lee, who is also co-director of the Berkeley Sensor and Actuator Center. “It can be integrated into an ultrafast genomic diagnostic chip, which we are developing for practical use in the field. Because this technology yields point-of-care results, we can use this in a wide range of settings, from rural Africa to a hospital ER.”