Watching a Tumour Grow in Real-Time

Watching a Tumour Grow in Real-Time

The ability to visualize and characterize the composition of a tumour in detail during its development can provide valuable insights in order to target appropriate therapeutics. The polymer chemist Prof. Dr. Prasad Shastri, core member of the cluster of excellence BIOSS Centre for Biological Signalling Studies, and the BIOSS graduate Jon Christensen, in collaboration with the biomedical researcher Dr. Daniel Vonwil from the University of Freiburg, have visualized and quantified the growth and composition of breast tumours over time in a living animal. 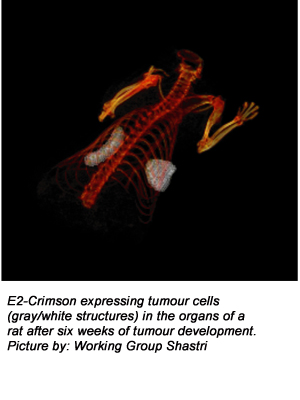 Diagnosing and treating tumours remains one of the grand challenges of medicine in the 21st century. For the translation of laboratory findings into human patients, animal models play a critical role. O ne way to visualize internal structures in living systems is to use light to selectively illuminate certain tissue, and analyse the reflected light to determine the structure. In such light-based imaging techniques, fluorophores - used as dyes - provide specificity and contrast, to distinguish one tissue from the other and to delineate specific tissue components.

The researchers from the University of Freiburg engineered breast cancer cells to express E2-Crimson - a protein that absorbs light in the far-red spectrum - and then grew these cells in a living system to form tumours. The scientists achieved the visualization of the tumour in real-time by illuminating the tumour expressing E2-Crimson with near infrared light followed by reconstruction of the tumour image using fluorescence molecular tomography. This enabled them to make two important findings: During the first four weeks of tumour development, the tumour volume increased not due to the increase in the tumour cells but due to the support matrix they were synthesizing. After four weeks, however, the tumour underwent a dramatic increase in the number of tumour cells. These new findings and the ability to provide visual and quantitative information on phases of tumour growth is important for selection of treatments and delivery of cancer drugs in the future.