Bier, research professor of chemistry and director of Carnegie Mellon’s Center for Molecular Analysis, and graduate student Logan Plath presented their findings in a poster session at the American Society for Mass Spectrometry Conference on Mass Spectrometry and Allied Topics.

“It is important to study virus particles because they are everywhere on our Earth and in enormous numbers. They are not all bad for humans and, in fact, it could be said that bacteriophages are essential for life as we know it,” Bier said. “We need to understand the good from the bad to better understand nature and how we can best take advantage of these molecular forms.” 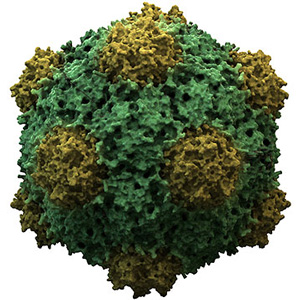 Mass spectrometers separate ionized molecules based on their mass-to-charge ratio. One limitation of mass spectrometry is in the analysis of macromolecules. Most instruments are unable to efficiently detect such large molecules at low charge states or must resort to creating high charge states that require high-resolution mass analysis. As a result, most researchers don’t analyze whole macromolecules. Instead, they break down macromolecules into smaller parts in wet chemistry laboratories and analyze the subunits. While effective, this wet lab process can be time consuming and doesn’t allow researchers to study intact macromolecules directly in the gas phase.

Using samples of cowpea mosaic virus gathered and purified by the lab of Case Western Reserve Univ.’s Nicole Steinmetz, Bier’s team used mass spectrometry to weigh and separate a mixture of two variants of the virus. One contained RNA1 and weighed 5.65 megadaltons; the second contained RNA2 and weighed 4.84 megadaltons. These weights were close to the theoretical weights that had been proposed for the virus particles.

Bier hopes that the technique, which he calls a form of “heavy ion mass spectrometry,” can be used to analyze and study other viruses, and will be helpful in understanding the robustness of viral structure, the mechanics behind viral infection and provide new ways of virus detection and treatment. He also plans to continue to use the technique to study other types of heavy ions.