Complete the form below to unlock access to this Audio Article: "3D Spheroid Culture Trends "

Three dimensional (3D) cell culture has been an area of increasing interest and relevance across a wide breadth of fields for some time now. One type of 3D structure generated in vitro are spheroids. These may also be referred to as microtissues, embyroid bodies, organoids or tumorspheres and are defined as spherical aggregates of proliferating, quiescent, and necrotic cells in culture that retain 3D architecture and tissue-specific functions. In recent year’s 3D spheroid cultures have come to the fore particularly in the areas of cancer research, drug discovery and toxicology, mainly because they are amenable to generation in large numbers of relatively consistent size; they can be counted and morphologically measured by a variety of approaches and instruments; and show great similarity to the way tumours develop. This has spawned significant vendor investment in spheroid generating consumables as well as application notes on how to undertake their image analysis. Some of the first research on spheroids focused on their formation in hanging drop cultures, subsequently a range of alternative methods, microplates and media for spheroid generation have emerged. In contrast to spheroids other 3D approaches such as organotypic co-cultures and biomimetic tissue constructs, tend to have wider general applicability, and are proving useful in basic disease modelling, regenerative medicine and tissue/organ engineering. Alternative approaches to 3D spheroids are not considered in this article.

In May 2015 HTStec undertook a market survey on three dimensional (3D) spheroid culture mainly among research labs in pharma, biotech and academia. The survey was initiated by HTStec as part of our ongoing tracking of this emerging life science marketplace, and to update and extend HTStec’s previous more general market report on 3D Cell Culture Trends (published July 2013). The objectives were to understand respondent's current interest in, experience of and progress made in applying 3D spheroid culture/generation technologies. This article contains ‘selected findings’ from the HTStec market report, 3D Spheroid Culture Trends 2014. It is intended to provide the reader with a brief insight into recent market trends. It covers only 11 out of the 30 original questions detailed in the full report. The full published report should be consulted to view the entire dataset, details of the breakdown of the responses for each question, its segmentation and the estimates for the future. Please click here for more information. 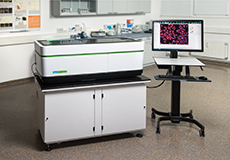 The Opera Phenix™ High Content Screening System is the premier confocal solution for high-throughput, phenotypic screening and assays involving complex models, such as 3D spheroids. Its innovative optical design lets you generate richer information through extremely sensitive imaging and at higher throughput through simultaneous acquisition – without the issue of crosstalk. 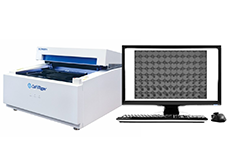 The SCREEN Cell3iMager is the fastest spheroid-optimized bright field imager, enabling multi-plate analysis and label/reagent-free spheroid measurement in less than 2 minutes per plate. It rapidly determines single or multiple spheroid count per well, as well as diameter, area, pseudo volume, and circularity of individual spheroids without disrupting spheroid biology.

“The Cell3iMager is optimized for label-free, rapid assessment of 3D spheroid size and morphology, offering non-disruptive measurement of 96 spheroids in less than 2 minutes.”

Why spheroids were chosen over other approaches to 3D culture:

The most important criteria for choosing to focus research on 3D spheroids versus other approaches to 3D culture are given in Figure 1. This showed that relevance of studying tumor biology was ranked the most important criteria. This was followed by low cost of entry; growing library of supporting/validating publications; and then momentum established behind spheroids. Ranked least important was colleague/peer recommendations. 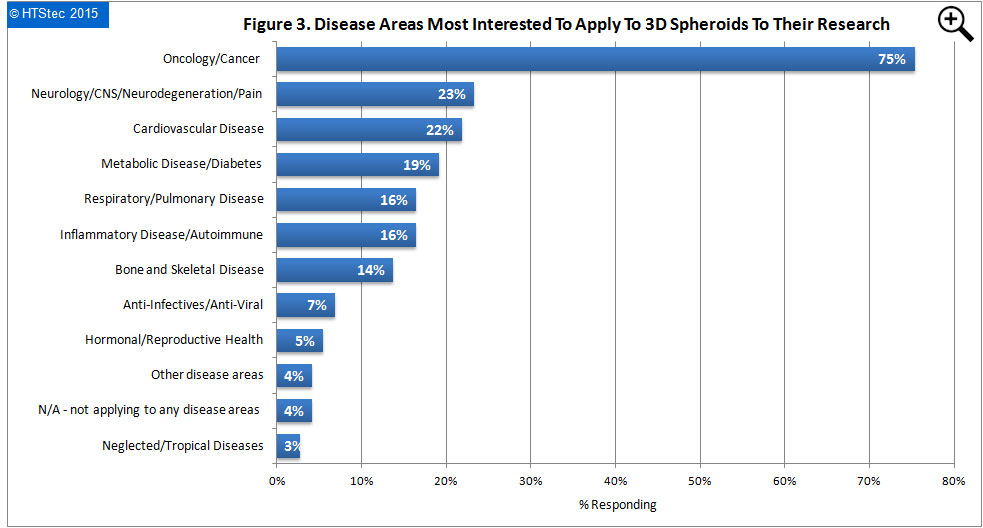 The approaches/technologies most investigated or most used to generate/culture 3D spheroids are given in Figure 5. Overall investigation plus use (i.e. awareness) was greatest for hanging drop plates (60% awareness). This was followed by ultra-low attachment plates - coated with hydrophilic hydrogel (53% awareness); ultra-low attachment plates - coated with biocompatible synthetic polymer (48% awareness); self-made hydrogel 3D forms in dish culture (44% awareness); micro-space plates with non-adherent coating (39% awareness); and then low viscosity suspension medium (32% awareness). Least investigated/used to generate/culture 3D spheroids were magnetic nanoparticles for the levitation/bioprinting of cells (12% awareness).

The preferred microplate type (irrespective of coating, scaffolds or medium) for 3D spheroid culture are given in Figure 6. Most preferred was culture in flat-bottomed plates (47% wanting). This was followed by round-bottomed plates (25% wanting), then hanging drop plates (22% wanting); and finally structured or patterned plates (only 6% wanting). In addition, the kind of 3D spheroid culture format most survey respondents want to achieve was a single spheroid per well or drop; with a spheroid size of 100-200um diameter, cultured in a 96-well plate format.

Assay types have applied or plan to apply to isolated 3D spheroids: 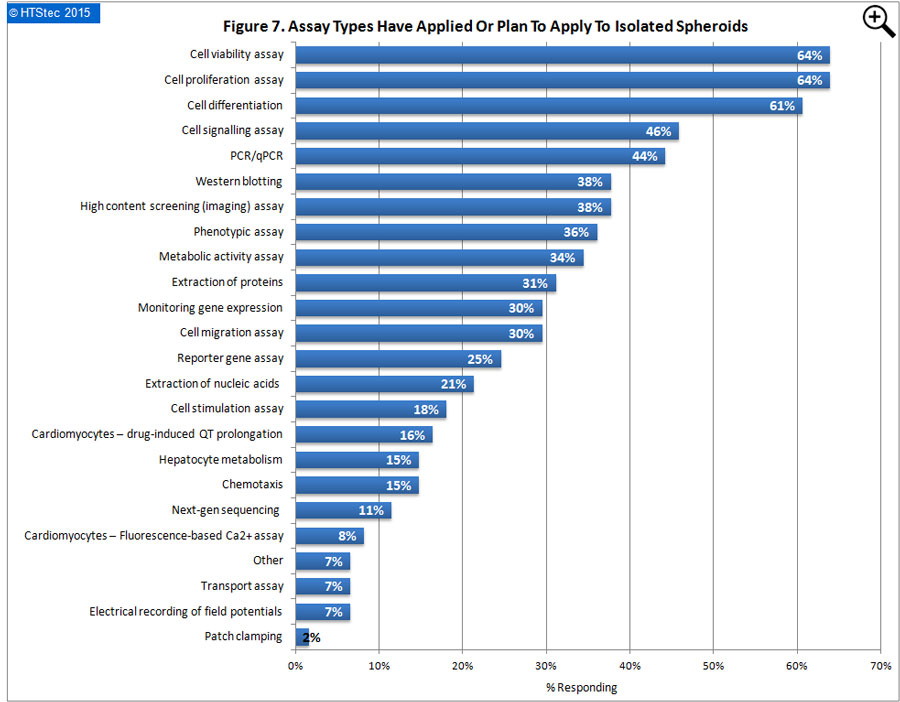 The assay types survey respondents have applied or plan to apply to isolated spheroids are reported in Figure 7. This showed that cell viability and cell proliferation assays were the most popular assay types (with 64% applying both assay types). This was followed by cell differentiation (61% applying); cell signalling assay (46% applying), PCR/qPCR (44% applying), and then western blotting and high content screening (imaging) assay (38% applying both). The least interest was for applying electrical recording of field potentials and patch clamping to isolated spheroids.

Instrumentation most used to assess/monitor spheroid cultures and what they want to achieve from such investigation: 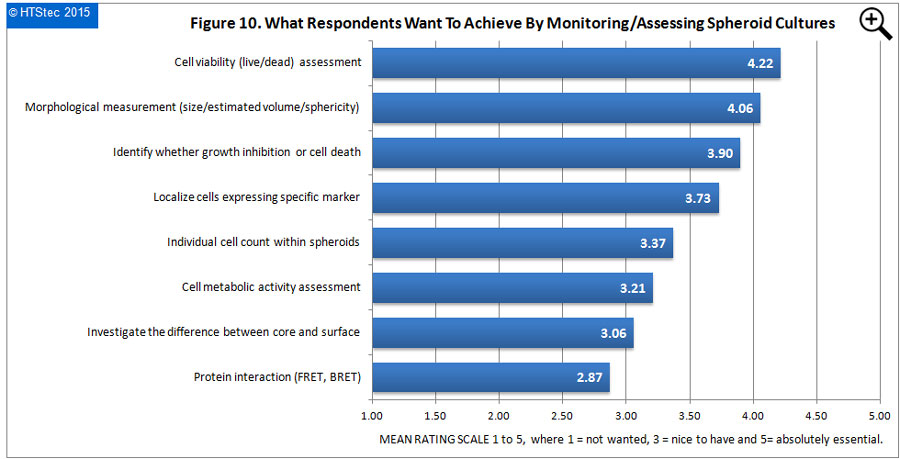 The level of success so far achieved with 3D spheroid cultures is reported in Figure 11. Success is defined in terms of measurable improvement or advantage over comparable 2D cultures e.g. increased cell viability, proliferation, differentiation, expression of biomarkers, metabolism etc. This analysis showed that most (32% responding) reported that they had achieved moderate success (some improvement) in 3D spheroid culture. A further 23% reported they had achieved major success (significant improvement). Only 17% reported minimal success (limited improvement), with the remaining 28% answering N/A - insufficient data to say. The median time frame for 3D spheroid cultures to become the ‘established’ 3D culture platform of choice for drug research was 3-5 years.

The selected findings reported above have shown  the most important criteria for choosing to focus research on 3D spheroids, over other approaches to 3D culture, was the relevance to studying tumor biology. Despite the potential of spheroids to impact other areas, the main area of interest/activity involving 3D spheroids was still basic research. The disease areas where survey respondents were most interested in applying 3D spheroids was within the oncology/cancer disease area. The median level of implementation of 3D spheroids into most survey respondents existing research activities today (2015) was minimal (<10% effort). The approaches/technologies most investigated or most used to generate/culture 3D spheroids were hanging drop plates and ultra-low attachment plates (coated with hydrophilic hydrogel). The preferred microplate format (irrespective of coating, scaffolds or medium) for 3D spheroid culture was a 96-well flat-bottomed plate, with a single spheroid, sized 100-200um diameter, per well or drop. The assay types survey respondents have most applied or plan to most apply to isolated 3D spheroids are cell viability and cell proliferation assays. The vendors/suppliers that first comes to the mind of survey respondents as the leading players in 3D spheroid generation/culture were Corning and InSphero. The instrumentation most used by survey respondents to assess/monitor the status of 3D spheroid cultures was the microscope (i.e. phase, fluorescence or confocal) with cell viability (live/dead) assessment what they most wanted to achieve from monitoring/assessing spheroid cultures. The level of success so far achieved with 3D spheroid cultures by most respondents was moderate success (some improvement), with 3-5 years the anticipated time frame for 3D spheroid cultures to become the ‘established’ 3D culture platform of choice for drug research.

Significant progress has been made in 3D spheroid generation and culture over the past decade. Yet there remains room for improvement, particularly in the areas of consumables pricing, complexity of the handling/formation/refeeding process, and the length of time required to form spheroids versus the period of cultivation supported (e.g. needed to generate hypoxic core). Although methods for 3D imaging and analysis are available, more accurate ways of determining spheroid volume, not just based on diameter, are still required. As are high speed, high throughput methods to measure spheroid growth curves at moderate cost. Consumables budget breakdown indicates that plates specifically structured or coated for spheroid generation are purchased to a greater extent than hanging drop plates. This trend suggests that the simpler spheroid processing enabled by ultra-low attachment plates may win out over the complexity of manipulating spheroids in hanging drop cultures. It will be interesting to see how this spheroid research evolves over the coming years.