Drugs are used to prevent, alleviate and treat a variety of illnesses, ranging from the common flu to acute infection to chronic diseases like arthritis. Although the expenditure for drug development has been increasing, only ~10% of all drugs in Phase 1 eventually gain regulatory approval by the US Food and Drug Administration (FDA), with oncology drugs having the lowest likelihood of success. The majority (39%) of those that failed to get approval were due to a poor understanding of pharmacokinetics which has an impact on a drug compound’s efficacy, safety and toxicity. In this article, we will learn about the four main stages of pharmacokinetics – absorption, distribution, metabolism and elimination (ADME) and discuss the factors that influence them.

The first stage of pharmacokinetics is absorption which refers to the way that a drug is being absorbed from its pharmaceutical formulation into the bloodstream. One major factor influencing absorption is the route of drug administration. There are a variety of different routes including oral (swallowing and ingestion), nasal (inhalation), transdermal (through skin), ocular and intravenous injection and these routes are chosen depending on the location of target tissues. Intravenous injection is the only method in which the drugs can directly enter the bloodstream while in the other methods, the drugs must cross a membrane before entering the bloodstream. For instance, ingested drugs must cross the gastrointestinal membrane in the digestive tract, and drugs administered to the eye need to cross the epiretinal membrane. END_OF_DOCUMENT_TOKEN_TO_BE_REPLACED

How well a drug is being absorbed into the bloodstream affects its bioavailability and the goal is to maximize drug bioavailability. Choosing a drug administration route is not a simple process, because each method has specific advantages and disadvantages. In the case of intravenous injection, the bioavailability will be 100% but it is an invasive process and can deter consumers who have a phobia of needles. On the other hand, while oral drug administration is usually the preferred route due to ease of acceptance by consumers, factors such as drug formulation (i.e., whether drugs can be packaged as capsules, solutions, tablets), physicochemical properties (such as compound solubility), gastrointestinal transit time and difficulty in permeating intestinal wall can significantly reduce drug bioavailability.

Technological advances that enhance efficacy and safety also influence drug administration routes. For instance, Dr Zhen Gu, professor of bioengineering at the University of California, has developed transdermal patches for self-regulated delivery of insulin and glucagon, as well as transdermal delivery of drugs for cancer therapy.

Gu says that transdermal patch for drug delivery is becoming more prevalent as it can improve efficacy through combinatorial sensing and on-demand drug release, and safety by facilitating patient compliance and easy removal of patch in the event of adverse side effects. He also expects that as electronic devices become smaller and cheaper and with the help of artificial intelligence for precise dosage, the use of transdermal drug delivery systems will become more popular.

There are four main ways a drug molecule can transverse the cell barrier membrane and get into systemic circulation. The first mechanism is passive diffusion which does not require energy and simply relies on a concentration gradient. A drug molecule would diffuse from a region of higher concentration to a region of lower concentration. Drugs that are lipid-soluble and exist in un-ionized forms diffuse more readily across lipid cell membranes as they are more lipophilic than their charged counterparts. The second mechanism is passive-assisted diffusion which has the same transport principle as passive diffusion, except with the aid of carrier proteins on the cell membrane that act as influx pumps. Note that there are also protein transporters such as P-glycoprotein that act as efflux pumps to transport drug compounds back into the interstitial spaces. The third mechanism is active transport, whereby energy is spent to enable the transport of drugs across the cell membrane. The last mechanism is endocytosis which involves the encapsulation of the drug, along with other extracellular materials, and subsequent fusion with the cell, causing it to be internalized.

How Are Label-Free Technologies Used in Early Drug Discovery? 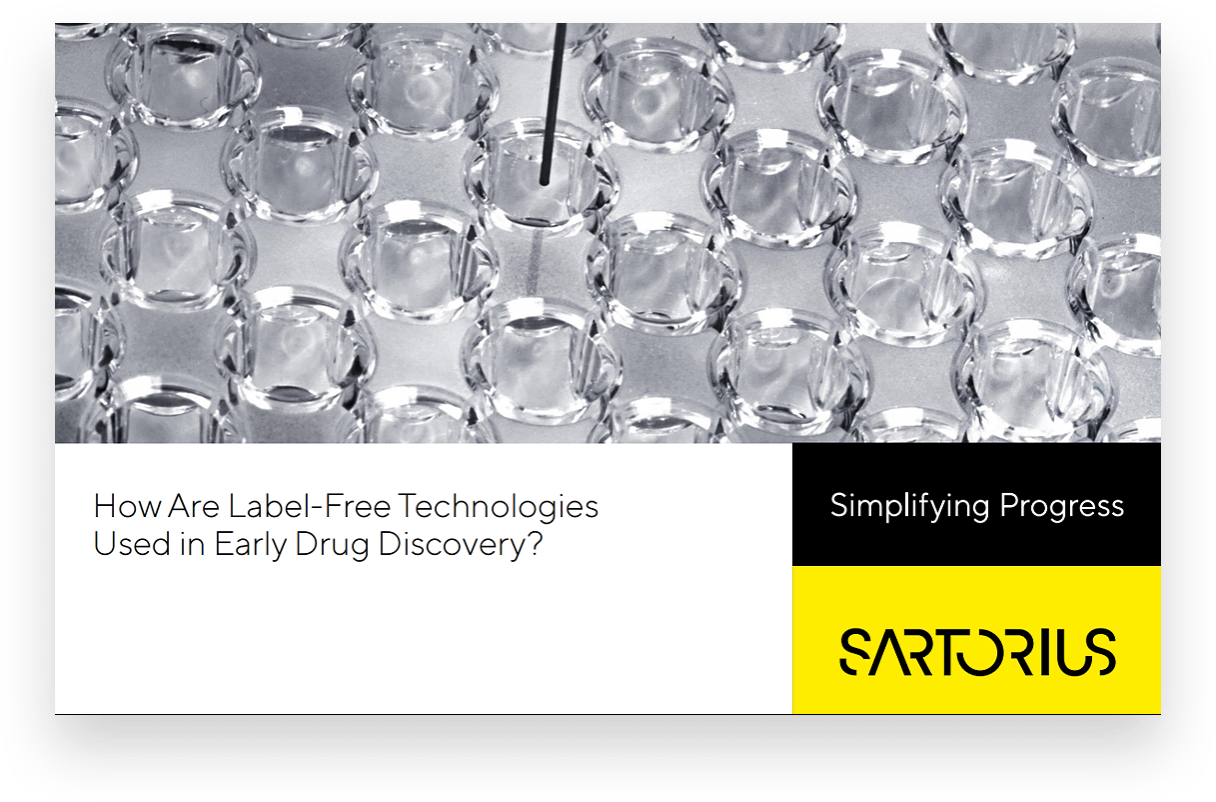 Most small molecule drugs and biologics, including monoclonal antibodies, interact with a therapeutic target to alter its function. Traditional analytical techniques such as fluorescence-based assays involve tagging analytes or secondary reagents with a fluorescent moiety. Labeling is typically not site-specific and can lead to structural alterations that may affect its activity. Download this eBook to learn about label-free solutions that reduce the time it takes to identify, select and optimize drug candidates and allow for high-throughput target specificity analysis.

After a drug molecule enters the bloodstream, it is distributed across the interstitial (spaces surrounding cells) and intracellular fluids. Cells and tissues receive variable amounts of the drug which is also retained for different time periods.

Drug distribution is affected by vascularity of the tissues. Organs such as the lungs, liver and kidney which are highly vascularized tend to receive more of the drugs. Another major factor influencing drug distribution is binding to plasma proteins, such as albumin, glycoproteins and lipoproteins. These proteins can bind to drugs preventing them from being transported to tissues and into cells. Some kidney conditions that involve elevated plasma proteins can affect drug distribution. The molecular size of a drug molecule also influences how well it can be taken up, distributed and retained.

Drug distribution into the brain is particularly challenging due to the highly selective blood–brain barrier formed by tightly connecting endothelial cells. This barrier prevents solutes contained within the circulating blood from crossing into the extracellular fluid within the brain. To facilitate drug distribution into the brain, strategies are being explored, such as inhibiting brain-to-blood efflux transporter activity, enhancing the activities of blood-to-brain transporters for different biomolecules and even ultrasound stimulation of blood vessels surrounding the blood–brain barrier. Researchers have also created materials known as nano-hydrogels that can encapsulate chemotherapeutic drugs and be functionalized with brain-targeting peptides for enhanced drug distribution into the brain.

“Localized drug distribution is important to ensure maximum drug efficacy and safety. In that aspect, materials like hydrogels can be very helpful to control drug distribution,” said Dr Owen S. Fenton, assistant professor of chemical and biomolecular engineering at the National University of Singapore.

Fenton adds that hydrogel materials can modulate the local distribution of drugs during delivery and can mitigate challenges associated with repeat dosing including patient non-compliance. Additionally, as the medical field further explores biologic and cell-based therapies, hydrogels will continue to serve as an important material class to improve drug delivery.

Once a drug enters the body, it begins to be metabolized by the respective tissues and cells it is distributed to. The term “metabolites” refers to the products produced when biomolecules like drugs are metabolized. After it has been metabolized, a drug may become inactivated, toxic or altered into a form that makes it reactive with other drugs and biomolecules. END_OF_DOCUMENT_TOKEN_TO_BE_REPLACED

As drugs tend to be distributed and metabolized to highly vascularized liver tissues, it is particularly important to characterize drug toxicity there. The adverse outcome pathway concept is a useful framework for drug discovery professionals, helping to glean a more comprehensive understanding of the molecular and cellular sequence in which toxicity happens. This model presents possible metabolic pathways involved in drug metabolism and suggests methods to characterize drug safety and toxicity.

Elimination or excretion is the stage whereby metabolized drug compounds are removed from the body – through urine, feces, sweat and exhalation. The most common elimination route is via the kidneys. Unbound drug compounds can be filtered through the glomerular. The approximate molecular weight cut off for this process is 30–50 kDa. It is critical that after being metabolized, the resulting metabolites can be excreted as their accumulation may lead to adverse effects. In general, lipid-soluble compounds are more prone to accumulate than water-soluble ones.

ADME studies are helpful tools to predict and optimize the drug discovery process. Drug discovery typically starts with a vast drug compound library which must be  tested to determine individual absorption and solubility properties, before being tested in in vitro and in vivo assays to understand their distribution, metabolism and elimination. A variety of in vitro (96 well plate fluorescence read out, 2D cell culture, 3D microfluidic etc.) and in vivo (fruit flies, zebrafish, rodents) assays are available for characterizing the ADME profiles of drugs. However, such testing can be expensive as well as time and labor intensive, and some methods lack physiological relevance to human disease.

Researchers have also developed computational models to enable cheaper, higher throughput prediction of physicochemical properties of drug compounds libraries by comparing drug candidates to known drug properties. Additionally, in silico 3D models of cells and tissues have also been created to understand how different drug properties like lipophilicity and molecular size can affect the ADME process.

The need for drugs with greater efficacy and safety has never been greater due to the rising prevalence of acute and chronic diseases. The ADME process provides an excellent framework for drug developers and virtual, computational models are helping to complement traditional physical approaches in efforts to accelerate drug discovery.