Automated patch clamping (APC) systems have now been available commercially for about 15 years. APC platforms have progressed to play a key role in ion channel drug discovery, offering a higher throughput alternative to traditional electrophysiological investigations made using manual patch clamp. APC technology more than any other, has opened up the field to wider investigation, made ion channels more accessible as drug targets and facilitated the drive towards the highest possible data quality. APC systems have evolved considerably in recent years with the latest (third) generation platforms offering high quality (MΩ seal resistance) simultaneous patch recordings from 384 or 768 wells and seamless integration into screening robots. Despite these advances APC has faced strong competition from fluorescence-based assays in some areas of drug discovery, most notably primary screening (HTS). This is mainly attributable to misconceptions about the lack of high throughput and APC consumable (patch plate) pricing. The latter has recently been lowered to a level (e.g. Nanion is now priced at €0.2 per data point) where 384 systems can finally bridge the gap between primary ion channel drug screening (where APC is used today by only a minority of labs) and secondary screening/hit-to-lead follow-up (where APC is used today by the majority of labs).

The comprehensive in vitro proarrhythmia assay (CiPA) initiative aims to replace the current preclinical hERG ion channel assay required under the ICH S7B safety pharmacology guidelines and the clinical TQT study, which provides a surrogate marker of proarrhythmia, with more translationally relevant assessments of proarrhythmic risk. CiPA aims to achieve this by evaluating proarrhythmic risk of evolving drug candidates based on an understanding of the electrophysiologic mechanisms responsible for proarrhythmia linked to torsade de points (TdP) and QT prolongation. The three components of CiPA include voltage clamp assessment of human ion channels (hERG plus 3-6 additional cardiac ion channels), in silico reconstruction of electrophysiologic activity and confirmation using in vitro assays on stem cell derived human cardiomyocytes to test effects on human cells. It is through expansion of the in vitro components of nonclinical safety evaluation that APC systems are expected to prove a key enabling technology in the future implementation of CIPA.

In September 2015 HTStec undertook a market survey on ion channel drug screening using automated patch clamping (APC) technology, mainly among research labs in pharma, other screening labs and academic research. The study was initiated by HTStec as part of its ongoing tracking of life science marketplaces and to update HTStec’s previous report on the subject (published April 2014). The objective of this global benchmarking study was to comprehensively document current practices, preferences and metrics in ion channel drug screening using APC technology. The questionnaire also addressed the use of 384-well APC systems, HTS integration and data analysis of APC systems, safety and transporter assays, and fluorescence as an alternative technique to APC. This article contains ‘selected findings’ from the HTStec market report, Automated Patch Clamping Trends 2015. It is intended to provide the reader with a brief insight into recent market trends. It covers only 11 out of the 32 original questions detailed in the full report. The full published report should be consulted to view the entire dataset, details of the breakdown of the responses for each question, its segmentation and the estimates for the future. Please click here for more information.

APC platforms respondents currently have access to in their labs:

Figure 1. APC Platforms Respondents Currently Have Access To In Their Labs

The importance (value) that survey respondents place on certain features found in some APC systems is presented in Figure 2. This showed that survey respondents rated the suitability for different cell types (CHO vs HEK, stem cells, primary) as the most important feature found in APC systems. This was closely followed by assay development friendliness and then rapid solution exchange. Rated the least important was brief temperature pulses (for heat activated channels).

The current (2015) proportion of APC assays made using different cell types is reported in Figure 3. This analysis revealed that the majority (60%) of APC assays involved recombinant cell lines. This was distantly followed by transiently transfected cells (14% use) and then iPSC-derived cardiomyocytes (6% use). All other cell types had less than 3% use.

Factors which would most influence the decision to purchase an APC platform:

Respondents were asked to choose the 3 factors that would most influence their decision to purchase a new APC platform matched to their program/screening campaign needs. The 3 choices (selections) were combined in data presented in Figure 4. Survey respondents chose the quality of the results as the factor which would most influence a decision to purchase a particular brand/model of APC platform. This was followed by throughput, cost of consumables, system stability and then cost per data point. The least influential factors were available assays and degree of automation. 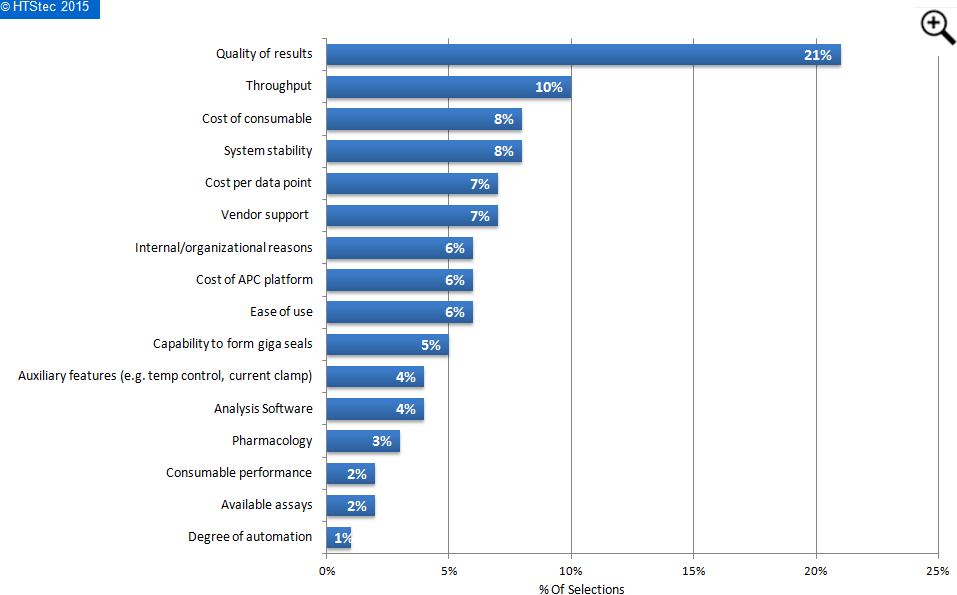 Figure 4. Factors Which Would Most Influence The Decision To Purchase An APC Platform 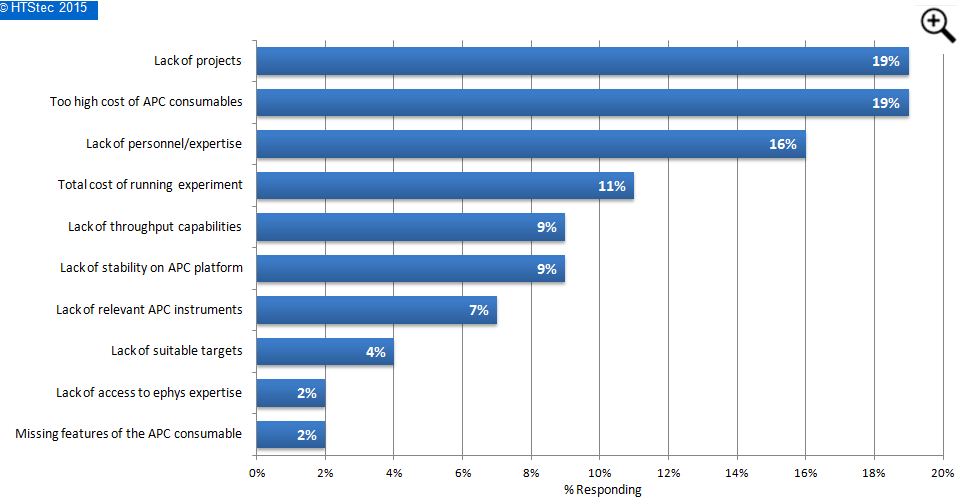 Areas where fluorescence-based assays are still an alternative to APC: 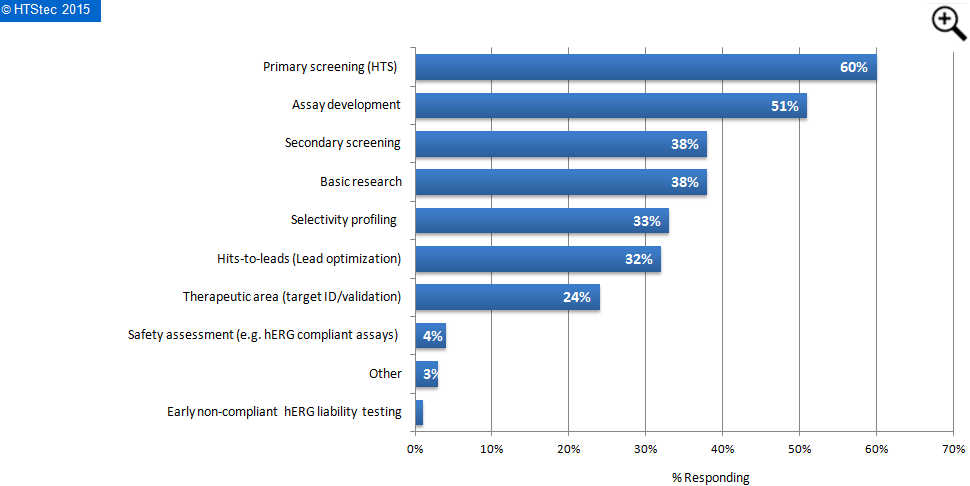 Figure 9. Areas Where Fluorescence-Based Assays Are Still An Alternative To APC

Targets where fluorescence-based assays are an acceptable alternative to APC assays:

Figure 11. Targets Where Fluorescence-Based Assays Are An Acceptable Alternative To APC Assays

The selected findings reported above have shown the most common APC systems available for use in survey respondents labs were Sophion QPatch 8, 16 or HT and Nanion Port-a-Patch. The suitability for different cell types (CHO versus HEK, stem cells, primary cells etc.) was rated the most important feature found in an APC systems. The majority of APC assays involved the use of recombinant cell lines. Quality of the results was the factor which would most influence a future decision to purchase a particular brand/model of APC platform. Apart from their budget available, lack of projects and the high cost of APC consumables were the factors that most prevented respondents from making greater use of APC consumables. The recent introduction of new 384-well APC screening platforms (i.e. MDC Ionworks Barracuda, Nanion Syncropatch 384/768PE, Sophion Qube) is expected to result in APC screening being initiated at an earlier point in the drug discovery process. The majority of respondents had awareness of the FDA CiPA initiative to move safety pharmacology from a predominantly traditional pharmacodynamics approach to in silico and in vitro drug toxicity assessment. Survey respondents expect APC of stem cells/cell lines to feature most highly when fulfilling the CiPA requirements. Fluorescence–based assays are however still routinely used as an alternative to APC for ion channel testing particularly for primary screening (HTS). In this case throughput was ranked the most important driving force to continue to deploy fluorescence-based assays today. Slow voltage-gated channels were the targets where fluorescence-based assays offered the most acceptable alternative to APC assays.

In conclusion, there has never been a more opportune time to access high quality, high throughput APC platforms, with a range of alternative systems and configurations now available. APC appears to be at a tipping point, the market demanded 384 parallel systems, throughput in excess of 20,000 data points per day, patch plates pricing below $0.25 per data point, and seamless integration into HTS systems. Now that all these attributes are finally available will the wider implementation of APC into primary screening prove an unstoppable effect such that a paradigm shift in ion channel screening can finally take place?