COVID-19 hospitalizations are on the rise again across the globe. Health officials are citing many reasons for this turn of events, including the plateau in vaccine supply and demand, the emergence of new virus variants, and a dearth of effective therapeutics for the disease. Epidemiologists predict the SARS-CoV-2 virus will become endemic, like the influenza virus, so the world needs a long-term strategy for managing the disease it causes. Any strategy will likely include the creation of safe and effective antiviral drugs that reduce the severity of COVID-19.

Viruses are notoriously difficult to treat because they hide inside a host cell, and while an antibiotic for bacteria may target common biological processes, a virus doesn’t perform many of these processes itself, instead relying on the host. Inside the host however, coronaviruses create a potential target that may be the key to stopping their replication in the body: replication organelles. Coronaviruses reorganize and recruit host cell membranes to form these organelles, which enable them to reproduce. Researchers have found that by targeting these replication organelles, a drug can stop coronavirus replication and reduce the severity of an infection. My group at Georgia State University is now testing whether these organelles are an effective therapeutic target for SARS-CoV-2 infection. We assessed the effect of various therapeutics on the cell-killing (cytopathic) behavior of SARS-CoV-2 using a bioelectronic assay.

Bioelectronic assays that measure electrical impedance enable researchers to monitor cell health in real time, non-invasively. The assay employs a multiwell plate with electrodes embedded in the bottom of each well. Each well sends an electrical signal across its electrodes, measuring how much the contents of the well impede, or obstruct, the signal. The health and integrity of the cells is indicated by the level of impedance: Impedance rises as cells attach and grow, and falls as the cell membrane destabilizes, they die, and detach.

Bioelectronic assays do not face the same limitations as live-cell imaging techniques. To visualize cells, researchers often use dyes or probes that can alter the biology or viability of cells. These labels can impair signaling pathways, create background noise that reduces the sensitivity of the assay, or directly disrupt the interactions being tested. Bioelectrodes do not require labels or dyes; rather, they monitor the cell health without disturbing the cells.

Since they require no additional reagents or complicated steps, bioelectronic assays are simple to run and amenable to higher throughput testing. Easily quantifiable electrical signals provide a clear measure of cell viability, making analysis straightforward. Because of these advantages, we used a bioelectronic assay to assess the magnitude and kinetics of SARS-CoV-2-induced cell death in response to various therapeutic candidates.

We first examined the impact of SARS-CoV-2 on healthy cells. We cultured healthy Vero E6 cells on a bioelectronic assay plate and then added SARS-CoV-2 virus at various concentrations. As the virus killed the cells, impedance dropped, reaching its minimum between 32 and 72 hours post-infection. The highest SARS-CoV-2 concentrations killed Vero cells faster, demonstrating the utility of this assay in monitoring the cytopathic effect of SARS-CoV-2 over a period of days.

We also examined whether our assay could detect a known SARS-CoV-2 inhibitor, remdesivir, to reduce cell death in response to infection. Our assay showed the drug inhibited cell death at similar concentrations to those identified using plaque assays.

With this validated assay, we then tested the ability of novel drug candidates to reduce the impact of SARS-CoV-2 on healthy cells in a dish. 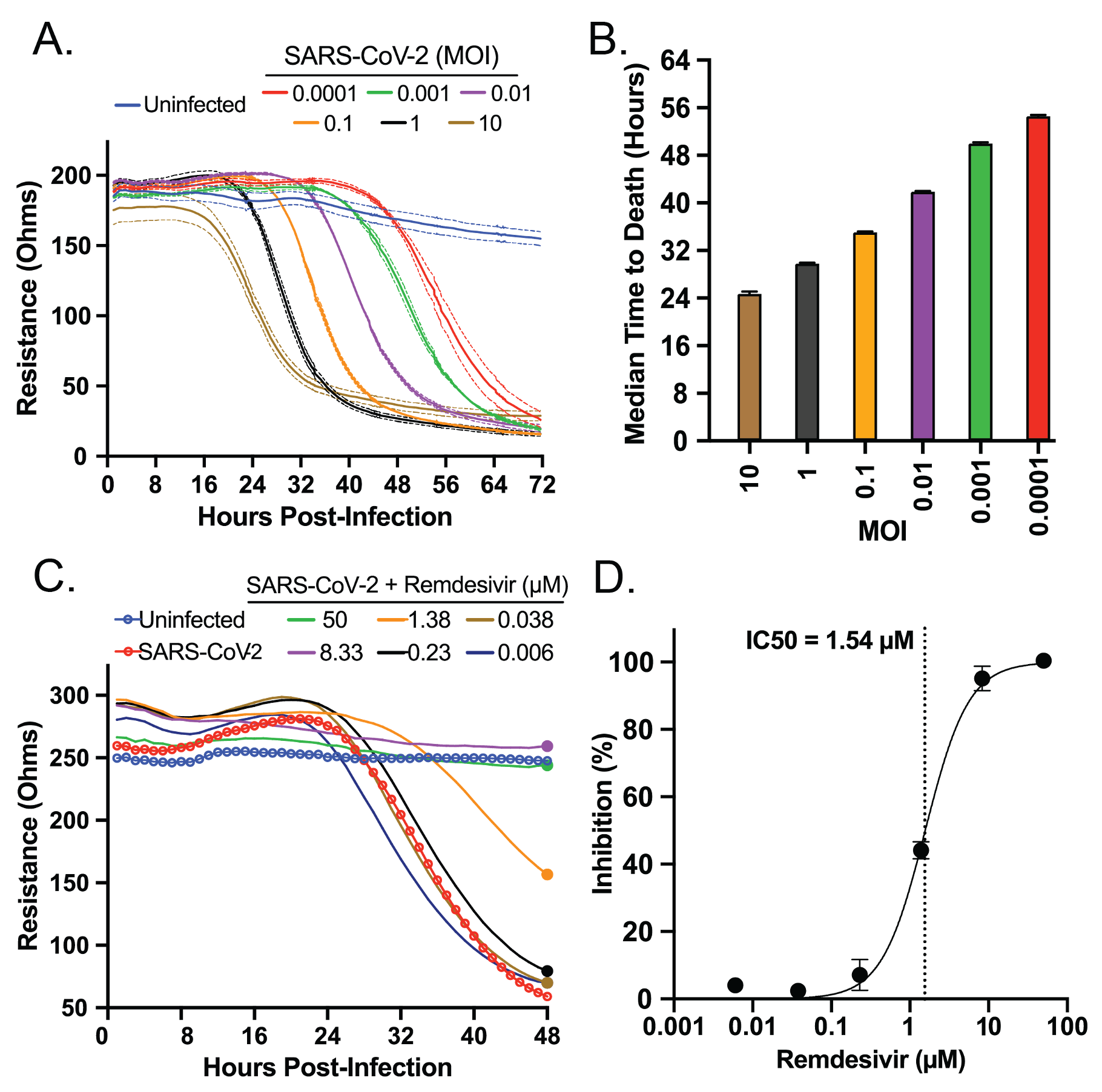 Figure 1: (A) We mock infected or infected Vero E6 cells with SARS-CoV-2 in 10-fold dilutions ranging from 10-0.0001 (viral particles:cells) and measured resistance every minute for 72 hours. Solid lines indicate the mean and dotted lines indicate the standard error of three replicates. (B) We calculated median time-to-death based on raw resistance data for each virus concentration. (C) We titrated remdesivir in 6-fold dilutions ranging from 50–0.006 µM. We infected our cells at a concentration of 0.01:1 and monitored resistance for 48 hours. (D) We measured percent inhibition for remdesivir at various concentrations (solid circles) based on the data from the 48-h time point. Credit: Williams et al., 2021, Cell Reports 36, 109479.

Testing the fatty acid metabolism inhibitors, orlistat and triacsin C, using the same assay, revealed that these compounds also prevented virus-induced cell death. We did not observe toxic effects at higher concentrations as was observed with the VPS34 inhibitors.

Other uses for bioelectronic assays

While these experiments explored potential new antiviral targets for SARS-CoV-2, it’s important to note that these bioelectronic assays lend themselves to several other common virology applications. For example, bioelectronic assays can be used for viral titers, to screen the fitness of viral variants, and to detect the presence and effectiveness of neutralizing antibodies.

Bioelectronic assays extend our ability to quickly study interactions between cells, viruses, and therapeutics in real time over days, in one plate, without interference by labels or tags. In the future, we hope our discoveries will lead to more effective therapeutics for COVID-19 and similar diseases to reduce their impact on the world and help us return to normal.
Related Topic Pages
The COVID-19 Pandemic
Infectious Diseases
The Immune System
Cell Signaling
Vaccine Manufacture and Supply
Advertisement
Chosen for You
Webinar