Complete the form below and we will email you a PDF version of "Cancer Drug Discovery: A Molecular Journey to Targeted Treatment "

The cancer drug discovery process, and cancer research more broadly, has been transformed in the last couple of decades. The journey to modern-day cancer therapeutics commenced in the 1950s. Up till that point, surgery and radiotherapy were the standard of care; however, these modalities failed to treat micrometastases, necessitating additional treatment options. The chemist Paul Ehrlich is credited with coining “chemotherapy” to describe the application of chemicals for treating diseases. He lay the research foundation that led to the first chemotherapeutics that came into use in the 1950s for treating cancer, some of which are still in use today.

Cancer drug discovery has made great advances since its earliest steps. Although cytotoxic chemotherapeutics remain a mainstay for certain cancer types, the field has been transformed by the advent of molecular techniques. Cytotoxic drugs affect healthy cells, as well as the tumor, and thus give rise to a multitude of side effects. To counter this, the focus has shifted to more targeted approaches by leveraging molecular characteristics that are more unique to the tumor than healthy cells. Additionally, a deeper understanding of molecular cancer biology has unlocked the potential of immunotherapeutics, drugs that leverage the immune system to fight cancer.

Knowledge that tumors can harbor specific mutations has opened the door to “precision” or “personalized” medicine in cancer. In this paradigm, each patient receives a treatment regimen tailored to tumor mutations that are “actionable”, for example, a mutation to a specific tyrosine kinase can be treated with an inhibitor selective to that kinase. Pediatric neuro-oncologist Carl Koschmann, from the University of Michigan, is interested in applying this concept to children with brain tumors. Brain tumors are currently the leading cause of cancer-related mortality in children, and Koschmann is seeking better therapies to improve patient prospects. “Traditionally, brain tumors were classified by their histologic cell type, for instance astrocyte or oligodendrocyte. We’ve made so much progress understanding tumors molecularly that the most recent update to the World Health Organization (WHO) classification scheme accounted for important and recurrent molecular tumor characteristics,” he explained. “The appreciation that tumors can harbor specific recurrent mutations pave the path toward targeted therapies, which consider a pediatric brain tumor’s distinctive molecular makeup. For many high-risk brain tumors, traditional cytotoxic chemotherapy is ineffective, unlikely to cross the blood-brain barrier, or both. Precision cancer treatment has the potential to improve patient-specific treatments.”

In his quest for better cancer treatments, Koschmann and his colleagues in the Pediatric MiOncoseq program, led by Drs Arul Chinnaiyan and Rajen Mody, found that matched tumor and germline sequencing improves diagnosis and identifies potentially actionable mutations. “A molecular map to the tumor can lead to clinically meaningful benefits,” explained Koschmann of the precision approach. “In a case study of a pediatric glioblastoma patient, whole-exome and transcriptome sequencing identified mutations in two tumor suppressor genes, a germline mutation in TP53 and somatic mutation to TSC2. Thus, in addition to electromagnetic field therapy, we chose to administer everolimus, which targets the pathways downstream of TSC2, which led to complete remission, which persists now five years from diagnosis. This is a good outcome compared to historical values.”

A larger study of 52 children and young adults seen by Koschmann, Mody, and Chinnaiyan at the University of Michigan led to similar findings. Sequencing uncovered actionable mutations in 63% of the tumors, and informed treatment in 53% of the patients. “We’re seeing tangible clinical benefits from precision oncology in the pediatric population,” Koschmann said with optimism. He led the effort to draft the consensus recommendations for molecular profiling and targeted therapy in pediatric gliomas and hopes that precision medicine will become the standard approach for childhood brain tumors. “With so few therapies currently available, sequencing is really essential for identifying these actionable mutations, or tumor vulnerabilities, which lead to targeted therapies in pediatric tumors.” Koschmann is also leveraging a handheld sequencing technology to detect DNA traces of brain tumor-specific mutations in patient cerebrospinal fluid (CSF). “CSF collection is less invasive than brain tumor biopsy. So, detecting tumor-specific mutations in CSF through this ‘liquid biopsy’ makes it more feasible for us to molecularly monitor tumor progression versus a structural MRI scan,” Koschmann elaborated. This advance placed Michigan Medicine C.S. Mott Children’s Hospital on the list of the country’s most innovative hospitals.

Obstacles do remain, such as brain tumor heterogeneity, which can lead to distinct mutations in various parts of the tumor, and selecting which mutation to target from the actionable mutations identified. Moreover, in brain tumors, there is the added concern of blood–brain barrier (BBB) accessibility. “For drugs to enter the brain, they need to be sufficiently lipophilic that they can cross the BBB by diffusion, but also, they should not be substrates for efflux proteins, which actively eject molecules from the brain, such a P-glycoprotein (P-gp) and breast cancer resistance protein (BCRP),” explained Koschmann. He is also interested in overcoming accessibility challenges imposed by the BBB barrier and developed CNS TAP, a tool to match patients with brain tumors harboring specific molecular characteristics to targeted therapeutics scored by their likelihood of BBB permeability. CNS TAP predicts the optimal agent 85.7% of the time and leads to potential clinical benefit in pediatric patients. The CNS TAP tool is now being incorporated into a prospective precision medicine clinical trial through the multi-site PNOC consortium.

In a preclinical mouse model of PDGRFA-mutant glioma, everolimus improved dasatinib accumulation in the brain and efficacy by survival. Koschmann’s preclinical research has culminated in the Phase 2 clinical trial of everolimus with dasatinib for children with gliomas harboring PDGFR alterations. “We really hope these recent advances will improve survival for children with brain tumors gliomas, but based on what I see in the clinic, I think we’re making progress,” Koschmann concluded. 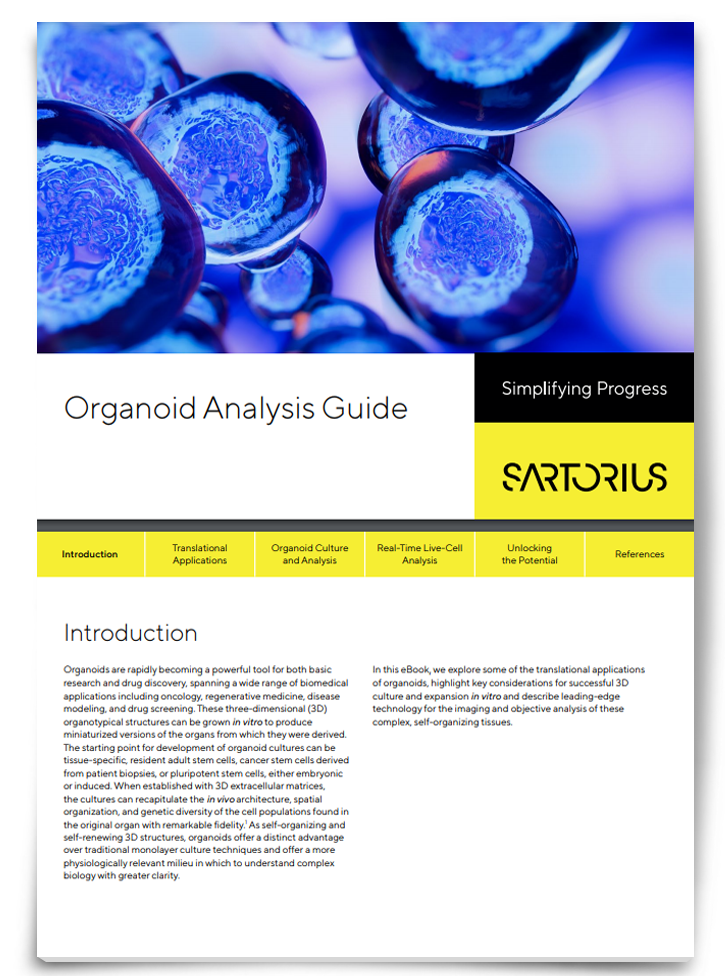 Organoids are rapidly becoming a powerful tool for both basic research and drug discovery, spanning a wide range of biomedical applications including oncology, regenerative medicine, disease modeling and drug screening. These three-dimensional (3D) organotypical structures can be grown in vitro to produce miniaturized versions of the organs from which they were derived. Download this eBook to explore the world of organoids.

Although immunotherapy is perceived as a recent advance, it has a long and storied past. However, the last few decades have seen significant immunotherapy advances through a deeper understanding of immunity in cancer and the advent of biologics. Immunotherapies modulate the immune system; in cancer, they function by recruiting the immune system to combat tumors. As cancer therapeutics, they span immune checkpoint inhibitors, which are antibodies that block inhibitory receptors, triggering immune cell activation, to therapeutic vaccines, which prime immune cells to recognize and destroy cancer cells.

Chimeric antigen receptor (CAR) T cells are another recent and exciting cancer drug development. In this therapeutic approach, T cells are genetically engineered to express a CAR, which contains a binding domain that targets an antigen primarily expressed on cancer, but not healthy, cells. This “targets” CAR T cells to cancer cells, increasing therapeutic specificity. The “chimeric” designation derives from the dual CAR nature; in addition to the antigen binding domain, the CAR also comprises a stimulating domain, which activates the CAR T cell upon binding to the cancer cell, boosting efficacy. “In their earliest clinical applications in the very first cancer patients, we saw that CD19-targeting CAR T cells could drive treatment refractory leukemia into remission in patients with lymphocytic leukemia (CLL) and acute lymphoblastic leukemia (ALL),” explained Professor Carl June of his clinical research at Perelman School of Medicine, University of Pennsylvania, which played an instrumental role in the development of CAR T-cell therapy. These early clinical reports were followed by larger clinical trials June led, in both CLL and ALL participants, which paved the way to the first US Food and Drug Administration (FDA) approvals in 2017 for CD19-targeting CAR T cells for relapsed or refractory B-cell ALL and large B-cell lymphoma.

CAR T cells are currently only FDA-approved for blood cancers, there are no clinically approved CAR T-cell therapies for solid tumors so far. Attempts to evaluate whether CAR T cells may be effective against solid tumors through intravenous or locoregional administration have shown complete or partial responses in case reports of various solid tumors, such as high-grade gliomas, neuroblastomas, breast, malignant pleural mesothelioma, ovarian carcinomas, pancreatic ductal adenocarcinomas and colorectal cancers. However, there are also a few reports of severe toxicities from on-target off-tumor antigen-recognition by CARTs. “Solid tumors are complex and remain challenging due to limited CAR T-cell trafficking into the tumor microenvironment,” June explained of the difficulties facing broader adoption of CARTs for solid tumors. “Moreover, any infiltrating CAR T cells may be blocked by tumor expression of inhibitory immune checkpoints. It might be necessary to combine CAR T cells with checkpoint inhibitors and clinical trials are ongoing. Alternatively, we have employed CRISPR to knockout programmed cell death protein 1 (PD-1), the inhibitory receptor that mediates immune blockade, to improve CAR T cell antitumor immunity in a first-in-human trial.”

Another potential solution also exists. “Advanced genetic engineering of CAR T cells could provide a solution for the treatment of solid tumors,” explained Dr Philipp Rommel, a postdoctoral researcher in Carl June’s laboratory. “We are actively working on engineering more “intelligent” CAR T cells that can be remote-controlled and are able to respond to different biochemical cues in the hostile tumor microenvironment.”

Another issue arising from CAR T-cell therapy is that leukemia cells can develop clones that do not express the CAR T-cell-targeting CD19 antigen, a resistance mechanism termed “antigen escape”, which leads to treatment failure. “The CAR T cell therapy field is actively working on different approaches to overcome antigen escape,” June elaborated. “One idea is a combination therapy that co-administers CAR T cells, which target different antigens. Another is to engineer T cells that express two independent CARs, so-called bicistronic CARs, or a bivalent CAR with tandem targeting domains, e.g., anti-CD19 + anti-CD22 or anti-CD19 + anti-CD20, which are both in clinical trials. There are also studies exploring “epitope spreading”, a mechanism where the first epitope-triggered CAR T-cell response spreads to similar but more diverse cancer epitopes by combining CAR T cells with radiation, checkpoint inhibition, or vaccines.”

One disadvantage of CAR T cells is that the production process is lengthy because they are autologous, patient-specific products. T cells are isolated from the prospective patient, engineered into CAR T cells, and reinfused. “This lengthy and time-consuming process renders CAR T cells relatively inaccessible. To boost their availability, we are investigating allogeneic CAR T cells, or so-called “off the shelf” CAR T cells. This inventory of premade CAR T cells that targets diverse antigens would then be readily available for patients, shortening the time and lowering the cost to treatment.”

Complete the form below to unlock access to this Audio Article: "Cancer Drug Discovery: A Molecular Journey to Targeted Treatment "

Masha Savelieff, PhD
More from this author >
Advertisement
Chosen for You
Infographic