Drug Repurposing Could Open the Door to New Therapies

Drug discovery and development is expensive, time-consuming and complex. The estimated average cost of bringing a drug to market is now $2.6 billion; representing a 140 percent increase over the past ten years. It can take 15 years for a new drug to reach market, and failure rates remain high. That’s why today it is important for companies to explore new methods to reduce the discovery time frame. One approach that is proving productive is drug repurposing powered by artificial intelligence (AI) and machine learning (ML).

Drug repurposing has been in the news recently as it may present an effective strategy to fight the current COVID-19 pandemic, as developing new therapies is too lengthy of a process to be practical for the immediate global challenge. Despite the incredible efforts around the globe, a vaccine is still at least 12–18 months away, so there is a great amount of interest in how existing drugs like antivirals, antimalarials or anti-rheumatics could be used. Alternatively, it may prove that a careful combination of drugs proves to be effective. Currently, there isn’t enough data or evidence to draw strong conclusions from, to say whether something definitively works, but as the body of knowledge grows, AI and ML will help scientists aggregate and interrogate data, to retrieve the most relevant information for a specific purpose.

Drug repurposing has gained momentum in recent years, due to the abundance of data now available for drug researchers to reuse. This can be seen by looking at the increase of the number of papers in abstract and citation database, Scopus, containing both the term “drug” and “repurposing”, between 2005–2019 (Figure 1). 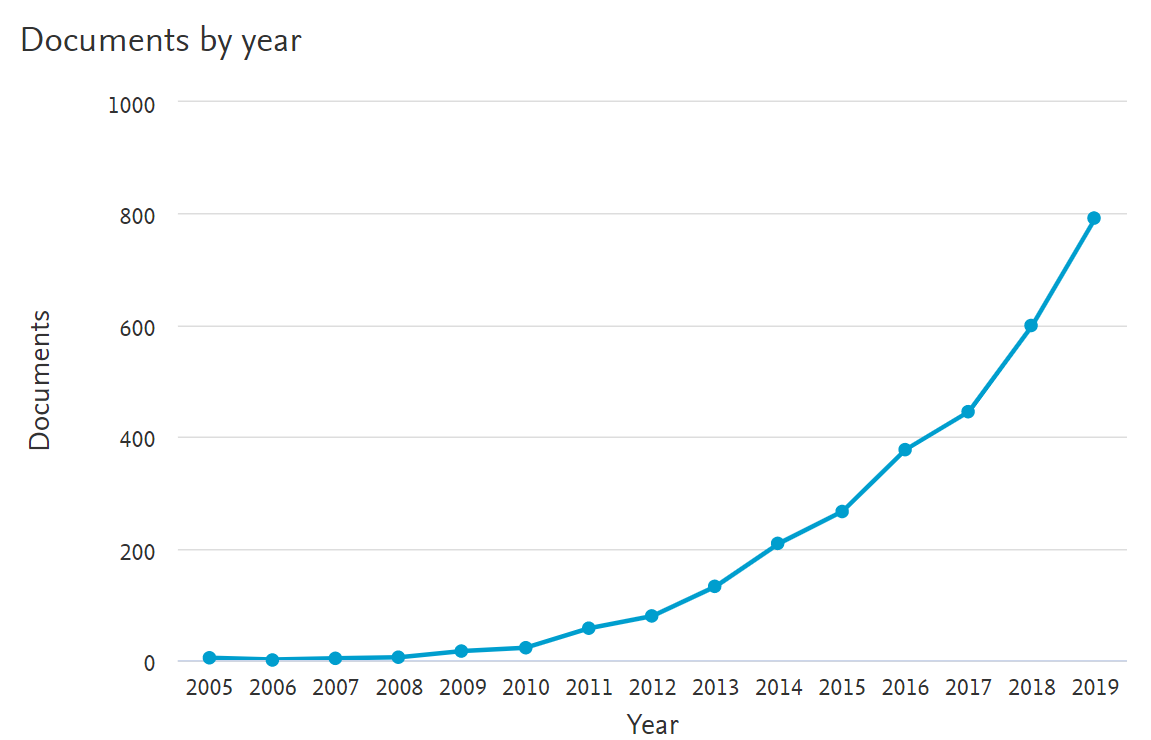 Figure 1. The number of papers containing both the terms “drug” and “repurposing” is increasing over time from 2005 to 2019

In recent years, drug repurposing has made up 25 percent of annual revenue for the pharmaceutical industry, and one-third of US Food and Drug Administration (FDA) approvals correspond to repurposed drugs. A significant benefit of repurposing is that the existing drug has already proven safe in humans and is, therefore, less likely to fail (unless new drug–disease interactions are found). Building on the wealth of post-marketing surveillance already available for approved drugs means they are also more likely to be successful during approvals.

Opportunities for rare and neglected conditions

Drug repurposing is also more effective with a collaborative approach that encourages data sharing between companies, which is why academic institutions and non-profit organizations have a predominant role in the process. As drug repurposing can dramatically reduce the cost of developing new therapies, one of the areas it is most useful is in rare diseases, where traditional approaches to development are commercially unviable. There are more than 7,000 identified rare diseases, but currently only 400 have licensed treatments – repurposing presents one of the only sustainable models for this patient population.

One example where drug repurposing proved successful for a rare disease is the immunosuppressant, rapamycin, originally developed to prevent organ transplant rejection. In 2015, it was the first drug approved for the rare, genetic lung disease lymphangioleiomyomatosis, proving to improve quality of life for patients. The tetracycline antibiotic, minocycline, which is used to treat bacterial infections such as acne, chlamydia and gonorrhea, has been found to relieve the symptoms of patients with Fragile-X syndrome, a genetic disorder that leads to cognitive disabilities. The effectiveness of minocycline as a treatment for Fragile-X syndrome is currently being evaluated in clinical trials.

One collaborative approach proving successful is the use of datathons, where researchers and companies with different skills and domain expertise come together to find new drug candidates for diseases by using existing data and AI tools. A datathon typically looks to identify subgroups of a specific disease and identify suitable therapeutic targets, by analyzing driver mutations of gene expression profiles. Participants then assess already known drugs against these targets using both known and predicted new drug–target interactions, with the overall objective of producing improved therapeutic results (BOX 1 provides an example for chronic pancreatitis).

In 2018–2019, Elsevier was part of a unique non-profit and private partnership datathon, which identified new repurposable drug candidates to treat a painful chronic disease affecting approximately one million people globally; for which there is currently no treatment. The datathon was conducted in partnership with non-profit groups The Pistoia Alliance, Cures Within Reach and Mission:Cure.

The drug candidates below have passed the expert review panel and are being actively considered by Mission: Cure, with a view to proceeding to clinical trials:

To discover which existing drugs may be able to treat incurable diseases or novel conditions, the fundamental need is access to large volumes of data shared between stakeholders. Looking to the future we, as a species, are likely to encounter a number of public health threats, including other new infectious diseases. Recent events around COVID-19 show just how important drug repurposing is now and will be in years to come. Moreover, tools such as AI and ML will be increasingly harnessed to enable us to analyze and exploit the vast quantity of data being produced during drug development projects. At the same time, as funding and reimbursement models continue to prove challenging, methods like drug repurposing are proving to be one way to combat this – providing a better return on investment for payers, payees and healthcare systems alike, and, most importantly, getting effective therapies to the patients that need them most in less time.

Complete the form below to unlock access to this Audio Article: "Drug Repurposing Could Open the Door to New Therapies"