Research efforts aimed at improving our understanding of the role epigenetic factors play in disease have increased significantly in recent years, with epigenetic dysregulation linked to numerous diseases including; several cancers, autoimmune disorders and neurological disorders.1

Epigenetics is the study of modifications to DNA that change the way genes are expressed. It does not alter the underlying genetic code of an individual. Epigenetic modifications affect when genes are turned on and off.

Dr Manel Esteller, Director of the Cancer Epigenetics and Biology Program (PEBC), Bellvitge Biomedical Research Institute (IDIBELL) elaborates: “Epigenetics is the inheritance of gene activity that does not depend on the naked DNA sequence. Thus, are all those chemical modifications in DNA, RNA and proteins that confer the differential activity and identity to the cells and tissues of our body that have identical genomes. The most studied epigenetic marks are DNA methylation and histone modification.” 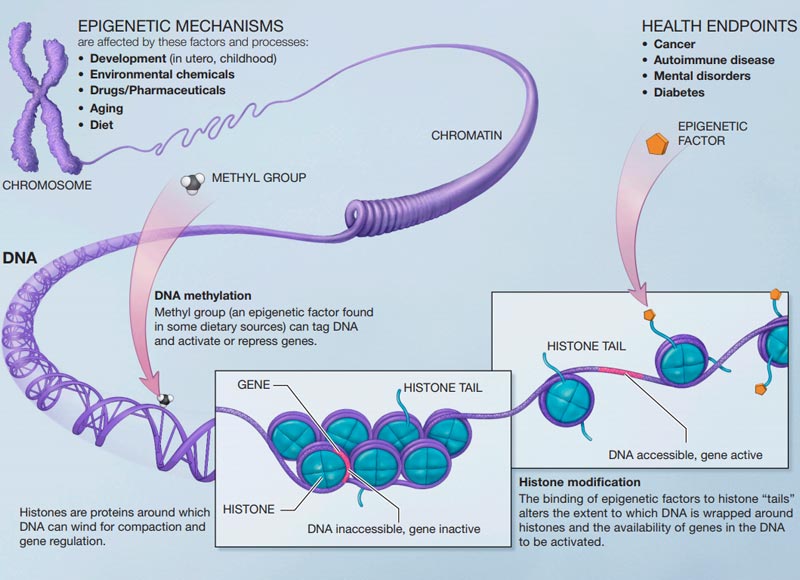 “There are at least two ways that epigenetics can be useful for drug discovery. First, the enzymes that are responsible for altering the epigenetic code can be targeted. This approach would “remodel” the chromatin and affect global gene regulation on a large scale,” says Gary S. Firestein, MD, Associate Vice Chancellor and Dean of Translational Medicine at UC San Diego Health.

“Alternatively, abnormal epigenetic marks could be used to define individual genes that are responsible for disease. Instead of targeting the epigenetics, the gene that is abnormally regulated could be the focus of drug discovery efforts.”

“Most human disorders show a loss or change in cell identity. It can be a degeneration (Alzheimer's), an immature state (neurodevelopmental disorders) or a transformation (cancer).  Thus, drugs that target the proteins involved in writing, reading or erasing these epigenetic marks are attractive targets for drug development. In the field of oncology, DNA demethylating agents and histone deacetylase inhibitors are approved for clinical use in subtypes of leukemias and lymphomas,” explains Esteller.

Earlier this year researchers from the University of California San Diego School of Medicine and the Icahn School of Medicine at Mount Sinai reported key study findings unveiling the comprehensive epigenomic characterization of fibroblast-like synoviocytes (FLS) – a key cell type implicated in rheumatoid arthritis (RA). By ‘decoding’ RA’s epigenetic landscape the team identified overlap between the cause of RA and Huntington’s disease.

“Using a novel algorithm to integrate the massive amount of data generated allowed us to determine which genes and pathways are abnormally regulated in RA. Although we found many genes related to immunity, which was not a surprise, the power of the method, was its ability to identify the unexpected pathways that could play a role. To our surprise, Huntington’s disease related genes were consistently the highest priority genes that distinguished RA. This was unanticipated and is part of the excitement of using unbiased methods.” explains Gary S. Firestein, MD, lead author of the study.

They were able to validate the role of a key protein involved in the “Huntington’s Disease Signaling” pathway indicating that the study method could be used as a means for identifying new therapeutic targets.

Firestein comments on the potential of their approach as a means for helping patients with other immune-mediated diseases: “By studying the genes that are abnormally regulated, we can find novel targets that could not have been gleaned from reading the literature. As we mine the data, we expect to find many genes that could be used for drug discovery. The platform that we developed is “disease-agnostic”; in other words, we could collect the same type of data for other diseases and identify expected and unexpected pathways that will point to new ways to develop drugs. We are already beginning to do this for other immune-mediated diseases.”

The first human disease to be linked to epigenetics was cancer – back in 1983.5,6 Interest in cancer epigenetics has since continued to increase, with specific attention being given to the broadening understanding of different epigenetic mechanisms, including hypo- and hyper-methylation, loss of imprinting, and chromatin modification.5

Esteller and his team currently work on the interactions between epigenetic modifications and non-coding RNAs and focus their efforts on the development of novel epigenetic drugs: “We are always looking for new epigenetic drugs that at the preclinical stage might be beneficial to treat human pathologies. In the past we were involved in the initial stages of implementation of the DNA demethylating agents and the histone deacetylase inhibitors and studied new compounds that act as inhibitors of sirtuins (a special type of histone deacetylase), histone kinases such as haspin, inhibitors of histone methyltransferases or blockers of histone acetylation reading (bromodomain inhibitors).”

Esteller’s team recently produced a first-in-class inhibitor of the histone deacetylase 6 (HDAC6) that among hundreds of different types of cancer cells showed a higher activity for a subtype of lymphoma called mantle cell lymphoma (MCL). Their findings were published in the journal Haematologica.

The researchers demonstrated the efficacy of the compound in cultured cells, murine studies and cells extracted from MCL patients. “It works in these models by inducing cell death (apoptosis),” says Esteller.

Esteller highlights some of the advantages of using epigenetic drugs for the treatment of cancer: “These drugs have a lower toxicity, they are not very expensive, and they have the capacity to induce differentiation of transformed cancer cells. In addition, they can be combined with other types of drugs and have the potential to enhance the effect of immunotherapy.”

However, it should be noted that there is evidence of discrepancy in the efficacy of epigenetic cancer drugs. “Solid tumors such as those associated with colorectal, lung and pancreatic cancer seem somewhat resistant to these drugs, epigenetic drugs are more effective against hematological malignancies and sarcomas.” cautions Esteller.

Due to the limited number of enzymes involved in DNA methylation, there has been hesitancy to consider them as suitable therapeutic targets – as inhibiting these enzymes would likely lead to broad and potentially serious adverse toxicological effects.7 Firestein cautions: “If we focused more on remodeling the chromatin by targeting enzymes that are responsible for creating the epigenetic marks, one concern could be potential side effects. These inhibitors could have an effect on disease-related genes as well as genes involved with normal cell function. The balance between safety and efficacy could be a very fine line.”

An alternative option may be to target the process and regulation of histone modification – as it requires a vast number of proteins with specialized roles – this individual functionality aids one’s ability to selectively target a specific protein, thereby limiting chances of toxicity.7

However, identifying the right target may not be easy, explains Firestein: “One of the key challenges is wading through the multitude of potential targets and prioritizing them. There is no shortage of abnormally regulated genes, and it would be very difficult to test them all.”

“However, a primary advantage is the unbiased nature of the research and the ability to find the unexpected…”