When you are unfortunate enough to be feeling run down, out of sorts or just have a headache, you pop a small pill and everything goes back to normal. Using existing drugs and medications seems so simple, but the process of developing new drugs is anything but. The discovery of new medicines spans a wide range of themes, from fundamental research to clinical development and translational medicine. Medicinal chemistry is an indispensable tool in this endeavor. Here we will take a deep dive into the world of modern medicinal chemistry and learn how scientists are continuously innovating to find drug candidates and get the best ones to market and into your hands.

In 2018, the US Food and Drug Administration approved 59 new drugs for a wide range of conditions.1 These are the success stories of a drug development pipeline that can roughly be split into three stages:

Target discovery and validation is the first step, where a gene, protein or even a protein-protein interaction2 with a disease-pertinent function is identified. Followed by lead compound identification and optimization. A “lead” is a compound displaying some pharmacological or biological activity towards the target, and forms the starting point for the development of the final drug. In addition, a suitable assay must be developed to screen and measure the effect of the synthesized compounds.

The development stage refers to both preclinical safety studies and clinical trials. The preclinical development might include pharmacokinetics and toxicity studies in animals, genetic toxicity studies or identification of tissue-specific biomarkers. This culminates in initiation of clinical trials in humans. There are three phases: Phase I (evaluating drug safety, dosage range and identify side effects), Phase II (evaluating efficacy) and Phase III (aim to conform the drug effectiveness and monitor side effects). If a compound completes all three stages, it then might be considered for regulatory approval.

The final stage, after the drug obtains regulatory approval as a new entity, is the life cycle management or the so-called post marketing surveillance. During post-marketing surveillance the drug is closely monitored for safety or rare and long-term adverse effects in the general population.

There are many possible sources of lead compounds and the more one can screen the higher chances of success. The compounds can be identified by screening large libraries obtained with the help of classical combinatorial chemistry3 or in silico, employing computer modeling. Here the most famous approaches are based on machine learning and deep learning.4

An alternative way is to reach out to nature, which with its abundant biodiversity is always able to provide unexpected new chemistry and biology. However, while plants and microbes readily produce these chemicals, their synthesis in the lab is difficult. The structures are simply too complex for traditional organic chemistry. That is why researchers at the University of Basel, Switzerland, generated a massive library of natural-like macrocycles and “indexed” them with the help of DNA.

Macrocycles are chemical compounds that feature a ring size of 12 or more atoms. Because the macrocycle ring structure enforces preorganization and the ability to interact with more than one binding site these compounds often show good pharmacokinetic properties. Interestingly there are currently over a 100 macrocycle-based drugs derived from natural products.5

A study published in Angewandte Chemie International Edition,6 describes a seven‐step chemical synthesis of a DNA‐encoded macrocycle library. The library was created using a strategy that incorporates ring scaffold diversity elements (building blocks including for example alkyl, aromatic or heteroaromatic moieties) in a split-pool synthesis. In this approach, which is an alternative to parallel synthesis, the library is first split, coupled with building blocks, and then pooled, washed and deprotected, followed by another round of splitting and coupling. The authors of the study managed to generate 1.4 million molecules in this way. Importantly, each compound in the library contained a covalently attached DNA tag that encoded how it was made. Thanks to this clever trick, the entire library can be screened in a single, relatively simple experiment. The authors indeed performed a screen against two protein targets human serum albumin (HSA) and α‐1‐acid glycoprotein (AGP).

“With a large diverse collection of macrocycles available for screening, a more data-rich investigation of the properties of these extraordinary molecules can begin”, said Professor Dennis Gillingham, who leads the group that produced the study. “This might reveal future medicinal applications, targets or active principles.” 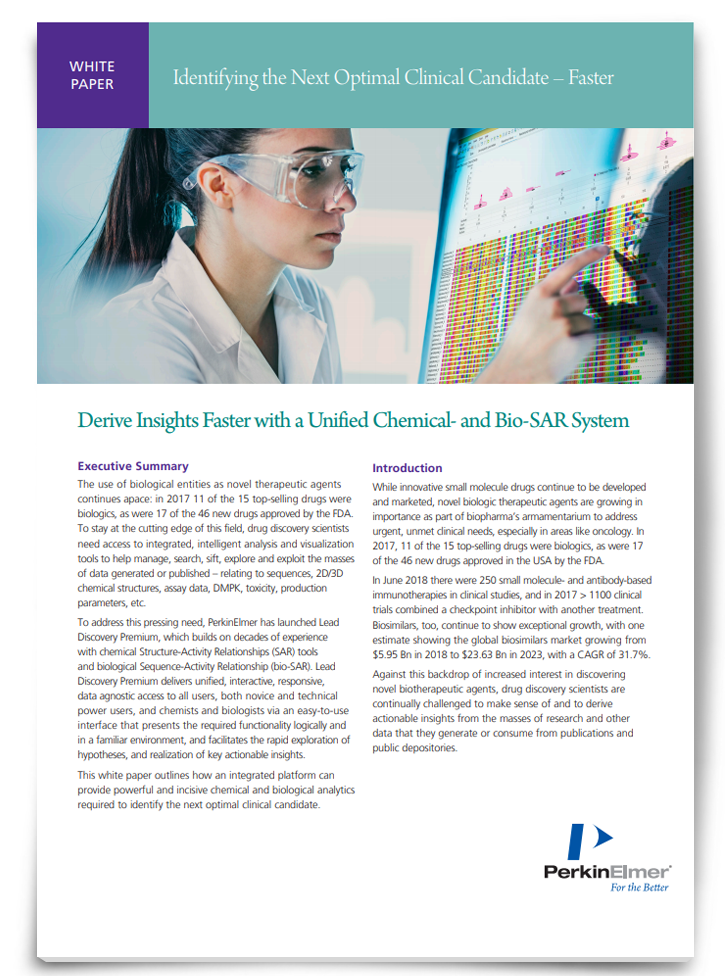 This white paper outlines how an integrated platform can provide powerful and incisive chemical and biological analytics required to identify the next optimal clinical candidate.

Download this white paper learn how to gain a deeper understanding of the structure and properties of potential new biologic and small molecule therapeutics.

From mutations to treatments

While high throughput screening is the starting point for many drugs, the brute force approach is not always necessary. Sometimes finding the right target and developing a good mechanistic understanding of the disease is the answer. This is the tale of ALK2 inhibitors.

ALK2 (activin receptor-like kinase-2) is a serine/threonine kinase and a product of gene ACVR1. The protein is part of the bone morphogenetic protein pathway as well as the transforming growth factor beta (TGFβ) signaling pathway. Scientists have found that ALK2 is implicated in a group of fatal childhood tumors known as diffuse intrinsic pontine gliomas (DIPGs). Specifically, that recurrent somatic mutation in the gene are present in about a quarter of DIPG patients.7

“DIPG is a relatively rare childhood brain cancer, but it is always deadly. Learning more about the biology of DIPG, and trying to find ways to translate that knowledge into new treatments, has been a passion of mine for years. My lab discovered that mutations in the ACVR1 gene occur in a quarter of DIPG cancers and it’s incredibly exciting to see this can now lead to potential new drugs for the disease. I can’t wait to see how they perform in patients,” said Professor Chris Jones, Professor of Pediatric Brain Tumor Biology at The Institute of Cancer Research, London.

Indeed, the discovery initially led researchers to synthetize a novel series of quinazolinone-containing inhibitors of ALK2.8 In the study published in Journal of Medicinal Chemistry, the group at The Institute of Cancer Research (ICR), London, performed systematic cross screening and structure-activity relationship (SAR) studies of quinazolinone derivatives to achieve a 40–80-fold increase in potency over the initial hit. They then obtained crystal structures of some of the compounds bound to ALK2. While one of the compounds was bound in a way consistent with previous hypotheses, another one displayed a flipped binding mode. Despite the flipped binding, these compounds still maintained their potency.

This was a starting point to form more advanced inhibitors.

A couple of years later, another study from ICR, honed in on two ALK2 inhibitors, the pyrazolo[1,5-a]pyrimidine LDN-193189 and the pyridine LDN-214117. The authors demonstrated that these compounds have beneficial effects in preclinical models of DIPG.9 An open science company M4K Pharma is now actively developing the drugs hooping to take them into clinical trials in the near future.

“This is an important study which perfectly illustrates how gaining a detailed understanding of the biology of cancers can allow us to move very quickly to the discovery of new treatments – in this case to a devastating rare type of children’s brain cancer,” said Professor Paul Workman, Chief Executive of The Institute of Cancer Research, London.

As drug discovery advances into new development paradigms, medicinal chemistry remains a key tool in the process. We now see major changes in the way high-throughput screens are carried out. For example, as highlighted here, thanks to DNA-encoded libraries. Other developments including better automation and microfluidics are also making their mark. However, despite all these technological advances, a deep understanding of the principles of molecular recognition and structural knowledge are still essential in directing drug target identification and lead optimization. These, together with genome analysis through large-scale whole-genome sequencing help accelerate the delivery of new drugs.

Complete the form below to unlock access to this Audio Article: "In the Search for New Lead Compounds – The Latest Medicinal Chemistry Impact Stories"