Protein kinases have proven to be a major drug target with over 20 kinase inhibitors approved for the treatment of cancers and inflammatory diseases in the past 20 years. The human kinome comprises 518 known protein kinases and approximately 20 lipid kinases. Nearly all aspects of cell life are controlled by reversible phosphorylation of proteins mediated by protein kinases and abnormal phosphorylation is a cause or effect of many diseases. As a consequence many pharma and biotech companies continue to undertake primary screening against kinase targets believed to be clinically important. A significant step in the optimization of a kinase lead is the determination of the comparative selectivity of those leads against other kinase enzymes. This so-called kinase profile is typically performed against a panel of kinase enzymes. This approach has facilitated the development of inhibitors with enhanced potency against the selected kinase(s) targets. In addition, it may result in the identification of possible novel selectivity against unexpected kinase targets. Up until a few years ago the typical kinase panel may have been drawn from closely-related members of the kinase super family with occasional representation from other families. However, the current trend is towards wider profiling against a more comprehensive kinase panel, in some cases utilizing all available kinases. This has led to competition among fee-for-service providers as to who can offer the broadest panel, with new kinases being added to their panel at almost weekly intervals. The ability to profile against the widest possible panel of kinases in house involves considerable expense and resources which few organizations can afford today. As a consequence outsourcing of kinase profiling is now the accepted practice, particularly if a broad kinome profile is wanted. As more pharma companies focus on the screening of related target families in parallel across therapeutic area boundaries, greater importance is being given to the early determination of selectivity profiling. This has contributed to the increasing number of companies that now offer outsourced kinase profiling on a fee-for-service basis. 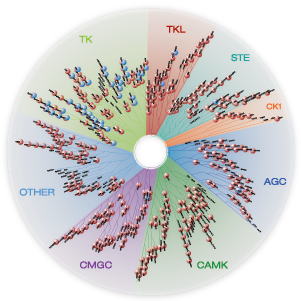 In May 2016 HTStec undertook a market survey on kinase profiling mainly among research labs in pharma, biotech and academia. The survey was initiated by HTStec as part of its tracking of life science marketplaces and to update HTStec's previous kinase profiling trends report (published May 2013). The objective was to comprehensively document current practices and preferences in kinase profiling, and to understand future user requirements, particularly with respect to the cost and use of outsourced services. The aim was to compile a reference document on kinase profiling metrics, which could be compared directly relative to HTStec’s previous 2013 report. This article contains ‘selected findings’ from the HTStec market report, Kinase Profiling Trends 2016. It is intended to provide the reader with a brief insight into recent market trends. It covers only 11 out of the 30 original questions detailed in the full report. In this ‘selected findings’ we focus our discussion exclusively on outsourced kinase profiling, although the market report on which it was based did also examine in house profiling. The full published report should be consulted to view the entire dataset, details of the breakdown of the responses for each question, its segmentation and the estimates for the future. Please click here for more information.

Around 2/3rd of all kinase profiling activities are outsourced today. The main therapeutic areas utilizing the results of these outsourced kinase profiling assays are given in Figure 1. This showed that the majority (80%) of survey respondents were using kinase assays within the oncology therapeutic area (TA). This was followed by 44% in the inflammatory disease/autoimmune TA; 26% neurology TA; 19% metabolic assays; 11% cardiovascular and anti-infective TA’s; and 9% other TA’s. 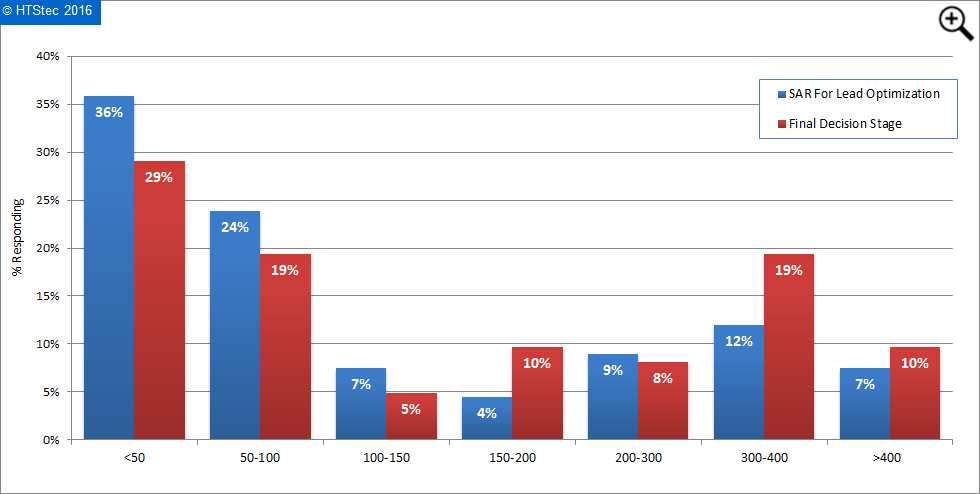 Figure 6: The Size of Kinase Profiling Panel Respondents Would Prefer An Outsourced Provider To Offer

Figure 8: When Respondents Would Choose To Do A Broad Kinome Profile

Survey respondents were asked to choose their most preferred providers of outsourced kinase panel profiling. The preferences recorded as the percentage share of all provider selections are summarised in Figure 9.  This showed that Reaction Biology was the most preferred outsourced kinase panel profiling fee-for-service provider with 31% share of the selections. This was followed by DiscoverRx (16%), Eurofins (11%) and Thermo Fisher Scientific (10%). All other vendors had 5% or less share of selections. Please Note: this a not a true market share based on actual purchasing of services, but rather a summation of the number of preferences respondents made for a particular service provider. 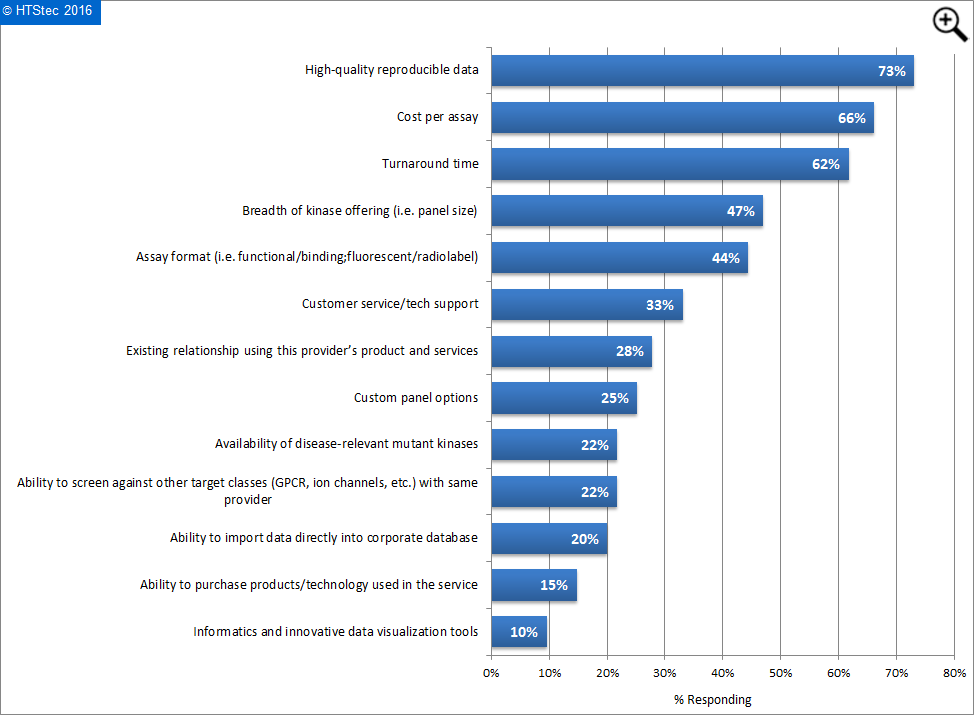 The decision-making criteria that were rated most important when selecting an outsourced kinase service provider are listed in Figure 10. This showed that high-quality reproducible data was rated most highly with 73% of survey respondents selecting. This was followed by cost per assay (66%), turnaround time (62%), breadth of kinase offering (i.e. panel size) (47%), and then assay format (i.e. functional/binding; fluorescent/radiolabel) (44%). The least important criteria when selecting an outsourced kinase service provider were ability to purchase products/technology used in the service, and informatics and innovative data visualization tools. 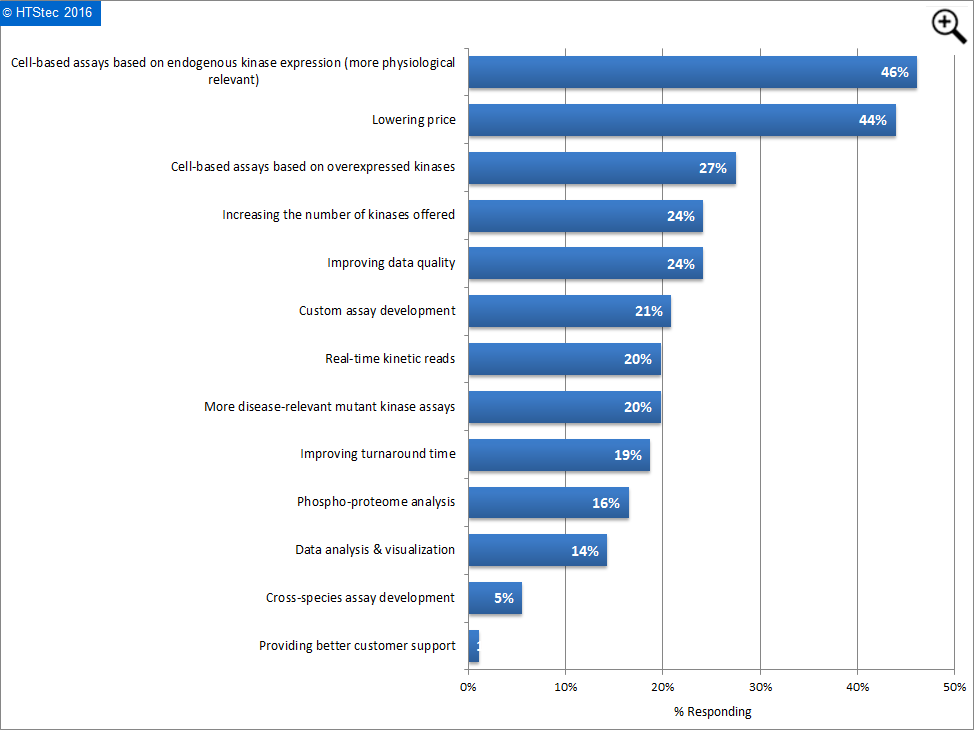 Where respondents think kinase service providers should focus their efforts going forward is detailed in Figure 11. This showed that most (46%) wanted to see cell-based assays based on endogenous kinase expression (more physiological relevant). This was followed by lowering price (44%), cell-based assays based on overexpressed kinases (27%); increasing the number of kinases offered (24%), and then improving data quality (24%). Considered least wanted were cross-species assay development and providing better customer support.

Maximizing assay representation across the entire kinome including wild type, mutant, atypical, lipid and pathogen kinases has been a major objective of nearly all fee-for-service providers over recent years. The total number of kinases available for outsourced profiling now exceeds 600 at some providers. Many providers have also greatly improved their data delivery times to only a few days in some cases. In addition, some providers are now offering novel cell-based assay formats to validate kinase inhibitors e.g. 3D tumor spheroid assays; soft agar/clonogenic assays; cell-based tyrosine kinase assays; direct quantification of specific kinase phosphorylation activity in human cells; to name a few. With a large number of providers competing for business assay services pricing has never been keener. However, customer requirements are never 100% matched and end-users can always find unmet needs, here are just some of those few reported to us: 1) greater flexibility in the ability to customize panels without costs spiralling; 2) assays to be available in the same format (there is currently  no accepted universal detection method); 3) better analysis of the kinase relationships across the entire kinome; 4) more cell-based panels at a reasonable cost; 5) consistent naming of enzyme/protein and information provided by the different suppliers; 6) a platform to evaluate inactive kinases; 7) binding kinetics data e.g. koff rates, and 8) greater clarity over the activation-state  of the kinase being profiled. Despite these shortcomings the case for outsourcing kinase profiling versus in house testing has never been better served.

Complete the form below to unlock access to this Audio Article: "Kinase Profiling Trends 2016"