Complete the form below and we will email you a PDF version of "Lab Automation Increases Repeatability, Reduces Errors in Drug Development"

The US Food and Drug Administration (FDA) approved a record number of generic drugs in July, highlighting the rapid growth in drug development. As drug prices around the world continue to rise, increased generic options challenge makers of more expensive brand-name drugs to find ways to cut the costs of drug development.

The trend of precision medicine is spreading across malignancies, targeting driver mutations to provide a tailored treatment approach. This is especially relevant in immunotherapy, as cancer remains one of the world’s top healthcare challenges, where this approach could dramatically extend expected survival rates. With an ageing and growing population, the number of cancer patients increases each year, many of whom will be waiting for and counting on the next big pharmaceutical breakthrough.

As drug developers pursue lower-cost treatments, automation will be a key factor in research and development. From initial discovery to regulatory approval, automation has the potential to boost lab efficiency while decreasing costs. New technologies are driving laboratory automation to improve efficiency, shorten time to FDA approval and reduce the number of technicians needed in the lab – driving overall development costs down. Even though the industry has a long way to go to enable clear market access, according to a report by Future Market Insights, lab automation in diagnostics and life sciences is estimated to reach $1.3 billion by the end of 2027. 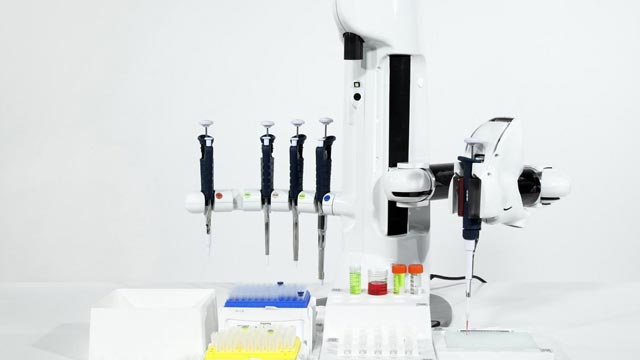 Immunotherapy is leading the charge for precision medicine at a reasonable cost. It is being assessed for multiple forms of cancer and pharmaceutical companies are striving to design more personalized combinations. Novartis just brought the first immunotherapy drug to the American market in the form of Kymriah® (tisagenlecleucel). It will still give you sticker shock – coming in around $475,000 as a single-treatment drug, but it’s significantly lower priced than others on the market and is surprisingly less expensive than anticipated. Other companies are following suit, and automation will be key to cutting down drug development costs even further.

Automation can also be applied to other areas of the life sciences industry, including genomic research. Involving the collection of large data sets resulting from multiple samples and assays, the process can be challenging and labor intensive. Moving from research questions to the data that can decisively provide answers takes time. By implementing automation in the lab, researchers can increase the number of reactions they can perform in parallel, reducing the time it takes to process samples and increasing the number of samples each researcher can process, which reduces the amount of sample-to-sample variability. Automation aids researchers in increasing lab repeatability and reproducibility in gene expression profiling, shortening the time it takes to generate results in next generation sequencing and optimizing conditions for functional genomics, ultimately producing better results.

Poor preclinical data is one of the biggest contributors to clinical test failures. The lack of reproducibility in preclinical research today is leading to more variability and uncertainty in the data produced, which means it can’t be trusted by researchers. When preclinical data has been unproven through reproducibility, it can be flawed. Unfortunately, it can be affected by any number of factors, including mis-calibrated pipettes, human error, transcription mistakes and more. It’s not uncommon for this flawed data to make its way into scientific literature and subsequently be used as the basis for clinical trials. Once the drug is in the clinical trial phase, it will eventually become clear that the preliminary test data was wrong, and the entire process will need to be scrapped. This can cost drug developers up to $1.4 billion depending on what phase the flaws are identified.

Automation tools are no longer “nice to have”, they are key for the future of drug development and pharmaceutical research. Taking modern cellular work out of the human environment and into a sterile robot sphere ensures samples avoid contamination, making the traceability, accuracy, reliability and reproducibility of data more easily achievable than ever.

Piero Zucchelli is CEO and founder of Andrew Alliance, the robotics company that is improving repeatability with an innovative approach to liquid handling, using conventional lab pipettes. As a scientist, he spent 15 years in experimental particle physics, working at Stanford and CERN among other laboratories, and later developed one of the most advanced micro-fluidics platform by founding SpinX Technologies. He received his M.Sc. and Ph.D. in Physics for work performed in Stanford University and CERN. He co-founded Andrew Alliance to improve the progress of biology, under the belief that better laboratory operations will produce better data, and better data will deliver better science.