The medicinal qualities of plants have been used to treat human diseases for thousands of years. While the exact timeframe isn’t clear, archaeological studies suggest herbal medicine was practiced 60,000 years ago. During the 21st century, “conventional” or “Western” practices dominated the medical landscape, largely owing to new capabilities in chemically synthesizing drugs.

“Despite the current preoccupation with synthetic chemistry as a vehicle to discover and manufacture drugs, the contribution of plants to disease treatment and prevention is still enormous,” writes Professor Ciddi Veeresham from the Department of Pharmacy at Kakatiya University. “Even at the dawn of the 21st century, 11% of the 252 drugs considered as basic and essential by the World Health Organization were exclusively of flowering plant origin.”

For oncology, plant-based anti-cancer drugs have proven instrumental in the fight against a disease that claims approximately 609,360 lives in the United States alone. Examples of essential plant-based anti-cancer compounds include podophyllotoxin analogs, taxanes, vinblastine and vincristine. The latter two are examples of monoterpene indole alkaloids (MIAs), derived from the Madagascar periwinkle (Catharanthus roseus). During cell proliferation, vinblastine inhibits the cell cycle by binding to microtubules, preventing the formation of the mitotic spindle. It can be used as a chemotherapy agent to treat cancers such as lymphomas, ovarian, breast, testicular and lung cancer.

While plants represent a bountiful source of novel and potentially therapeutic compounds, their abundance is finite, and environmental concerns surround their utility at large scales.

“An effective anti-cancer drug called paclitaxel [Taxol] was developed from the Pacific yew tree. However, it was based on a chemical that exists in very low yields,” says Dr. Melanie-Jayne Howes, research lead at the Royal Botanical Gardens, Kew.  “Hundreds of trees had to be cut down to develop the drug. As a result, the tree is now classified as near threatened.”

The demand also far outweighs availability. Let’s look at MIAs, for example. Vinblastine and vincristine require 500 and 2000 kg respectively of dried C. roseus leaves to synthesize 1 g of active product, which could treat approximately 10 patients. “It goes without saying that a lot of crops must be farmed when relying on low-yielding plant-based extraction of these APIs. This is problematic in its own sense,” says Dr. Michael Krogh Jensen, senior researcher at the Novo Nordisk Foundation Center for Biosustainability (DTU Biosustain).

After vinblastine and vincristine received Food and Drug Administration (FDA) approval in the early 1960s, approaches to synthesizing them using partially chemical methods were explored. In 1974, scientists successfully coupled the precursor monomers vindoline and catharanthine required to produce the biologically active vinblastine. The process, however, is not straightforward. “The complex chemistry of alkaloids primarily arises from their numerous stereocenters and reactive side groups. This makes total synthesis, or even semi-synthesis, particularly challenging when needing to obtain regio- and enantio-selective molecules,” says Jensen.

Ultimately, the current pipeline for these anti-cancer drugs is costly, both from an environmental and financial perspective. Jensen explains further: “The extraction of minute amounts of vinca alkaloids from plants uses harsh chemistries. When it comes to the socioeconomic aspects, it must be noted that even though governments and the World Health Organization take measures to regulate the price of these essential medicines, the fact is that many of them are not evenly distributed globally. Many countries cannot subsidize their usage in the clinic.”

The FDA included vinblastine and vincristine on its “drugs with shortages” list for 2019–2020.

These issues extend beyond the vinca alkaloids. “Like MIAs, taxanes display complex structures that make bulk chemical synthesis impossible in a cost-effective manner,” writes Dr. Vincent Courdavault, group leader in alkaloid biosynthesis at the University of Tours, in a 2020 review of the field. For many decades now, scientists in the field have considered whether alternate production systems could be utilized for the biosynthesis of vinca alkaloids and other anti-cancer drugs, such as microbial synthesis.

In 2015, this became Jensen and colleagues’ focus, looking specifically at MIAs. Their refactoring into another production system would require a comprehensive understanding of how C. roseus produces the natural compounds in the first place. What enzymes are necessary? What genes encode these enzymes? 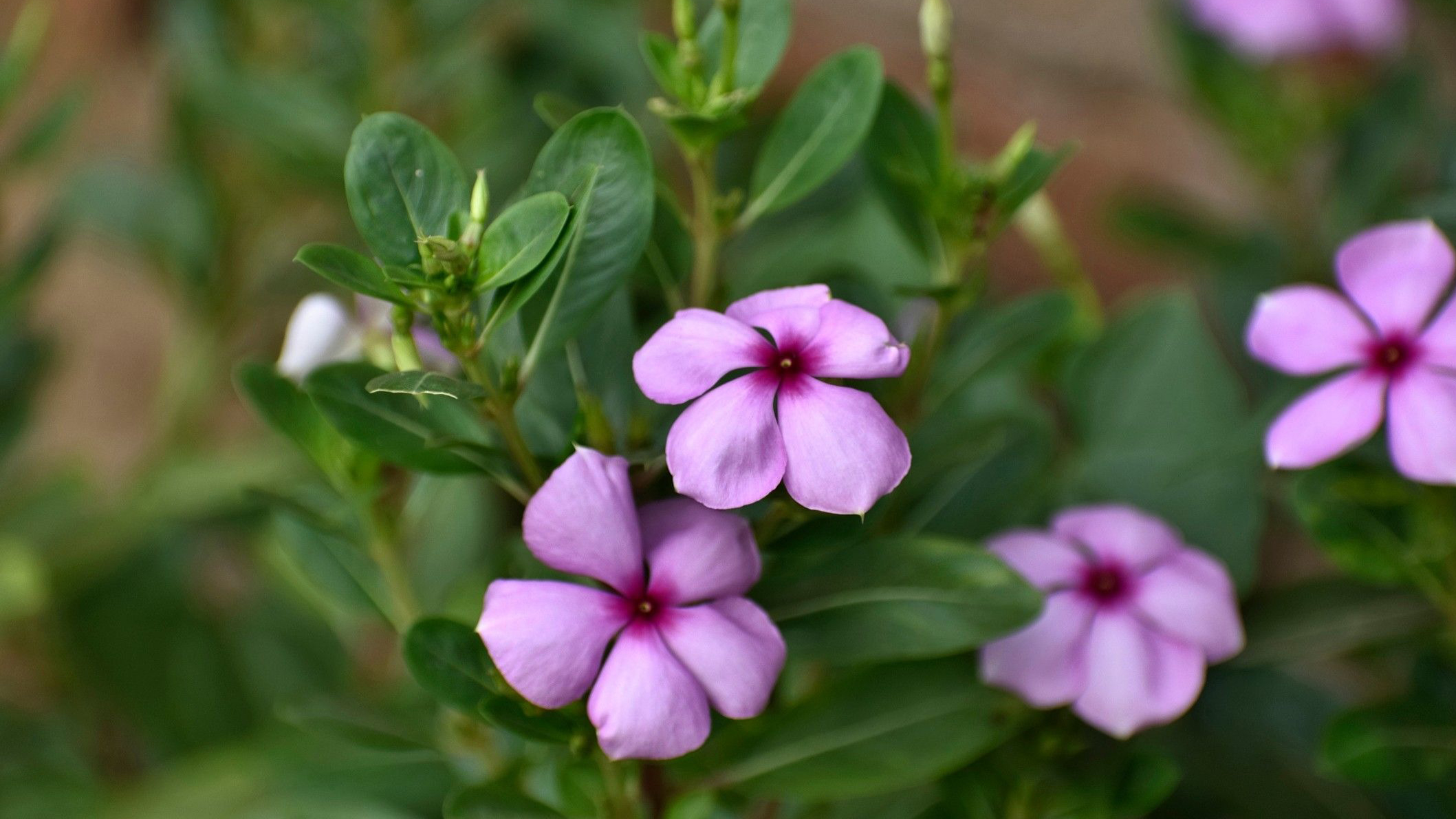 In 2018, this information became available. A paper published in Science outlined the entire biosynthetic pathway for vinblastine, including the discovery of two “missing” enzymes. Equipped with the knowledge of how C. roseus produces the drug, researchers next considered which “host” could be genetically engineered to express this pathway.

Jensen and colleagues – including Courdavault – turned to Saccharomyces cerevisiae, also known as brewer’s yeast. “When it comes to small molecule manufacturing, yeast excels for numerous reasons. Firstly, it is a biotechnology work-horse able to sustain high pressures, long fermentation processes and low pH. All sought-for traits for scalable fermentation-based manufacturing,” Jensen says. “As for complex small molecules like alkaloids, flavonoids and larger classes of terpenoids, yeast is sought for due to its high membrane capacity for an important class of membrane-anchored enzymes called P450.”

Yeast as a “cell factory”

Yeast has many cellular components, such as the nucleus, mitochondria and peroxisomes, which can be useful for compartmentalizing enzyme reactions needed for coupling molecules or mitigating toxic intermediate build-ups.

Professor Jay Keasling, a senior faculty scientist at Lawrence Berkeley National Laboratory and scientific director at DTU Biosustain, had previously succeeded in engineering yeast to produce other plant-derived compounds, including cannabinoids. Jensen, Keasling and Courdavault, among other colleagues, set out to refactor the vinblastine pathway into the microbial “cell factory”. It wouldn’t be an easy feat – the pathway is 31 steps in length, and Jensen emphasizes that multi-disciplinary scientists were needed, including expertise in chemistry, data science, bioengineering and fermentation.

Their approach utilized genome engineering technologies such as CRISPR-Cas9, which enables precise cuts to be made in the genome for the insertion or removal of genes. The researchers set their sights on achieving the synthesis of intermediate molecules, including strictosidine – a foundational molecule for the production of all MIAs. “In our study, we built different modules of the pathway and optimized each of these individually before combining to get to the final best-performing vindoline and catharanthine production strain,” says Jensen.

In total, it took 56 gene edits, including the insertion of 34 plant genes, deletions, knock-down and overexpression of wild-type yeast genes – to achieve successful production of vindoline and catharanthine in yeast. If you’re thinking – well, those are the precursor molecules, right? You’re correct. The researchers note that biosynthesis in yeast “mirrors” that of plant-based production processes, whereby vindoline and catharanthine are coupled after they have been purified from the C. roseus leaves.

Will microbes offer a novel supply chain for future anti-cancer drugs? It’s early days, the researchers emphasize. The quantities achieved by this pathway (10 ug/L of vindoline and 100 ug/L of catharanthine per L of cultivation) are not yet competitive with industry standards, but it’s a huge feat – the paper marks the largest biosynthetic pathway to be refactored into a microbial cell factory.

“The pathway could also be augmented to produce new-to-nature MIAs, which may have improved pharmacological properties such as higher efficacy or fewer side effects,” says Dr. Jie Zhang, senior researcher at DTU Biosustain, and lead author of the work. “This will potentially enable us to explore the almost infinite chemical space with many new bioactivities,” he concludes.

Complete the form below to unlock access to this Audio Article: "Making Cancer Medicines With Microbes"