Organs-on-Chips: Applications, Challenges, and the Future

Anna is a science writer at Technology Networks. She holds a first-class honours degree in biological sciences from the University of East Anglia, before joining Technology Networks she helped organize scientific conferences.
Learn about our editorial policies
EVATAR - A female reproductive tract on a chip. Credit: Northwestern Medicine

Complete the form below and we will email you a PDF version of "Organs-on-Chips: Applications, Challenges, and the Future"

Read time:
Limitations of current planar, static cell culture systems or animal models result in the high drug failure rates seen in clinical trials, a limitation that can cost pharmaceutical companies billions of dollars. In addition, many human diseases are still unable to be accurately modelled in vitro, limiting understanding and therapy development. These issues highlight the urgent need for more physiologically relevant models of human organs, and have fuelled the development of organs-on-chips.
As Geraldine Hamilton describes, organs-on-chips are functional microchips housing living cells, built using techniques from the computer chip manufacturing industry, which can mimic processes in the body such as peristalsis, breathing, and infection.

The promise of organs-on-chips

Currently a niche market of no more than $7.5M in 2016, the organ-on-a-chip field is estimated to see rapid growth reaching $60-$117M by 2022 (2017 edition - Yole Développement). Perhaps the most promising application of these models is the role they could play in drug discovery and development.

To enable the development of this area, NCATS’ Tissue Chip for Drug Screening Initiative  launched in 2012 and aims to improve the drug discovery process by developing human tissue chips that provide more accurate representations of human organs. The hope is that these models will lead to more accurate detection of toxicity or efficacy problems and reduce the amount of drugs failing in human clinical trials.

As part of this initiative, a team of scientists from Northwestern University have recently developed EVATAR, a 3D organ-on-chip model of the female reproductive tract, which can mimic a normal 28-day hormone cycle. Made up of an ovary, fallopian tube, uterus, cervix and liver, EVATAR provides a platform for studying the effects of drugs and learning more about diseases such as endometriosis and cervical cancer. It is hoped that the palm-sized model could help to advance women’s health and fertility.

As well as enabling researchers to study the effects of drugs on females, EVATAR could play a role in the future of personalised cancer treatment.

“We can study human tumours in such a system as EVATAR, outside of the woman’s body, treat them long term with hormones and/or drugs and measure specific endpoints.  This system could be used to predict how tumours will respond to specific treatments and identify biomarkers as well that could benefit how women are treated in a more personalised manner” explains Dr J. Julie Kim, Susy Y. Hung Associate Professor of Obstetrics and Gynecology, Northwestern University.

EVATAR is just one example of the huge impact that organs-on-chips could have on the future of drug discovery, disease research and personalised healthcare. Over the last few years, the Wyss Institute has played a pivotal role in the development of a range of other organ models, including an airway-on-a-chip to study chronic diseases of the lung, and bone-marrow-on-a-chip to manufacture blood cells.

The challenges of creating organs-on-chips

Despite the great promise, creating an organ-on-a-chip system is not a simple process, with a number of obstacles to be overcome. “Challenges include reproducing the architectural complexity of the human tissues and organs in vitro in a miniaturised fashion, and how to link them in the right format (arrangement) that the interconnected systems also recapitulate the human tissue/organ interactions,” explains Dr Yu Shrike Zhang, Instructor of Medicine and Associate Bioengineer, Harvard Medical School.

Dr Zhang and a team of scientists from Brigham and Women’s Hospital are working hard to overcome this challenge with the development of a modular platform which allows easy rearrangement of different organ modules through a central fluidic controlling breadboard system. This offers the potential to expand the use of organ-on-chips in a range of applications, including drug screening and toxicity studies. 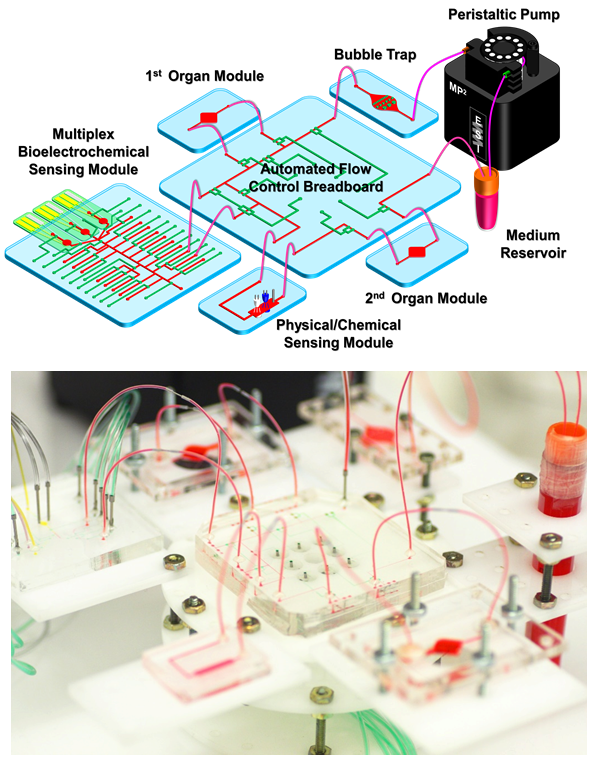 Further obstacles are faced when trying to characterise the behaviours of the organs-on-chips platforms, “especially when real-time, repeated measurements are needed -- e.g. in the case of monitoring chronic drug effects,” says Dr Zhang.

In recently published work, full sensor integration into an organ-on-a-chip system has been demonstrated for the first time. “We were able to build optical (mini-microscopy), physical (pH, oxygen, temperature), and biochemical (soluble biomarkers) sensors into microfluidics to be able to perform automated, in situ, on-line, and continual measurement of a variety of parameters that would otherwise be impossible to monitor with conventional standalone organs on chips systems,” describes Dr Zhang.

These innovations could greatly improve the ability to monitor long term responses of organ-on-a-chip models of disease and drug effects.

As well as challenges of creating and using organs-on-chips, problems can also occur with their adoption, with validation seen by many as one of the biggest hurdles. Expert Pharmaco-Toxicologist, Clinical Trials Unit, MHRA, Dr David Jones describes how “Given the enormous potential these models hold, Regulators like myself believe that it is vital that we work alongside investigators and industry in the development and validation processes because this presents a new challenge to Regulators and Industry alike.” It is hoped that these collaborative efforts will help to ease the widespread adoption of these models.

With continued developments, they could also hold the key to reducing the use of animals in pharmacodynamic and pharmacokinetic investigations, as well as toxicology studies. “There will one day, I believe, be a critical role for organ-on-chip models to improve the prediction of organ toxicity liabilities, to support mechanistic understanding via biomarker investigation in a more physiologically relevant test system, and to provide a basis for comparative toxicology between non-clinical test species and the patients,” says Dr David Jones.

So, will this eventually remove the need for animal models entirely?

“Given the complexities of organ function and regulatory requirements, it is unlikely that organ-on-chip models will replace the current animal based pivotal safety assessment testing paradigm anytime soon. Data from them can, however, inform and add to information gained from these pivotal safety studies, especially in investigating unexpected effects seen either in animals or in the clinic,” explains Dr. David Jones.

Despite this continued need for animal models, it seems that greater adoption of organ-on-chip models over time could lead to a parallel decrease in the amount of animal-based assays in a number of applications.

In ongoing efforts to fuel future developments in organ-on-a-chip technologies, the next phase of NCATS’ Tissue Chip for Drug Screening Program was announced at the end of 2016, with funding of $13.5 million being provided for the Tissue Chips for Disease Modelling and Efficacy Testing initiative. This will enable the further creation of physiologically relevant models of human diseases using tissue chip technology. The ultimate aim is to create an integrated human-on-a-chip, which could revolutionise the drug discovery and personalised medicine fields.

Complete the form below to unlock access to this Audio Article: "Organs-on-Chips: Applications, Challenges, and the Future"