Ion channels play a key role in regulating electrical activity in excitable cells, and many additional roles in non-excitable tissues. They are important therapeutic targets in a range of indications including arrhythmia, hypertension, local anaesthesia, pain, stroke, epilepsy, depression, bipolar disorder, COPD, autoimmune disorders and diabetes. Not only are ion channels major drug targets, but they are also important indicators for drug safety. Indeed, many drugs withdrawn from the market due to cardiac related adverse effects have been shown to block the human ether-a-go-go (hERG) ion channel, which delays repolarization of the cardiac action potential and can result in a potentially fatal arrhythmia known as Torsades de Pointes (TdP).

Most service providers that offer selectivity profiling have a large collection of stably transfected ion channel cell lines from which they assemble channel panels. Many service providers have also adapted and validated these cell lines for use on HT APC systems, some also sell their cell lines commercially. Providers of outsourced ion channel testing fall into 2 categories: 1) specialty CROs (i.e. providers with offerings limited to ion channel screening or ADME or animal models or clinical studies or any combination of these activities, but NOT the entire value chain); and 2) single-source or integrated CRO (i.e. a one-stop shop offering all activities).

In July 2016, HTStec undertook a market survey on outsourced ion channel testing mainly among research labs in pharma, biotech and academia. The survey was initiated by HTStec as part of its tracking of life science marketplaces and to update their previous outsourced ion channel testing trends report (published May 2013). The main objectives were to comprehensively document current use of and potential interest in outsourcing ion channel primary screening, selectivity profiling and safety liability testing. The survey also investigated access to stably transfected cell lines and future purchasing plans. The aim was to compile a reference document on outsourced ion channel testing, which could be directly compared with HTStec’s previous 2013 report. This article contains selected findings from the HTStec market report, ‘Outsourced Ion Channel Testing Trends 2016’.

It is intended to provide the reader with a brief insight into recent market trends. It covers only 11 out of the 32 original questions detailed in the full report. The full published report should be consulted to view the entire dataset, details of the breakdown of the responses for each question, its segmentation and the estimates for the future.

The stage in the drug discovery process where survey respondents most want outsourced selectivity profiling is shown in Figure 3. This showed that most (24%) respondents want to outsource selectivity profiling after hits-to-leads (lead optimization). This was followed by either: after secondary/counter screening or after primary screening/HTS (both 15%); ‘after some initial selectivity profiling results generated in- house’ (14%); ‘no fixed stage, we want to profile lead compounds from other therapeutic areas’ (12%); and then, ‘when about to start IND enabling’ (3%). 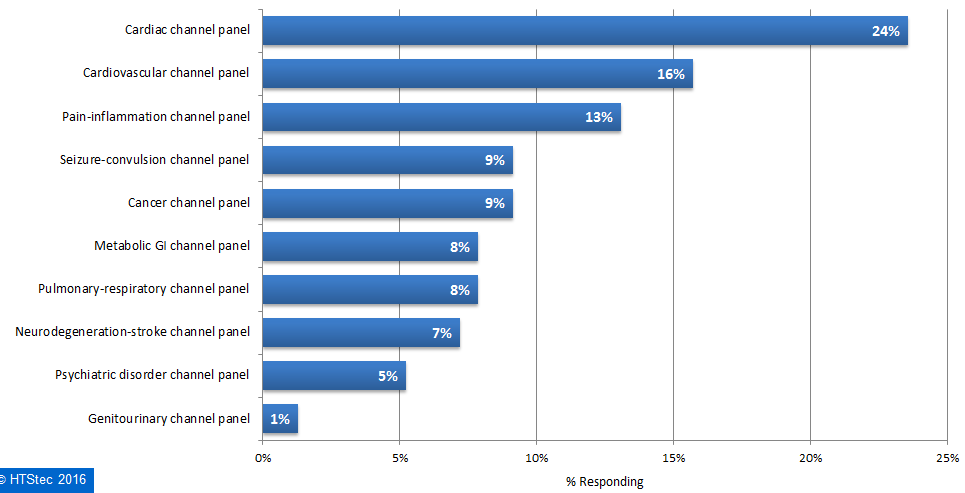 What motivates the selection of a fee-for-service ion channel selectivity profiling provider is detailed in Figure 6. This showed that survey respondents rated data quality (e.g. Giga ohm versus Mega ohm seal data) as the greatest motivation in selecting an ion channel selectivity profiling provider. This was very closely followed by price, assay platform used and then turnaround times. Rated as of least influence, was ‘provider offers downstream services’. 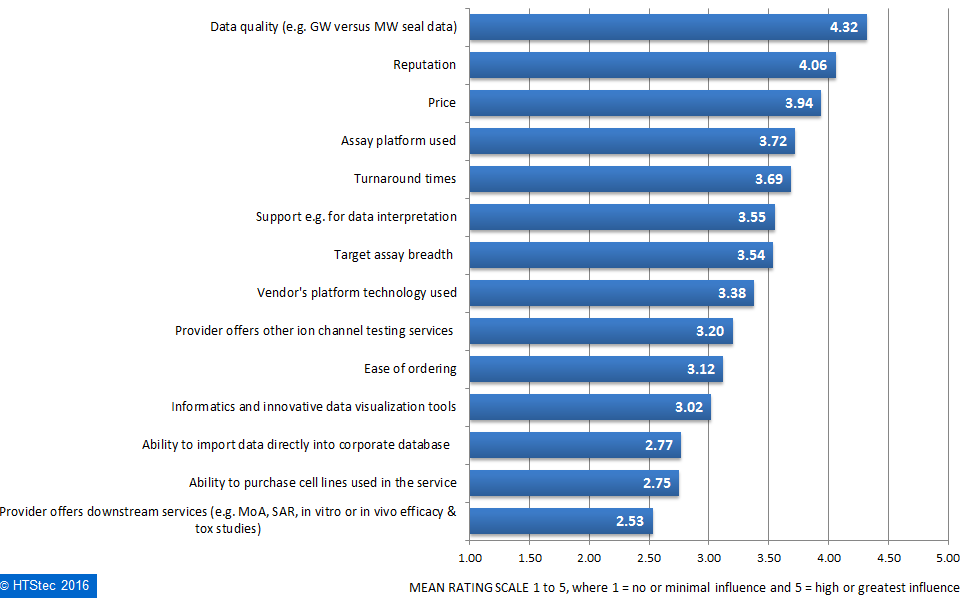 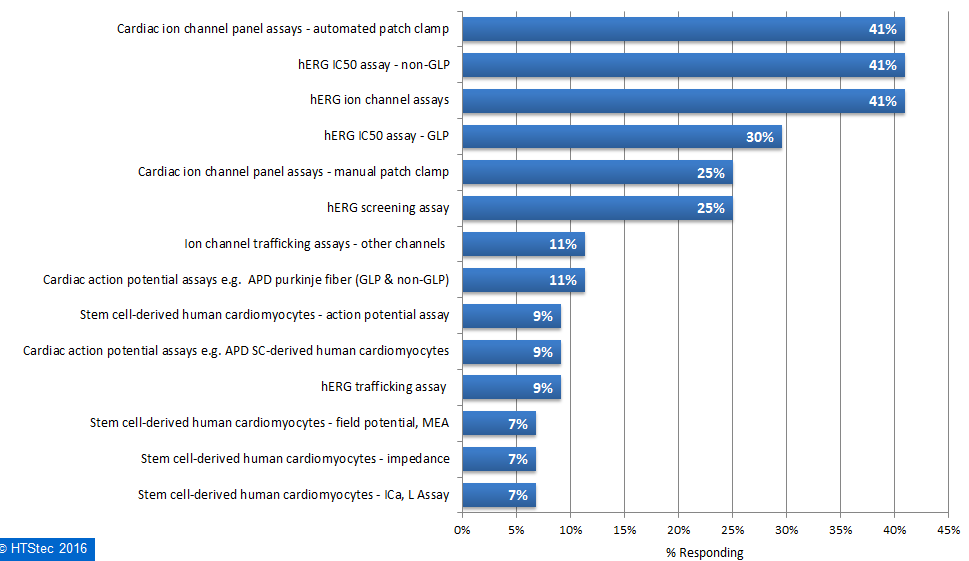 The most used fee-for-service providers of ion channel testing services are reported in Figure 10. This showed that Eurofins (33%) was the most used fee-for-service provider of ion channel testing. It was very closely followed by Charles River (30%) and then more distantly by Thermo Fisher Scientific (9%), Aviva Biosciences (4%), SB Drug Discover (4%)y and Wuxi Pharmatech (4%). All other providers (totaling 17%) each had less than 4% share of use. This provider selection should not be confused as a true market share, it is not based on the actual $ value of services purchased, but on which provider survey respondents indicated they have most used over the past 12 months.

The importance (influence on provider selection) of an ion channel testing fee-for-service provider offering specific services is detailed in Figure 11. This showed the survey respondents rated most highly ‘access to selectivity profiling (ion channels only)’ as the offering an ion channel service provider must provide to be worthy of consideration. This was followed by selectivity profiling (ion channels, GPCRs & kinases); and then assays fulfilling CiPA recommendations and GLP safety liability testing. Rated least wanted (not needed) was med chem around lead series (Figure 10). 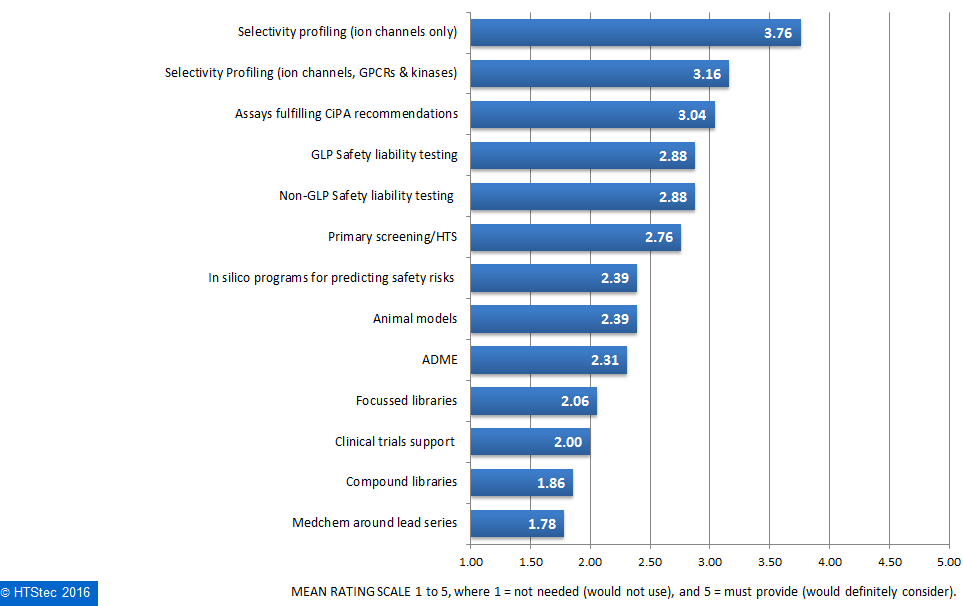 Overall the use of outsourced ion channels testing services, particularly for selectivity profiling, is the preferred option for many drug discovery groups. However, the implementation of the CiPA initiative is expected to change the focus in nonclinical cardiac safety assessment by replacing the early hERG assessment (non-GLP) with an evaluation of compounds against multiple cardiac currents (APC); in silico modeling of cardiac action potentials; and the use of stem cell-derived human cardiomyocyte assays (e.g. MEA), as a multicellular test system that recapitulates the physiological properties of the human heart (e.g. with ECG-like field potentials). CiPA does however not displace GLP hERG or GLP in vivo ECG in a large animal which will still be needed for IND enabling, and are key services available at CROs. It will be interesting to see how outsourced providers of in channel testing services adapt to the changing regulatory requirements and the emergence of new in vitro screening technologies and approaches over the coming years.

Complete the form below to unlock access to this Audio Article: "Outsourced Ion Channel Testing Trends "