The 3D Structure of Telomerase: Uncovering Its Role in Human Disease

The 3D Structure of Telomerase: Uncovering Its Role in Human Disease

Complete the form below and we will email you a PDF version of "The 3D Structure of Telomerase: Uncovering Its Role in Human Disease"

Researchers have published the first detailed picture and description of the 3-dimensional molecular structure of telomerase – a discovery that could enable better targeted drug screening and could result in more successful telomerase-related clinical therapeutics.

What does telomerase do?

The telomerase enzyme is a eukaryotic ribonucleoprotein (RNP) that repeatedly synthesizes and adds short species-dependent repeats to the 3’ end of telomeres, combating the loss of telomeres during genome replication.1,2
Telomerase was initially discovered in the unicellular eukaryote Tetrahymena thermophila in 1985 by Carol Greider and Elizabeth Blackburn3 – 12 years later it was discovered in humans. Telomerase has been found to be absent in the majority of ‘normal’ somatic cells in humans. However, its presence in over 90% of cancerous cells has ignited efforts to design drugs to target it.

Telomerase is known to be involved in several human diseases, including cancer, with abnormal activation of the enzyme triggering tumorigenesis. Interestingly, this enzyme is also known to be implicated in aging – a major cause of which is hypothesized to be due to the depletion of telomeres. Although there have been strong research efforts to determine ways to manipulate this enzyme – to determine ways to therapeutically combat these conditions – until now, progress has been hindered due to a lack of structural information.

Uncovering the 3D structure of telomerase

In a recent press release, first author Thi Hoang Duong “Kelly” Nguyen commented: “The best previous images of human telomerase had a resolution of only 30 Ångstroms; we were able to get about 7 to 8 Ångstroms resolution using cryoelectron microscopy,”

“When I got to the point where I could see all the subunits – we had 11 protein subunits in total – it was a moment of, ‘Wow, wow, this is how they all fit together.’” 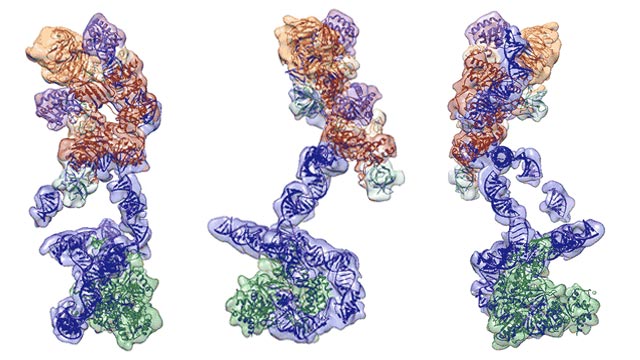 Multiple views of the telomerase structure, showing RNA backbone in blue, associated proteins in orange and red, and the heart of the enzyme, a reverse transcriptase, in green. Credit: Kelly Nguyen graphic

By optimizing telomerase purification techniques and by using cryo-EM the scientists were able to observe the telomerase structure at subnanometre-resolution, “showing the catalytic core with telomerase reverse transcriptase (TERT) and conserved motifs of telomerase RNA (hTR), and an H/ACA ribonucleoprotein (RNP).”

At this resolution the team were then able to "fit available high-resolution structures and homology models of all components". This combination of methods revealed the detailed organization of human telomerase RNA (hTR) and 10 protein subunits comprising the enzyme, providing a ‘clearer picture’ of hTR motif functions and the mutations causing telomerase deficiency.1

Senior author of the 2018 paper Professor Kathleen Collins first published evidence of telomerase’s importance in humans in a Nature paper back in 1999. In their original paper, Collins and colleagues reported the first known human disease caused by a mutation in telomerase, more specifically a mutation of the protein dyskerin, which results in dyskeratosis congenita. People with this condition have defects in highly regenerative tissues (e.g. skin and bone) as well as having chromosomal instability and a predisposition to develop specific types of malignancy.4

Now, with more detailed insights in to the structure of telomerase, the researchers finally have a greater understanding of why genetic mutations in some of the telomerase proteins lead to dyskeratosis congenita. Mutations prevent linkages between dyskerin molecules, preventing the molecules from associating with other protein networks, as well as stopping adequate linking to the RNA backbone of the enzyme.

Kathleen Collins explained how it felt when they finally discovered the exact link between dyskeratosis congenita and telomerase: “This was THE best highlight for me. The figure panel of the dyskerin mutation hotspot mapped onto the structure is frozen – in delight – into my memory from the moment that the first author, Kelly Nguyen, first showed it to me. Just this morning I was relating this to the clinician who mapped dyskerin and its mutation hotspot as the basis of dyskeratosis congenita (Inderjeet Dokal) just a few months before my lab came across it as a telomerase subunit.

She continued: “It had been proposed by others that those mutations weaken dyskerin binding to chaperone SHQ1, but since there aren’t SHQ1 mutations in patients, the explanation wasn’t satisfying. Previous students in the lab had worked hard to understand the biochemical mechanism(s) of disease, so I’m thrilled that their work combined with the structure explains why telomerase RNP is particularly susceptible to the disease mutations.”

Dr. Eva Nogales, co-corresponding author of the 2018 Nature paper shared further details about next steps and outlined the team’s future research focus: “There are at least two important directions for us in the next year. One obvious direction is to pursue true atomic resolution This effort will include pushing the contrast in the images we obtain with our electron microscope, so that the computational analysis that aligns the images of many telomerase molecules into a single 3-dimensional structure can be more accurate and thus lead to higher resolution.

Nogales highlighted that the number of images will still need to be increased tenfold or more – the team’s computational analysis will have to become even more innovative and sophisticated.

“Atomic resolution will be essential to define regions that are specific to the human complex and not present in the atomic structures from pieces of non-human components that right we have so far used for the interpretation of our density map. That step forward will allow us to build the atomic resolution details of subunit interaction interfaces and the active site that are unique to humans and thus the best target for drug design.”

Collins commented on the impact of the publication the drug discovery field: “We hope that this structure encourages screening for small molecule inhibitors by using its revelations about what subunit interactions limit telomerase function in cells (the DC disease mutations for example).

“Also, having a homogeneous telomerase sample preparation method offers the opportunity for activity-based small molecule screening. Most of all I think it has the influence of removing a bottleneck to our hopes that telomerase can be tamed, which is an inspiration for the research community.”