Complete the form below to unlock access to this Audio Article: "The Changing Landscape of Target-Based Drug Discovery"

Target-based drug discovery has long been favored by the pharmaceutical industry for its systematic and rational approach to drug design. However, despite producing an extensive arsenal of treatments over the years, the cost of bringing a new drug to market continues to skyrocket.

In this article, we discuss the cost of developing a drug, what makes a good drug target, the challenges and benefits of target-based drug discovery and how target-based approaches compare to phenotypic led approaches. We also explore the new and innovative technologies that are helping to improve early-stage targeted drug discovery, including the highly anticipated field of artificial intelligence. Finally, we consider the importance of targeted drug discovery in response to the ongoing COVID-19 pandemic and how these approaches can help us better prepare for future global health crises.

It’s no secret that bringing a new drug to market is prohibitively expensive and time-consuming. Some estimates put the cost of a new drug at $2.6 billion, and the duration from concept to market between 12–15 years.1 “It is clearly unacceptable that we spend that much money on developing one drug… We are an inefficient industry and we have to get drugs to market for less money,” says Dr Richard Angell, head of the translational drug discovery group at University College London.

Indeed, the failure rate of drug discovery is high. A staggering 9 out of 10 drugs fail at the clinical stage of development, and many drugs never make it to clinical trials in the first place.2

According to Angell the main challenge the industry faces is picking good drug targets in the first place: “The one thing you can’t change in a drug discovery project is the target. Once you launch your project you can change the chemistry, or the assays but the target is fixed… So, it’s worthwhile spending a lot of time making sure you identify a good target early on.”

What makes a good drug target?

A key challenge faced when identifying good targets is being able to identify and amalgamate valuable information from lots of different sources. Ideally, you want to have a good set of clinical indications and scientific data from human pathology, genome association studies, as well as overexpression and/or knockout studies to support a particular target in a disease. Angell explains that “you have to make sure that the disease-specific target is actually druggable – can it be modulated by a small molecule?”

Other indicators of a good target include its novelty as well as a pre-existing knowledge of its safety. “Is safe modulation of the target possible? Overactivation or inhibition could worsen the disease or produce symptoms that are worse than the disease itself… We also look at clinical trials associated with the mechanism of action – are they going well? Have any dropped out? Can we learn why these trials may have stopped, or can we learn anything about the validity of this target,” says Angell.

Furthermore, Angell highlights that structural information about the target is often highly desirable: “It’s really nice when we can understand the 3D structure of the protein that we’re targeting and try and use that information to design a better compound more quickly.”

“We also think quite hard about how you would test the compound in the clinic... We look for measurable biomarkers associated with the target… the best scenario is that you can test it with a simple blood test.”

Having a solid collaborative network of clinicians, academics and industrial partners is also extremely important. “One of the nice things about doing drug discovery in a university setting is that you can work with some of the best scientific experts in the field and link into the wider collaborative network very easily,” explains Angell. 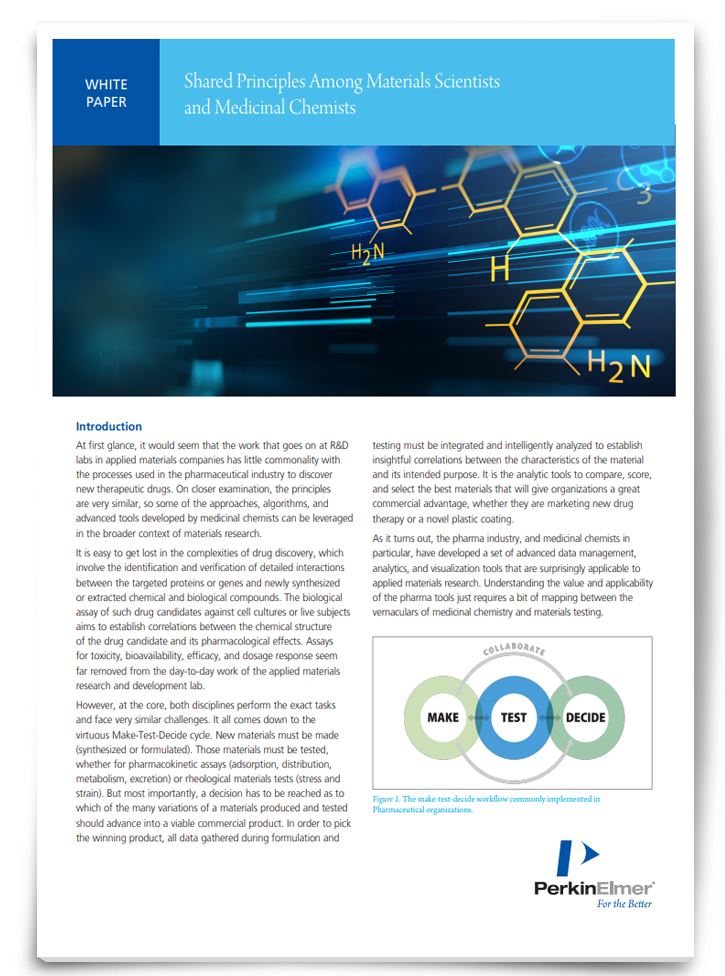 At first glance, it may seem that the work that goes on at research and development labs in applied materials companies has little in common with the drug discovery processes used in the pharmaceutical industry. Upon closer inspection, it becomes clear that the principles are, in fact, very similar. Both disciplines face similar challenges, whilst some of the approaches, algorithms, and advanced tools, developed by medicinal chemists can be also applicable to materials research. In this whitepaper, discover the shared principles among material scientists and medicinal chemists.

Target-based vs phenotypic based drug discovery

Richard argues that “target-based drug discovery has an advantage as it allows you to separate out the problems and target them individually. For instance, if the problem is that a drug can’t get into the cell then you can identify that quite quickly and try to fix it, or if it isn’t the right shape to engage with the biological target then you can model the 3D chemical structure and try and address the problem. The challenge with phenotypic approaches is that you’re trying to carry out a multiparameter optimization in a single assay which can be quite difficult to interpret... having said that both approaches definitely feed off each other and are very much worthwhile.”

The future of target-based drug discovery – AI and beyond

In the last few years, there has been a lot of interest in using artificial intelligence (AI) to try and improve early-stage drug discovery and reduce the costs of bringing new drugs to market.4 Recently, several large investments have been made into a number of new AI-driven biotech companies.5 The majority of these companies employ AI to help make sense of the vast scientific literature and ever-growing patient genomic, proteomic and transcriptomic datasets – synthesizing this information to generate novel drug targets. A recent example of this was a collaboration between Imperial College London and Benevolent AI to rapidly identify repositionable drugs to help treat COVID-19.6

Professor Ross King, an expert in machine learning and artificial intelligence at Chalmers University of Technology, Sweden says that “In 10–15 years the process of drug design will be almost fully automated, from target selection, to screening, to [quantitative structure activity relationship] QSAR learning, to new compound synthesis. This will happen because machines are much better at making these types of decisions than humans, and because the resulting process will be much faster and cost effective.”

King is widely known for his work developing the robot scientists “Adam & Eve” – a demonstration of how early-stage drug discovery can be automated using high throughput robotics and AI.7 “With Eve we automated early-stage drug design. Eve could automatically run compounds through its synthetic biology assays. When enough hit compounds were found, Eve then stopped testing compounds from the library, and ran more informative assays on the hit compounds. Eve used “active” machine learning to select new compounds from its library that were designed to optimally improve the statistical models… We proved that this approach to drug screening is generally more cost effective than testing the whole library.”

Angell is open minded about the use of AI for drug discovery but remains to be fully convinced. “There is no magic bullet,” he says, but agrees that “having automated methods of synthesizing the vast scientific literature has to have its advantages… the drug discovery industry needs something like this… but in the end biology is king.”

A new target-based technique that Angell thinks could be a real game-changer is called PROteolysis TArgering Chimeras or “PROTACs”.  This approach focuses on designing small molecules that can bind to your target of interest and also to the E3 ligase so that the target is dragged and tagged for degradation.8 Work is also underway to determine whether PROTACs can be even more precisely targeted using photopharmacology. “It’s a really smart way of regulating target expression using a small molecule… This would not even have been considered possible 10 years ago.” PROTACs are now beginning to enter the clinical stage of development. 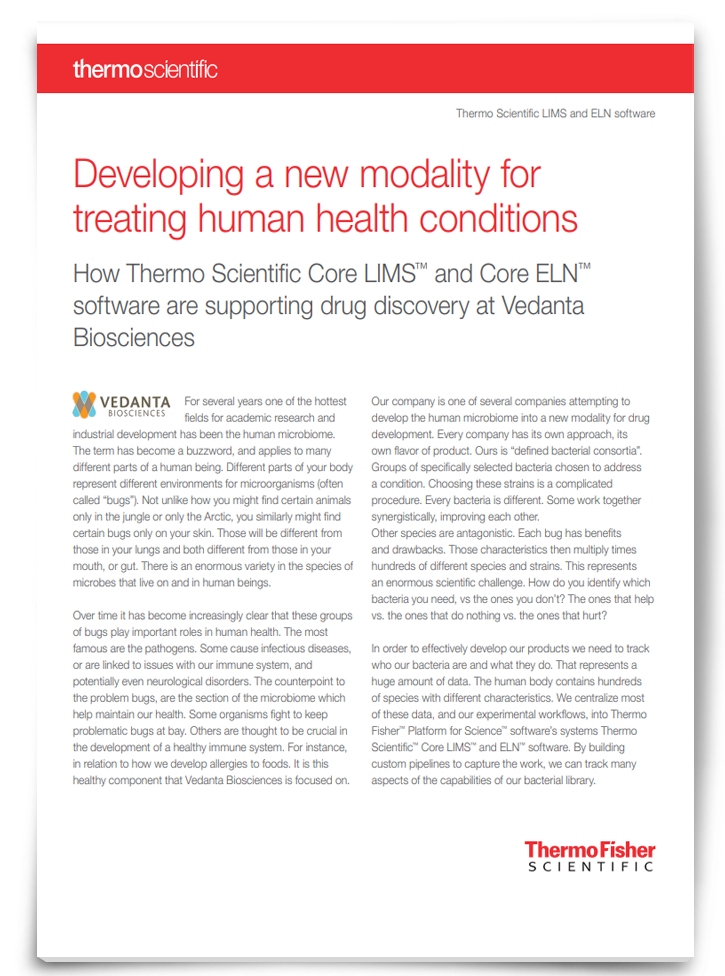 For several years one of the hottest fields for academic research and industrial development has been the human microbiome. The microbes comprising an individual’s microbiome can be pathogenic or live in symbiosis with the human body. Due to the sheer masses of bacteria found on and inside of the body and the amount of research needed to study them, adequate software must be applied to store the huge amount of data generated. Download this case study to find out how Vedanta Biosciences, Inc. utilized Thermo Scientific Core LIMS™ and Core ELN™ software.

How can target-based drug discovery help us better prepare for global pandemics?

With a lot of uncertainty about what drugs could be used effectively to treat COVID19, and several high-profile paper retractions – including the infamous hydroxychloroquine paper9* – we asked Angell how target-focused drug discovery can help us better prepare for future global pandemics: “One of the main things that has come to light is the challenge in accelerating the drug discovery process… we believe there has been a significant underinvestment in antiviral drug discovery and drug discovery for coronaviruses in particular over the last 10–20 years”. Consequently, Angell and colleagues have established a not-for-profit company focusing on coronaviruses.

“We want to develop a portfolio of 20–40 poised compounds that are shown to be active against a range of coronaviruses so that when a future pandemic emerges you can quickly profile those candidates as a potential treatment,” explains Angell.

Identifying good targets for antivirals is theoretically more straightforward than finding targets for more complex diseases such as Alzheimer’s or cancer where the mechanistic landscape is less well understood. Viruses have a small genome and generally, you can focus your efforts on either viral entry or viral replication. “Our focus is to inhibit viral replication specifically by going after the polymerase – the sequence homology, particularly between the active sites of polymerases from different strains of coronaviruses is very high. We’re reasonably confident that a good inhibitor against one strain would have a good crossover into future strains that could emerge.”