The Role of Phenotypic Screening in Drug Discovery

Interest in phenotypic screening as a means for small-molecule drug discovery has continued to increase in recent years. Not too long ago it seemed that the more traditional phenotypic, pharmacologic and physiologic approaches were being neglected as target-based approaches and genomics began to take center stage. And of course, once one pharmaceutical company adopts the genomics method, every other company seems to follow suit. During an ELRIG Drug Discovery conference, presenter Dr. Nessa Carey, International Director at PraxisUnico, raised the question: “Where is the next generation of genuinely practical [drug] targets?”

Fortunately, there has been a resurgence of interest in the use of phenotypic screening as an alternative to target-based screening.1 There is an ever-growing curiosity about the potential benefit of combining phenotypic and genomic data, in the quest to advance small-molecule drug discovery.

Despite there being a lot of emphasis on target-based drug discovery, it hasn’t actually translated into the approval of effective medicines.

This was supported by analysis of drug discovery strategies from the US Food and Drug Administration (FDA) which concluded that of the first-in-class small-molecule drugs discovered, a greater number were identified using phenotypic screening compared to target-based screening.2

What is phenotypic screening?
Phenotypic screening is a strategy used in drug discovery to identify molecules with the ability to alter a cell’s phenotype. Animal models and cell-based assays are both strategies used to identify these molecules.
“An image is worth a thousand words is something we hear often. In life sciences, we could say an image is worth a thousand data points (or more) …the sheer amount of content that can be derived at a single cell level is an advantage over other methods,”  Dr. Davide Danovi, Director, HipSci Cell Phenotyping, Kings College London.

In contrast to target-based drug discovery, phenotypic screening does not rely on knowing the identity of the specific drug target or its hypothetical role in the disease. A key benefit this approach has over target-based screening, is its capacity to capture complex biological mechanisms that are not otherwise achievable.3 Increasing the understanding of the cell signalling networks involved in a disease process can decrease the amount of clinical failures by identifying factors contributing to unexpected activity, toxicities and lack of efficacy.4

“There is a wealth of information in how single cells appear in terms of cell morphology and the morphology of their nuclei and other organelles, information derived from staining, from simple nuclear dyes to immunocytochemistry detection of specific proteins, and even context features such as how cells are organizing in complex patterns or deciding to have some space for their own,” Dr. Davide Danovi, Director, HipSci Cell Phenotyping, Kings College London.

These allow direct screening of compounds in preclinical disease models. A drawback is that these models are usually lower-throughput due to their intricacy. Higher-throughput large-scale in vivo phenotypic screens have been developed and could potentially be used for testing an array of diseases simultaneously.3 Although in some cases these may not be commercially or ethically viable.

There is an alternative. Innovative automated phenotypic screening platforms have been developed to mirror the in vivo environment in an in vitro setting, ultimately capturing the insights typically gained from performing in vivo assays.5 Having the ability to screen compounds across multiple human disease models, in a high-throughput automated fashion is surely a ‘win-win’. Safety, efficacy,6 potency, toxicity7 and mechanism of action information can all be generated from the one platform, to ultimately determine the therapeutic potential in a system mirroring patient physiology.

Cell-based (in vitro) assays present a significant advantage; namely, these can be easily adapted to a high-throughput format for automated phenotypic analysis.3 Although there has been considerable advancement in phenotypic cell-based screening tools there are still challenges associated with this approach. These include validation of ‘hits’ and uncovering the molecular targets of these hits, also known as target deconvolution.8,9 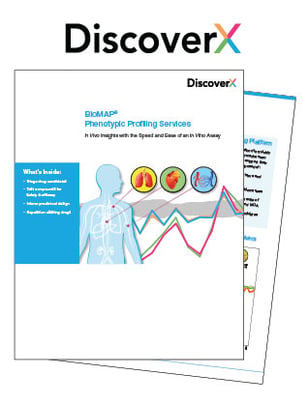 BioMAP® is the broadest, most physiologically relevant method to quickly and robustly determine the efficacy, safety, and mechanism of action (MOA) of candidate drug molecules to support their pipeline progression.

Miniaturization: Getting the most out of your assay

There are known barriers to implementing a high-throughput approach to cell-based assays, these include; cost, availability of cells, and the complex multi-step methodology required to perform an assay, all factor in to the equation. So, it begs the question, ‘what can be done to increase the scalability potential of an assay?’ to make the high-throughput dream a reality.

Adoption of a 1536-well format combats some of these factors, reducing overall cost and improving the efficiency of hit identification. However, implementing 1536-well format plates isn’t always plain sailing, care must be taken to conserve assay data quality and factors such as edge effects (known to deteriorate assay performance in a high-throughput setting) need to be kept in check. 10,11

Accurate dispensing and thorough plate washing — by no means the only considerations, but important nonetheless, are key factors for a successful assay. Adopting accurate dispensing and thorough plate washing techniques, in an automated setting, allows you to generate an assay of good, consistent quality ultimately leading to optimized screening results. When dispensing and aspirating, it is paramount that pipette tip height be calculated carefully. Difficulty in achieving a consistent aspiration height means that excess liquid can be left in the bottom of the plate at the end of the procedure, leaving residual growth media, which is known to affect cell viability.12 Alternatively, an aspiration height too close to the bottom of the plate well can result in disturbance of the cell layer. Putting an alternative ‘spin’ on washing, a recent paper by Corin Miller et al. replaced aspiration with centrifugation as a means for removing growth media from their in vitro receptor potency assays.13 This method alleviates the concern that pipette tips could potentially disturb the assay.10 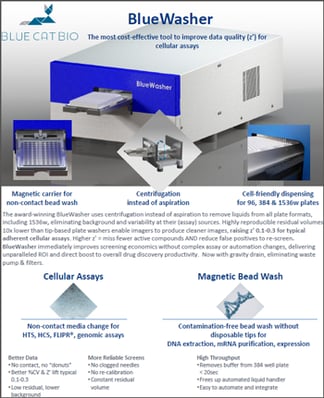 Download this free guide to learn more about BlueWasher - the most cost-effective tool to improve data quality for cellular assays from Blue Cat Bio.

Three-dimensional (3D) tissue culture systems have the advantage of providing a more accurate physiological setting, compared to two-dimensional (2D) monolayer cultures. Although valuable, 2D cell cultures used in cell-based screening have limitations as there is restricted ability to reflect efficacy in an in vivo environment, which can lead to misleading data.14 This is certainly an area that requires further progression and advancement, to increase the identification of compounds with the potential to progress to clinical development.

What applications are 3D cultures particularly suited to? Dr. Richard M. Eglen, Vice President and General Manager, Corning Life Sciences.
“There are clear limitations in tissue culture per se, some of which (I would contend a minority of which actually) are being addressed by 3D culture methods. Spectacular images can be acquired with sophisticated microscopy technologies and these are often impossible to turn into actual data in robust phenotype screening with a decent throughput. On the other hand, simpler images when analyzed lend themselves to the acquisition of thousands of features that are also not easy to wrestle down. Cumbersome computational infrastructure, very few standards, difficult to grasp the reproducibility of experiments, for example, done in different laboratories are major points to work on.” Dr. Davide Danovi, Director, HipSci Cell Phenotyping, Kings College London.

Phenotypic screening: Where do we go from here?

Although phenotypic screening does come with its limitations, several approaches are already in development to help overcome these challenges and optimise its use as a successful approach to small-molecule drug discovery.

Approaching screening techniques with caution and streamlining assay protocols, adapting to high-throughput methodology and carefully considering which factors are likely to influence quality should all help to maximize the success of your screening assay.

It will be interesting to see what impact this resurgence of phenotypic screening has on novel drug discovery, and whether we see an increase in the percentage of new molecular entities identified using phenotypic methods in the coming years.

Complete the form below to unlock access to this Audio Article: "The Role of Phenotypic Screening in Drug Discovery"