The life of a protein

Proteins are synthesized based on mRNA templates in the process of translation, which takes place in an organelle known as the ribosome (Figure 1). Ribosomes are ribonucleoprotein complexes that are found either in the cytosol or associated with the endoplasmic reticulum (ER). After translation, newly produced proteins fold into their native structures, often with the help of chaperones, and are transported to their target cellular compartment.

The half-life of a protein varies and can range from minutes to even years, as is seen for some components of the extracellular matrix. When proteins do degrade, they are broken down via two main routes:

In this article, we will discuss the mechanism of ubiquitin-mediated proteasome-dependent degradation and discuss how it has been employed to design novel therapeutics that can turn any class of human proteins into a therapeutic target.

Ubiquitin is a small ~9kDa protein that is present in virtually every human cell, usually in the form of multimers or linked with other proteins. Conjugation of proteins with ubiquitin is the basis of a ubiquitin-mediated proteasome-dependent degradation. This is a highly regulated mechanism that involves three types of enzymes (Figure 2).

The initiator of this reaction is ubiquitin-activating enzyme E1, which produces the active thiolester form of ubiquitin. E2 ubiquitin-conjugating enzyme binds to activated ubiquitin, while E3 ligase recruits the cellular protein targeted for degradation and mediates the transfer of ubiquitin to a lysine residue of the target protein. In most cases, this process is recurrent, leading to extension of the ubiquitin chain because ubiquitin molecules also possess a lysine group. The polyubiquitinated proteins are then recognized by the 26S proteasome, a multimeric complex composed of a 20S core and 19S regulatory particles present at one or both ends. 19S particles recognize polyubiquitinated proteins as substrates, while the 20S core executes protein degradation.

Figure 2. Protein ubiquitination (Credit: Proteintech) A cascade of ubiquitin activating enzyme E1, conjugation enzyme E2 and ubiquitin ligase E3 is responsible for the transfer of a ubiquitin molecule onto a target protein.

The first generation of PROTACs used peptides derived from natural ligands of E3 ligases for their recruitment6,7, which provided the desired activity but were often not cell permeable, or required micromolar concentrations for efficient target degradation. A shift to the use of engineered small molecule E3 ligase ligands lowered their molecular weight, improved cell permeability and potency.1,2 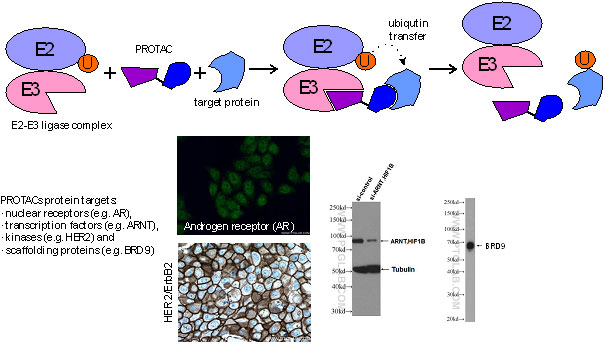 Advantages of PROTACs over other modalities

Generally, the two most common types of therapeutics are small molecules and monoclonal antibodies (mAbs). Small molecules are quite versatile and can act on both extracellular and intracellular targets, unlike mAbs that predominantly target extracellular proteins such as cell receptors (Table 1). Both small molecule and mAbs mostly act via binding to a target molecule in order to affect a given result – for example, prevent its activity, inhibit binding with other partners or activate a certain pathway. MAbs usually provide high specificity with low toxicity, which is often difficult to achieve with small molecule drug candidates. On the other hand, small molecules usually have better tissue penetration due to low molecular weight, with a shorter half-life and shorter pharmacodynamics. Novel modalities, such as antibody-drug conjugates (ADCs) or Fc-fusion proteins try to overcome some of these challenges. However, they do not overcome the main obstacle: they do not considerably expand the class of proteins that are druggable by these modalities.

PROTACs’ mechanism of action is based on selective binding to a target protein to trigger its catalytic degradation. Unlike other modalities, the binding site does not have to be restricted only to certain protein domains, e.g. active sites of enzymes in order to compete with their substrates or protein interaction sites to block the binding.

Theoretically, any site on the protein surface can be targeted by PROTACs as long as it provides specificity for the given molecule. This also offers a great advantage over small molecules for selectively targeting mutated proteins or protein isoforms. An interesting concept is to use target protein binding domains that are functional only in certain cell states – for example phosphoPROTACs are active only in a phosphorylated state.3 Because the PROTAC mechanism of action involves catalytic degradation of the target protein, PROTACs can target scaffolding proteins, non-enzymatic protein-protein interaction targets or toxic protein aggregates. Even low doses of the drug should be sufficient for its action.

The future of PROTACs

PROTACs undoubtedly have the potential to change the drug discovery landscape in the forthcoming years. Proof-of-principle studies have demonstrated their degradation activity towards various protein targets, including nuclear receptors, transcription factors, kinases and scaffolding proteins in cell-based experiments (Figure 3). The first PROTAC molecules are now reaching clinical stages of development. Current efforts focus on discovery and improvement of existing E3 ligase linkers, and also on gaining a better understanding of tertiary complexes between target proteins to decipher what drives target degradation. For example, it has been recently shown that PROTACs designed to target motifs present in many proteins can successfully associate with the vast majority of them, but trigger degradation of only a fraction of them.4 At present, there are no in silico models that would correctly predict success. Others focus on improving cell permeability of PROTACs by altering ligands and re-designing linkers. An interesting approach is delivery of two PROTAC precursors that would assemble into a functional PROTAC molecule inside the cell using click chemistry (so called CLIPTACs).5