Complete the form below and we will email you a PDF version of "What Is DMPK (Drug Metabolism and Pharmacokinetics)?"

In this article, we will discuss what is meant by drug metabolism and pharmacokinetics (DMPK) and explore its role in various stages of pharmaceutical development.

Drug metabolism and pharmacokinetics disciplines help to confirm which drug candidates may warrant further investigation and development. DMPK studies can be performed throughout the drug development process helping to determine the pharmacological characteristics of a drug candidate by focusing on its absorption, distribution, metabolism, excretion (ADME) and pharmacokinetic properties.

Drug metabolism is the conversion of a drug molecule into other related compounds throughout the body. The modification of an administered drug is a normal process carried out by drug modifying enzymes (DME) such as cytochrome P450. Even though drug metabolism in numerous locations within the body, the liver is the primary organ involved in the modification and removal of drug compounds.

Pharmacokinetics is a collection of pharmacological processes that measure how much drug is available throughout the human body over time. Thorough testing of a drug’s ADME properties will collectively inform researchers how the body affects the drug once it is administered. Collectively, ADME qualities provide deeper insights into the performance of a drug and help to establish the optimal dosage.

Absorption studies determine how an unmetabolized drug moves from the site of administration into the bloodstream. “Bioavailability” is the term used to describe the degree and rate to which an absorbed drug enters the circulation.

There are specific biochemical characteristics that influence the absorption profile of a drug such as its size, ionization, solubility, mechanism of transport and dissolution. These factors, in conjunction with the drug target’s location, help determine the best path of administration for a candidate drug. 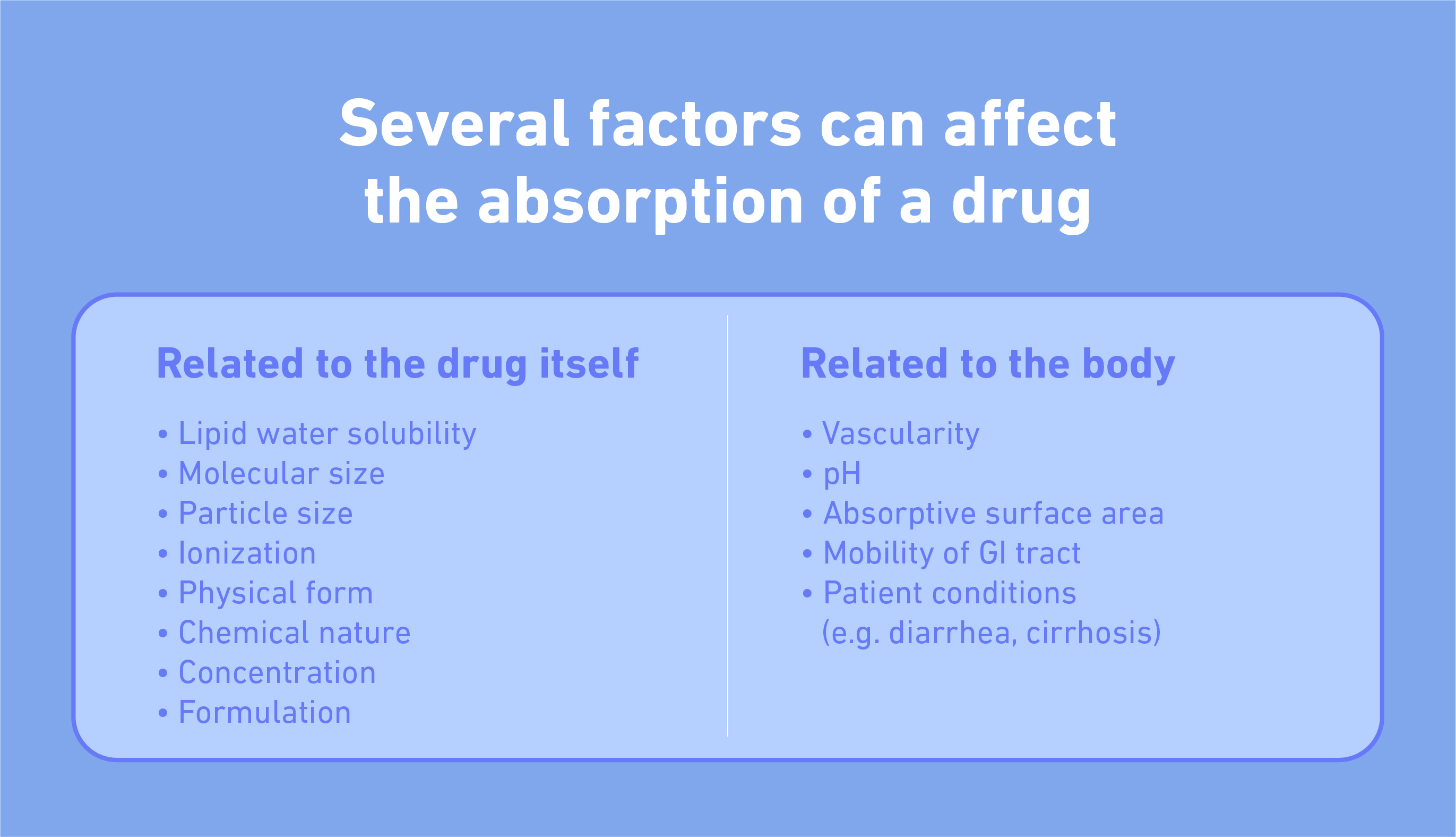 What can affect the absorption of a drug?

After a drug is administered, it is important to understand its dispersal throughout the body. Distribution studies investigate the route a drug takes to reach its target site and its distribution across various bodily tissues. Some of the most common factors that affect drug distribution include anatomical structures like the blood–brain barrier, the vascularity and competing plasma-binding proteins found throughout the bloodstream.

Metabolism qualities of a drug candidate encompass any modification to it by bodily organs or enzymes. This process is one of the most important parts of the DMPK process since these data outputs are closely linked to the potential efficacy, or toxicity, of a drug when it enters the human body.

Lastly, excretion studies investigate how a drug is ultimately removed from the body. There are several ways a drug can be excreted. 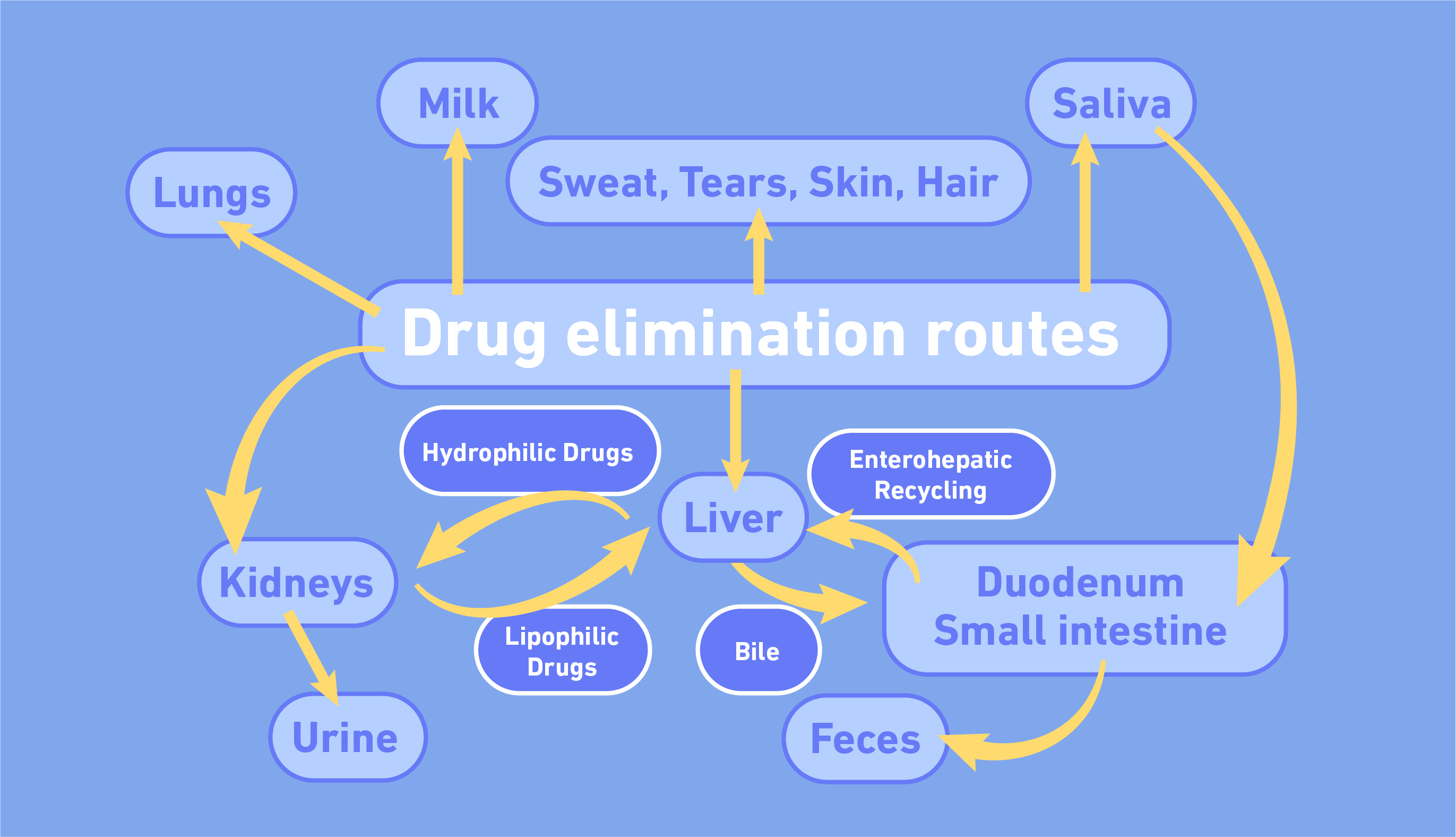 Drug elimination routes in the body.

The foundation of PK studies involves the use of preclinical in vitro and in vivo experimental models to study ADME properties. In DMPK, in vitro models offer relatively simple screening assays that cover the entire spectrum of ADME properties for a drug of interest. These studies measure PK outputs such as solution properties, drug absorption and transport, metabolic stability and identification, drug–drug interactions (DDI) and toxicity.

Modern advances in cell culture technologies allow research scientists to study a drug’s ADME properties with greater speed and user specificity.  For example, the development of 3D organoid systems – small self-organizing 3D assemblies of cells – increases the ability to predict drug metabolism and toxicity of lead candidates. Additionally, the use of patient-derived cells in tissue-specific systems allow researchers to study the effects of a drug in a personalized manner.

A drug candidate moves into the clinical stages of the discovery process after preclinical safety studies are completed. Clinical trials consist of three or more phases that collectively evaluate a drug’s safety, dosage, side effects, efficacy, DDIs, and long-term performance once administered to humans.

Phase I drug trials are the first instance in which an investigated drug is observed within humans. Tests performed throughout this phase determine the maximum tolerated dose and general safety of a drug when administered to a small number of trial participants. Phase II trials typically investigate drug pharmacokinetics (PK) to better understand a drug’s therapeutic efficacy and bioavailability. Such studies also build upon Phase I by further evaluating the safety of a drug when administered to participants with a particular disease.

Once a drug demonstrates safety and efficacy throughout the first two phases, then Phase III studies can commence. These later-stage trials usually involve up to 3,000 participants who have a disease (or condition) that the drug of interest is meant to treat. This stage is designed to “confirm” the therapeutic efficacy of a drug by studying its safety and PK in a larger population.

Pharmacogenomics, the application of genomic information to identify genetic variants that influence drug effects, is an emergent field that enhances the precision of PK studies with high resolution. By applying pharmacogenomics throughout the drug discovery process, the identification of genetic variations linked to drug efficacy in vitro can lead to optimized drug dosage in the clinical stage.

The post-approval stage of the drug development process involves the collation of long-term safety and efficacy data now that it has been approved and is being more widely used. This includes routine inspections of drug manufacturing facilities, regulation of drug advertisements, and surveillance programs whereby healthcare providers and drug users can report adverse effects experienced with any approved drug to the respectable regulatory authority.

Jonathan Dornell, PhD
More from this author >
Advertisement
Chosen for You
Listicle