In drug discovery, time and monetary investments increase significantly the further candidates advance through the preclinical phase of testing, analysis and evaluation. By excluding non-viable compounds for safety and toxicity reasons early on, resources can be redirected to bring the most promising drugs to market sooner.

Understanding drug candidates’ effects on various organs is a central element of safety testing while it is also one of the industry’s greatest challenges. The heart and liver are particularly vulnerable, and toxicity to either of these two organs are responsible for about 30% of failure in clinical trials.1

Cardiotoxicity, for example, is a well-known side effect of many pharmaceutical drugs and a leading cause of safety-based compound attrition in the preclinical stage.1 Assessing cardiotoxicity on the front-end of drug discovery enables researchers to identify potentially toxic compounds and either eliminate or modify them to improve their safety profile. As such, researchers continuously strive to find and develop tests that accurately predict how human heart cells will respond to a potential drug – in other words, create more biologically-relevant assays. Equally important is an assay’s suitability for high-throughput screening to further reduce high costs and inefficiencies associated with compound failure in the clinic.1


The heart is quite complex, making it important to understand that drugs can have both structural and functional effects on heart cells. Yet without advanced methods, it can be difficult to effectively and reliably characterize the full array of their responses to a given compound.

Developing assays based on human cardiomyocytes (heart muscle cells), derived from stem cell sources, can greatly accelerate the development of new chemical entities and improve drug safety, by offering more biologically relevant cell-based models than those currently available. Relying on animal models for preclinical toxicity testing has significant drawbacks. For example, mice may not be as sensitive to toxicities as humans or may metabolize a compound differently. Moreover, this approach is not often feasible for labs looking to conduct trials on a vast number of drug candidates.

Increasingly common is the use of human induced pluripotent stem cells (iPSCs). These are created by reprogramming human blood cells into a stem-cell-like state, at which point they can evolve into different tissues including liver, neuronal, or cardiac cells. iPSC-derived human cardiomyocytes are especially attractive because they express ion channels and demonstrate spontaneous mechanical and electrical activity similar to native cardiac cells. As a result, they can be used as a model system to measure the impact of pharmacological compounds on the rate of spontaneous contraction.

Fast kinetic fluorescence imaging can then be applied to measure the impact of pharmacological compounds on the beating rate of stem cell-derived cardiomyocytes. Assays employ calcium (Ca2+) sensitive dyes to monitor changes in Ca2+ oscillations synchronous with cell contraction, which allows monitoring of oscillation rate, amplitude, and disturbances of a pattern.

Our work has centered on cardiomyocytes derived from adult iPSCs (Cellular Dynamics, Fujifilm) which have many components of a “real” or native heart cell.2 In fact, they demonstrate the spontaneous mechanical and electrical activity of a heart cell, naturally “contracting” in culture.

In one of our earlier studies,3 we exposed iPSC-derived cardiomyocytes to various concentrations of more than 100 compounds. These included compounds that were known to be toxic to the heart in animals and others that were proven to have adverse effects in humans, as well as controls which were shown to be safe. We used a high-throughput cellular screening method to analyze fluctuations in Ca2+ inside cells, since Ca2+regulates heart cell activity and is synchronous with contraction. To do this, we applied Ca2+ sensitive dyes to our samples and recorded the signal patterns using a fast-fluorescent kinetic reader instrument that takes high frame-rate images of the Ca2+ oscillations. 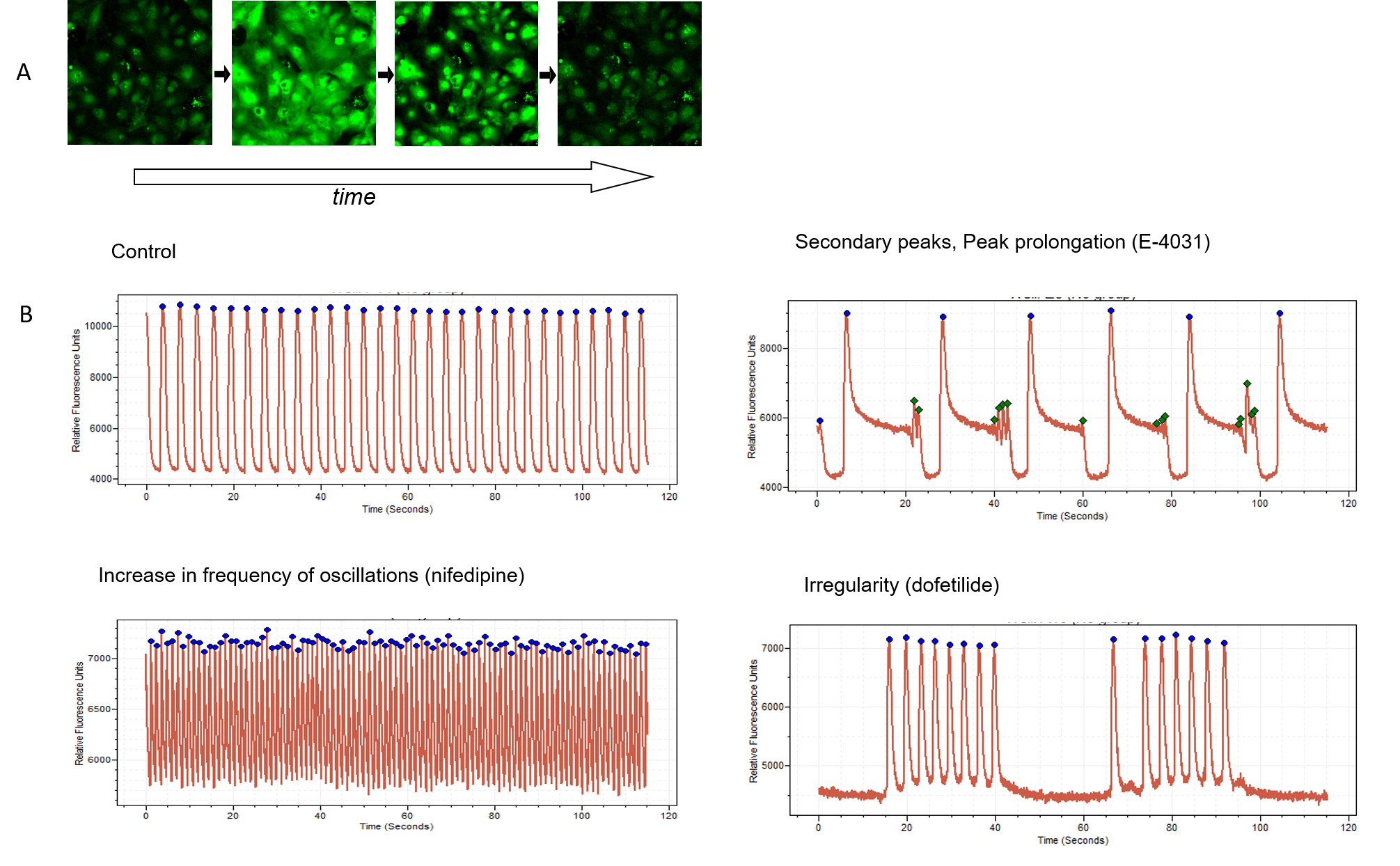 Complex analysis provided by advanced software allows detection and multiparametric characterization of Ca2+ oscillations to reveal complex patterns, secondary peaks, waveform irregularities, and more than 20 other important readouts. Changes in such patterns can flag compounds potentially toxic to heart function. For instance, sodium (Na+) channel blockers cause narrow peaks as well as irregularities in beating patterns. Conversely, drugs that block the hERG channel that is related to a potentially fatal heart condition in humans known as Long QT Syndrome, appear to produce peak prolongation and secondary oscillations in the cell assay. For deeper analysis, cellular and mitochondrial toxicities, as well as cardiac cytoskeleton patterns, can be evaluated using high-content imaging methods. Having access to information at this level of detail makes this assay extremely useful for preliminary toxicity identification efforts.


We have also begun to extend these methods to three-dimensional (3D) heart cell models, called cardiac spheroids.4 When stem cell-derived cardiomyocytes are placed in unique, U-bottom shape, low attachment plates, the cells naturally form spheroids after a couple of days. Similar to the method described above, we can expose the spheroids to various compounds and measure their responses using Ca2+ fluorescence and high-content confocal 3D imaging. An advantage of a 3D system is that in addition to the measurements in the two-dimensional (2D) model, it allows for analysis of additional parameters such as architectural or structural changes.

While comparing results derived from 2D and 3D models, 3 we’ve found agreement between the two, but notable differences in the concentration responses and time dependencies of the effects. The results suggest that 3D cardiac spheroids make for a model that has some unique advantages over 2D models, potentially better predicting an aspect of drug penetration into the tissues.

Cell models with greater complexity, such as 3D, have understandably gained popularity because of their closer mirroring of in vivo environments and, potentially, more reliable responses to drug exposure. They may reveal more about cell organization, cell–cell and cell–matrix interactions, and drug penetration.


There are other useful applications for these methods as cardiac toxicity can occur not just from exposure to medications, but also to environmental chemicals. These molecules – byproducts of gasoline purification, pesticides, household cleaners, and flame retardants – are thought to be responsible for 23% of heart disease cases. 5 Therefore, in another study, we used the method to test the effects of 69 environmental compounds on cardiac cells and found that the approach was successful in identifying toxicity effects by measuring changes in the Ca2+ oscillation patterns.6 The application is noteworthy for its relevance to Tox21, an initiative among several governmental organizations that seeks to map out the toxic effects of environmental compounds, since much is still unknown about their full consequence on human health.7 This approach provides a method to understand how various chemicals—from environmental pollutants to food additives—may affect all the cells and systems of the body, allowing for rapid and scientifically-informed evaluation of potential hazards to human health caused by existing substances and their chemical alternatives.8

5. Prüss-Üstün A, Corvalán C. Preventing disease through healthy environments: towards an estimate of the environmental burden of disease. World Health Organization. 2006:6-89.

6. Toxicity Testing in the 21st Century: A Vision and a Strategy. National Research Council. 2007.