Infectious diseases remain a major health threat, as demonstrated by the emergence of COVID-19, which to date, is responsible for more than one million deaths globally. The ongoing evolution of viral variants makes it likely that emerging infections will continue to occur – highlighting the need to develop new therapeutic and preventive approaches. Cidara Therapeutics has adopted key immuno-oncology principles and applied them to infectious disease, enabling the creation of a novel antiviral strategy – antiviral conjugates (AVCs). AVCs are long-acting, bispecific drugs that directly inhibit viral proliferation, whilst simultaneously stimulating clearance of the virus.

Jeff Stein, PhD, President and CEO at Cidara Therapeutics tells Technology Networks more about AVCs, the indications they are being designed to treat and elaborates on the development of the company’s lead AVC candidates CD377 and CD388.

Laura Lansdowne (LL): What are antiviral conjugates (AVCs)? Can you elaborate on their design, mechanism of action, and the potential benefits to using them as a therapeutic strategy against viral disease?

Jeff Stein (JS): Cidara is developing a fundamentally new class of drug candidates called antiviral conjugates (AVCs) from its Cloudbreak® antiviral platform. AVCs are designed to be long-acting and both treat and prevent serious viral infections. The company is currently researching AVCs for influenza, human immunodeficiency virus (HIV), respiratory syncytial virus (RSV) and coronaviruses. AVCs directly inhibit viral proliferation while simultaneously directing immune-mediated clearance of the virus. The structure of AVCs enables these two distinct and complementary mechanisms by stably coupling a potent antiviral targeting domain to an effector domain comprised of a proprietary variant of a human antibody fragment (Fc). The modular nature of the platform stems from modifying the antiviral targeting domain, which can be a small molecule or peptide for target specificity (Figure 1a), or the Fc fragment for differential immune engagement and long half-life. AVCs are not vaccines, monoclonal antibodies or traditional antivirals, but rather a fundamentally new approach to protection from and treatment of viral infections. 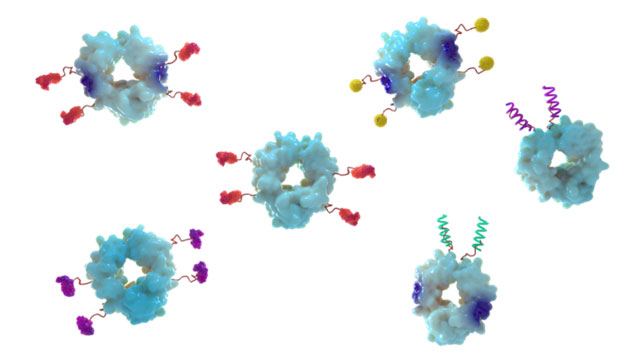 Figure 1a: AVCs with different targeting and effector domains for influenza, HIV, RSV, coronavirus, and more.

Cidara is currently conducting preclinical and investigational new drug (IND)-enabling studies with AVC candidates targeting influenza. Cidara is also conducting preclinical studies with AVC candidates targeting HIV, RSV and coronaviruses, including SARS-CoV-2. Early lead molecules for each indication have been discovered with potent activity against each of these viruses in cell-based viral replication assays. Since AVCs target carefully selected cell surface proteins that are highly conserved and essential for virus survival and replication, instead of potentially variable surface antigens on the virus, they are not as susceptible to resistance as are vaccines and monoclonal antibodies, and have the potential to provide universal protection. Mouse studies show AVC candidates in influenza are more effective against certain viral strains than comparator drugs.

JS: Cidara’s lead AVC program is CD377 (Figure 1b), a development candidate for universal treatment and prevention of influenza, or the flu, with potential as a single dose per flu season. From a public health standpoint, the flu vaccine is the best option currently available to protect from influenza. However, in the last five years, the flu vaccine has been effective in only 20–50% of people. The numbers are even more dire for those 50 years and older, protecting less than 15% of people last year, highlighting the significant need for better protective options. 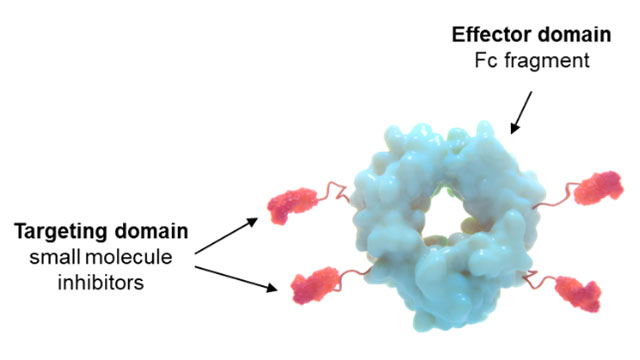 Cidara is also conducting IND-enabling studies for CD388, a longer-acting version of CD377. Both CD377 and CD388 flu AVCs could potentially change the way seasonal influenza is prevented with their potent, long-lasting universal protection. The targeting domains are small molecule inhibitors that bind to and inhibit a highly conserved target on the influenza cell surface – neuraminidase (NA), which is essential for viral proliferation – enabling universal influenza coverage. When the targeting domain is bound to viral proteins on infected cells, AVCs can also recruit and activate natural killer (NK) cells by effector domain engagement with the Fc receptor on the surface of NK cells. This leads to the release of cytotoxic granules that destroy the infected cell (Figure 2). 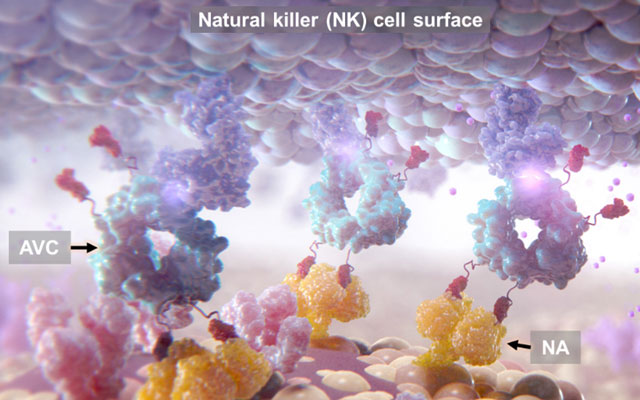 CD377 and CD388 have the potential to offer significant advantages over the current flu vaccine, including universal protection, against all influenza strains and for all people, even those with a compromised immune system. The goal of flu AVCs is to allow for long-term protection with a single dose per flu season that concentrates in the lung, where it can fight the virus at the site of infection. Overall, this approach to influenza is distinct from current therapies and traditional vaccines, coupling potent antiviral activity to immune system engagement with one drug. A single dose of either flu AVC could prevent infections by all strains of influenza for an entire flu season. Importantly, this protection is expected to extend to individuals with compromised immune responses who are most vulnerable to infection and are least responsive to vaccines.

LL: Could AVCs be used as a potential strategy against the novel coronavirus SARS-CoV-2?

JS: Cidara is using its antiviral platform to synthesize AVCs with the goal of providing long-lasting, universal protection from all coronaviruses, including SARS-CoV-2. The relatively small size of AVCs allows for rapid concentration in the lungs to attack the virus and fight off infection. In COVID-19, where severe lung damage is common, protection at this site first invaded by respiratory viruses is crucial. When the genetic sequence of SARS-CoV-2 was released in January 2020, Cidara synthesized novel AVC candidates, comprised of peptides with antiviral activity fused to a proprietary variant of the Fc fragment (Figure 3).

These AVCs were designed to block the critical step of viral fusion to host lung epithelial cells, while simultaneously recruiting immune cells to fight the infection. In vitro testing of initial candidates against a panel of coronaviruses has identified potent candidates for further evaluation in animal models.