In Vitro Toxicology Testing: Dismantling the Barriers via Collaboration

In Vitro Toxicology Testing: Dismantling the Barriers via Collaboration

Complete the form below and we will email you a PDF version of "In Vitro Toxicology Testing: Dismantling the Barriers via Collaboration"

In the first part of this blog series, we explored some of the barriers preventing widespread adoption of biomimetic in vitro models for toxicity testing, which is important to ensure the safety of newly developed substances, such as therapeutic drugs and food additives. The progression of biomimetic in vitro models is also being held back mainly due to the difficulty of making newly developed tools commercially available. This isn’t because demand is low; the overall market for in vitro toxicology is expected to reach $4.1 billion by 2018. Rather, it’s because the tool developer is unlikely to have sufficient resources to manage the risks and costs associated with the lengthy process of officially validating the tool.

Even if the resources are secured, the path to official validation takes many years, after which the new tool may have become outdated due to the current fast pace of innovation. In addition, many companies outsource their toxicity testing to Contract Research Organizations (CROs), which are generally restricted to using the most established protocols with specific regulatory guidance. This not only discourages internal innovation in CROs, but it also means that any new tool developed externally will come up against a wall blocking it from widespread adoption in the market until there are regulatory guidelines available that address how to use it.

The difficulties in bringing new tools to the market creates a ‘catch-22’ situation: the development of new tools is discouraged, which prevents further progression of biomimetic in vitro models for toxicity analysis, the lack of which further deters interest in developing new tools, and so on. Therefore, progress needs to be made to overcome these challenges and drive forward innovative new tools for in vitro toxicity analyses. Could promoting synergy among the key cogs in the wheel – industry stakeholders, tool developers and regulators – be the answer?

The ease in which newly developed in vitro tools for toxicity testing can be brought to market depends on cross-talk among the key cogs in the wheel: industry stakeholders that oversee the testing; regulators who provide guidance on the testing; and the tool developers who produce the testing tools. 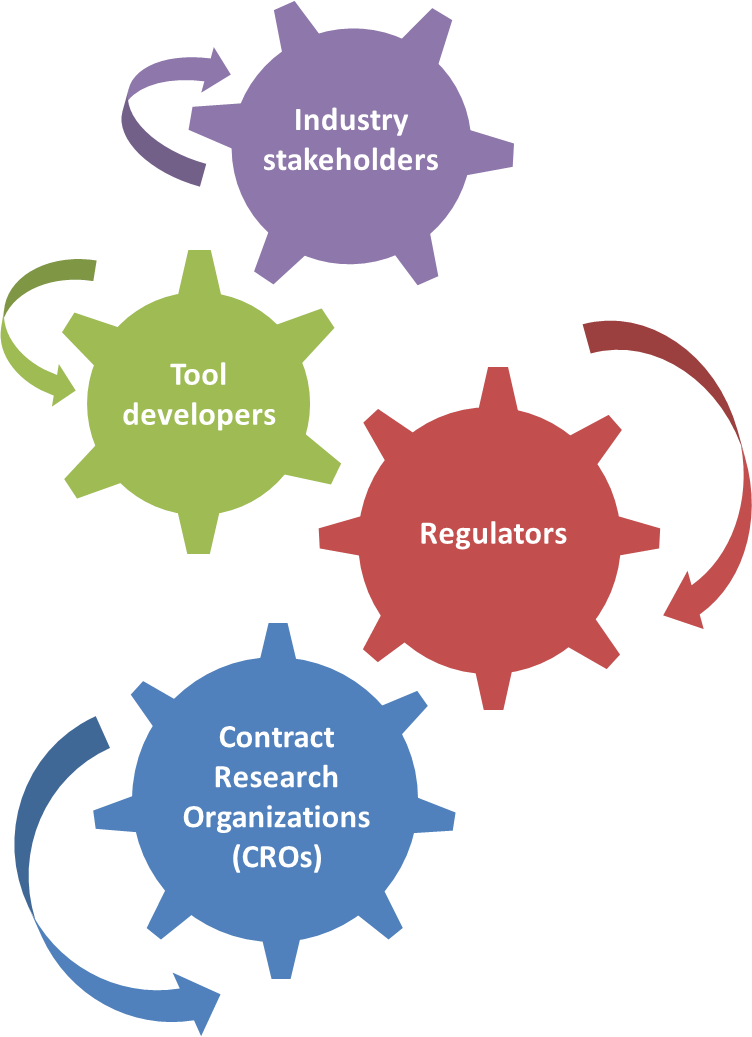 Promoting synergy among the key cogs in the wheel: industry stakeholders, tool developers, regulators and Contract Research Organizations (CROs) should work together to drive forward innovations in in vitro toxicology testing.
Such cross-talk could drive forward the progression of in vitro toxicity analyses. Firstly, tool developers could partner with larger pharmaceutical companies to bear the risks and costs of optimizing a new tool for the market, creating a win-win situation in which pharma obtains a valuable new tool while the tool developer gains a high-value customer. Secondly, upstart Contract Research Organizations (CROs) could partner with tool developers to create sustainable business models that support the larger pharmaceutical companies to drive forward new technologies. Finally, the regulatory agencies must also be engaged and consulted in these efforts.
Collaboration among these key players could also promote wider adoption of new in vitro assays. When seeking to make their product commercially available, tool developers are typically faced with major commercial competition from established, standardized methods that are at times required by regulatory agencies. In other words, the choice of methods a company uses is in many cases dictated by regulatory expectations. In keeping costs low, many firms are not willing to try anything new and only dedicate resources towards the methods required by regulatory agencies. Therefore, tool developers need to form robust partnerships with both end-users and regulators, so they can share risks and drive the field forward.

The benefits of collaboration

One initiative started in 2013 by the non-profit ILSI Health and Environmental Sciences Institute ran workshops in which attendees from pharmaceutical companies worked independently with tool developers, CROs, and regulatory agencies to replace thorough QT testing with enhanced in vitro methods for assessing cardiovascular toxicity.

Since then, much progress has been made among this multidisciplinary team to develop the Comprehensive in vitro Proarrhythmia Assay (CiPA), which is currently undergoing a validation program and promises to amend regulatory requirements for proarrhythmia assessments.

Another initiative in 2015 reviewed non-animal alternatives for acute systemic toxicity testing and explored ways to facilitate the implementation of in vitro alternatives. Involving input from representatives of international regulatory agencies, academia, nongovernmental organizations, and industry, the resulting strategy to achieve near-term progress was published earlier this year.

Studies have also started to demonstrate the preclinical value of in vitro biomimetic liver models for toxicity testing. For example, induced pluripotent stem cell-derived hepatocyte-like cells (iPSC-derived HLCs) are a few steps away from human clinical application, with great promise for in vitro drug toxicity screening because they have a sufficient metabolic profile and CYP activity.

The future of in vitro toxicity testing

Promoting the adoption of in vitro toxicity testing is an important undertaking, so we should strive to overcome the barriers preventing its widespread adoption. Already, collaborative efforts have made progress in this regard, and research advances are increasingly demonstrating the potential of in vitro biomimetic liver models. As tool developers work more closely with regulatory authorities and pharmaceutical companies to drive innovation and commercial access, the more likely we will be able to identify ever better ways to protect our health.
Advertisement
Chosen for You
Whitepaper