Human endogenous retroviruses (HERVs) are a family of viruses that began to be integrated into the genome ~30–40 million years ago, HERVs account for up to 8% of human genomic DNA. HERVs are known to be implicated in a range of diseases.

Laura Mason (LM): Could you tell us about GeNeuro, the company history, mission and goals?

Hervé Perron (HP): GeNeuro is a biopharmaceutical company developing new treatments for neurological and autoimmune diseases, including multiple sclerosis (MS) and type 1 diabetes (T1D), associated with pathogenic proteins expressed by human endogenous retroviruses (HERV). The company was founded in 2006 based on pioneering HERV research conducted over 15 previous years within Institut Mérieux and INSERM.

HP: Human endogenous retroviruses (HERVs) are remnants of ancestral viral genomic insertions. They are known to represent 8% of the human genome and are associated with several pathologies. In particular, the envelope protein of HERV-W family (HERV-W Env) has been shown to be a causal factor in MS and T1D pathogenesis.

LM: Could you touch on the link between HERVS and certain autoimmune diseases?

HP: The hypothesis of a link between multiple sclerosis and retroviruses was first published in a paper co-authored by Hilary Koprowski and Robert Gallo (Nature 1985. 318: 154-160). Through my research at Institut Mérieux, I discovered that cerebrospinal cell cultures from MS patients but not controls expressed retrovirus like particles. The molecular characterization of this MS-associated retrovirus, MSRV, revealed a novel human retrovirus but not a new HTLV as previously expected and unravelled a previously unknown family of HERVs now named HERV-W (J Virol 1999. 73: 1175-1185).

HERV-W is normally latent in the genomes of healthy individuals, and does not express pathogenic proteins, but it can be re-activated by certain co-factors, such as viruses of the h erpes family, to express a pathogenic envelope protein (pHERV-W Env).

Pathogenic HERV-W Env appears to be a triggering and aggravating factor in the development and progression of some neurological diseases. It is only produced under pathological conditions and has no known physiological function. Depending on environmental co-factors and target organs, in addition to MS, HERVs have been implicated in T1D, chronic inflammatory demyelinating polyneuropathy, amyotrophic lateral sclerosis (ALS) and schizophrenia.

LM: Could you tell us more about your lead molecule, GNbAC1?

HP: The elucidation of its relevant pathogenic properties made it conceivable that HERV-W envelope protein was a target for a novel therapeutic avenue in MS. The pathogenic cascades involved in the disease also suggested a possibility to block a key “causative” factor without interfering with physiological functions as most existing treatments usually do.

GNbAC1 is a humanized mAb that specifically binds at the surface subunit of the pHERV-W Env protein that directly activates toll-like receptor 4 (TLR4) to neutralize the protein.

GeNeuro recently released 12-month data from an international, multicenter, placebo-controlled study of GNbAC1 in 260 RRMS patients, named “CHANGE-MS”. Treatment with GNbAC1 resulted in a remarkably consistent effect at the highest dose (18 mg/kg) on three independent set of markers of neuroprotection, which are known to be linked to disease progression:

In particular, there was a significant benefit in reducing thalamic atrophy for the 18mg/kg group versus the control group (over 70%). Thalamic atrophy is increasingly regarded by the MS community as an important measure, as thalamic volume has been associated with disability progression. A benefit in reducing cerebral cortical atrophy at one year, with a dose-effect also reaching significance (a reduction of 30%).

T1 black holes represent areas of tissue destruction in the brain. GNbAC1 treatment reduced the number of T1 black holes of at least 14 cubic millimeters by over 60%, reaching statistical significance. This effect was confirmed by a reduction in total T1 black hole volume, showing a clear neuroprotective benefit.

The benefit in magnetization transfer ratio (MTR) signal of 18mg/kg relative to the placebo at 6 months remained stable versus the control group at 12 months, in both normal appearing white matter and cerebral cortical bands, consistent with a potential benefit on remyelination.

This is the first time that the benefit of a treatment targeting endogenous retrovirus protein is shown in a clinical trial. GeNeuro and partner Servier are now discussing how best to move GNbAC1 into Phase 3 studies.

Following confirmation that pHERV-W Env is involved in T1D pathogenesis, GeNeuro has completed a Phase 2a clinical study of GNbAC1, with initial 6-months results expected in September 2018. The Phase 2a randomized, placebo-controlled study is evaluating GNbAC1 in 60 recently diagnosed adult patients in over 10 centers in Australia. The primary endpoint is the safety of GNbAC1 in this new population of patients. Secondary endpoints will measure the link between treatment response and pHERV-W Env biomarkers, insulin production based on C peptide levels, and other biomarkers associated with T1D, such as insulin consumption, glycemia and production of diabetic auto-antibodies.

Other indications targeted by GeNeuro with GNbAC1 include CIDP (chronic inflammatory demyelinating polyneuropathy), an orphan neurological disease where a Phase 2a proof-of-concept study is planned for 2019.

LM: What other drug candidates are currently in development?

HP: GeNeuro is developing other drug candidates, currently at preclinical stage, against inflammatory psychosis, as well as against ALS in a research partnership with the National Institutes of Health (NIH). 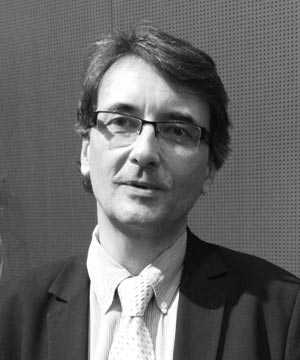