Complete the form below to unlock access to this Audio Article: "A Better Way to Personalize Bladder Cancer Treatments"

In early proof-of-concept research, the team took bladder tumors from individual patients, identified actionable mutations and grafted the tumors into mice. From there, the researchers simultaneously tested multiple therapies in the tumor models. Treatments that were effective in the models could then be given to patients.

“By prescreening, we can determine which medication works, providing a much higher chance the patient will benefit,” said first author Chong-Xian Pan, a genitourinary oncologist. “This can reduce toxicity, increase efficiency and lower costs.”

In theory, finding a tumor’s mutations should outline a clear treatment plan, as targeted drugs are matched with genetic anomalies. However, although genomic tools can find mutations, they don’t always identify which ones drive a patient’s cancer. 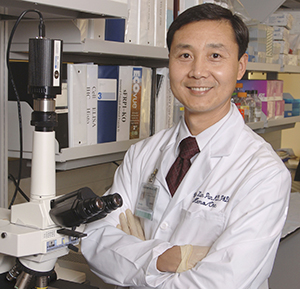 “Look at how many mutations a cancer can have — from only a few in pediatric cancers to dozens or hundreds in adult cancers,” said Pan. “Lung cancer probably has hundreds of mutations and only a few of those are important. But at this point we can’t always figure out which mutations are important and which are unimportant.”

Without knowing which mutations are crucial to cancer growth, oncologists must opt for one therapy over another. If the choice is wrong, time and toxicity can make it difficult to backtrack and try a different treatment.

“The patient gets a biopsy and we send the tissue off for genomic analysis, which will show us abnormalities that can be treated,” said Ralph de Vere White, distinguished professor of urology and director of the UC Davis Comprehensive Cancer Center. “Let’s say there are four of them. Now we have to guess which one is driving the cancer, and the success rate is about 12 percent. That’s putting the patient through a lot for just 12 percent.”

Though Pan’s study was small, the grafts showed remarkable genetic fidelity to the original patient tumors — between 92 and 97 percent — even after several months. This outcome proved vastly more effective than growing cell lines in a dish, which deviate from the mother tumor in just a few days.

The new model also provided information that would be impossible to obtain in patients, the researchers said. Because tumors develop more rapidly in mice, they could quickly determine which therapies were effective. They could also conduct multiple biopsies to follow tumor evolution, identify escape mutations and test therapeutic countermoves. Most importantly, the grafts provided insights into which drugs could help patients.

“In one case, the drug cisplatin didn’t work and gemcitabine barely worked, but the combination really knocked the tumor out in the mouse,” said Pan. “And that’s exactly what happened in the patient.”

The researchers said that while grafting patient tumors for further study holds a great deal of promise, the ultimate goal is to use computers to help select effective treatments.

“We’re not saying the mouse model is the answer,” said de Vere White, “but we have a high failure rate with the standard of care, and we’re trying to figure out if the mouse can helps us do better. In time, we’d like to be able to biopsy the patient, sequence the tumor, feed that information into the computer and have the computer tell us which therapy will work.”