A Novel Drug to FIght Malaria

A Novel Drug to FIght Malaria

They have shown that this compound is the first to cripple a critical protein that the malaria parasite needs to survive at different stages of its complex life cycle, and is suitable for clinical tests in humans. 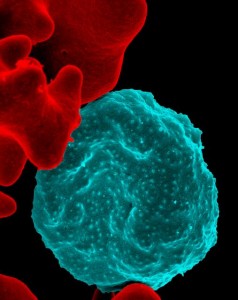 If human trials underway are successful, the compound — known by its acronym DSM265 — could give doctors a new tool to prevent and treat infection by the microscopic parasites that cause malaria, a mosquito-borne disease that kills more than 500,000 people annually.

The team’s efforts stem from new, streamlined processes to identify and optimize chemical compounds that show promise against malaria parasites. The scientists in this international partnership — spanning 20 institutions on three continents — pooled their collective expertise to accelerate the pace of discovery and validation. This novel anti-malarial drug is their first major breakthrough for use in humans.

“This is the first of a new class of molecules that’s going into humans,” said UW chemistry professor Pradipsinh Rathod, one of the founders and leaders of this endeavor. “Until now, everything else in humans has been variations of drugs that have been developed in the distant past.”

DSM265 targets a cellular protein made by the malaria parasite. Malaria parasites rely on this protein — known by its acronym DHODH — to express their genes and copy those genes when it’s time to divide. Since DHODH provides a critical function, this drug could impair the parasite at multiple stages of its life cycle, including one elusive stage when it hides in the human host’s liver.

Rathod’s partners include Margaret Phillips with the University of Texas Southwestern Medical Center at Dallas and Susan Charman at Monash University in Melbourne. The three research groups and their recent partners in Europe, Australia and the U.S. shared information and divided tasks openly, playing to the strengths of each group. Rathod’s lab at the UW was involved from the start.

“All the enabling chemistry work was done here first, and all the tests on malaria parasite cells and human cells started and have continued here,” said Rathod.

Since DHODH performs such a critical role in malaria cells, scientists had long sought drugs that would inactivate it. The Texas researchers studied the malaria DHODH protein, working to identify a chemical compound that would cripple it. Once they found a chemical that showed promise, Rathod’s lab undertook validation, modification, and fine-tuning. With additional guidance and collaboration from advisors at the Medicines for Malaria Venture, Rathod’s group altered the chemical compound to increase its potency against DHODH.

They also had to ensure that the compound would not target the human version of the DHODH protein, which performs an important role in our cells. In all, Rathod’s group made more than 500 versions of the initial compound and tested how well it inhibited malaria parasites in the lab. The 265th version — DSM265 — showed the most promise.

“‘DSM’ actually stands for ‘Dallas-Seattle-Melbourne,’ our three cities,” said Rathod. “We wanted to name it after our founding teams that are working really hard at each site.”

Rathod and his group passed DSM265 and related compounds to their collaborators at Monash University, who tested how our human cells might modify or metabolize the compound. These experiments ensured that a drug based on DSM265 would last for a long time in our bodies — an ideal feature for a single-dose anti-malarial treatment — and would not produce toxic byproducts. They also determined what doses of the compound might be the most effective in humans.

Rathod’s lab also developed and performed experiments to test how well the malaria parasite might evolve to become resistant against DSM265.

“We developed methods to watch the malaria parasites mutate and try to generate solutions against DSM265 in real time,” said Rathod. “And with whole genome sequencing, we can really look at the whole scene as it’s unfolding in front of us.”

If doctors know the conditions that permit the malaria parasite to develop resistance to DSM265, they can tailor the drug’s use in a clinical setting to lower that risk.

Rathod hopes that the development and discovery pipeline for DSM265 will pave the way for a faster and more collaborative drug development process in what he calls “the long war against malaria.” The project benefited from an open process, Rathod said. Researchers also transferred their patent rights for DSM265 to the Medicines for Malaria Venture, a Bill & Melinda Gates Foundation-supported nonprofit public-private partnership that is leading some of the clinical and field trials, in the hopes of accelerating the drug’s clinical development.