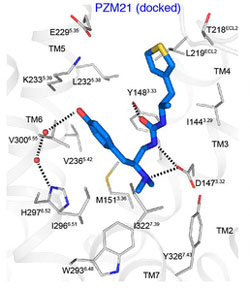 Scientists have synthesized a molecule with a unique profile of highly specific pain-relieving properties and demonstrated its efficacy in mice. Compared to existing opioid pain relievers, like morphine, the new agent, called PZM21, was not “reinforcing” or prone to triggering potentially lethal respiratory impairment – and was also less constipating. Also unlike existing analgesics, it had little effect on spinal cord reflexive responses, instead targeting the brain-mediated emotional/experiential component of pain. In addition to clinical potential, PZM21 also holds promise as a “tool molecule” for exploring the workings of brain pain systems, say the researchers.

The study represents the combined efforts of NIH-funded research teams led by Nobel laureate Brian Kobilka, M.D. , of Stanford University, NIMH-funded Bryan Roth, M.D., Ph.D.  (inventor of the chemogenetic technology DREADD), of the University of North Carolina, and Brian Shoichet, Ph.D.,  of the University of California San Francisco. They report on their findings August 17, 2016 in the journal Nature.

“This work demonstrates the power of structure-based design to speed up the development of drugs with optimal signaling and therapeutic properties,” explained Laurie Nadler, Ph.D., chief of the NIMH Neuropharmacology Program, which co-funded the research along with NIH’s National Institute of General Medical Sciences and National Institute on Drug Abuse.

The researchers achieved PZM21’s specificity by applying knowledge of opioid receptor structure to design an agent optimized for just the desired properties. Evidence suggested that the undesirable side effects of morphine-like opiates work on the receptor through a molecular signaling pathway linked to beta-arrestin, while the desired analgesic effects work through a G protein-coupled receptor pathway. The researchers screened and ranked more than 3 million compounds for these properties – evaluating each in about 1.3 million configurations for their ability to tweak the opioid receptor in the desired ways. After exhaustive winnowing, they used the knowledge gained to synthesize the strongest G protein and weakest beta-arrestin activator. PZM21’s unprecedented chemical structure then performed just as they had theorized in mouse tests of analgesic and side effect potential.