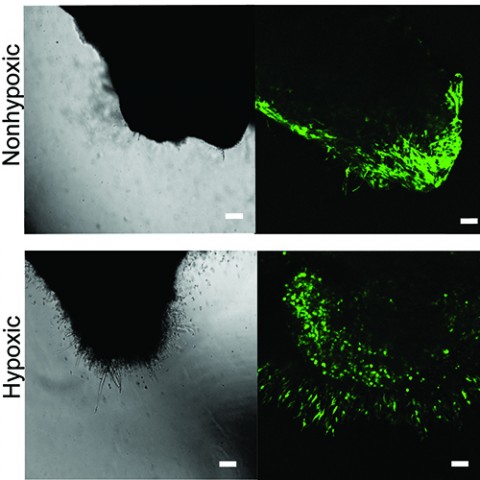 Like most life forms, cancer cells need oxygen to survive. But scientists had never tracked cancer cells' search for oxygen in their early growth stages until now—a step toward deeper understanding of one way cancer spreads that could help treat the disease.

In a paper published in the Proceedings of the National Academy of Sciences, bioengineers from Johns Hopkins University and the University of Pennsylvania report results showing how sarcoma cells in mice pursue a path toward greater concentrations of oxygen, almost as if they were following a widening trail of breadcrumbs. That path is suggested to lead the cells to blood vessels, through which the cells can spread to other parts of the body.

"If you think about therapeutic targets, you could target this process specifically," said the study's lead author, Sharon Gerecht, a professor in JHU's Department of Chemical and Biomolecular Engineering and associate director of the Institute for NanoBioTechnology.

Gerecht acknowledged that clinical application is a long way off. But she said these results, reached after three years of study in her laboratory, provide clues about a key part of the life cycle of soft-tissue sarcomas and also a proven way to test cancer treatments in the lab.

Sarcoma is a cancer that affects connective tissue, including bones, muscles, tendons, cartilage, nerves, fat, and some blood vessels. The study focused specifically on soft tissue sarcoma that does not affect bones, which is diagnosed in some 13,000 patients a year in the United States. Roughly 25-50% of those patients develop recurring and spreading, or metastasizing, cancer.

Gerecht and her seven co-authors—four affiliated with Hopkins, three with the University of Pennsylvania—tracked thousands of early-stage cancer cells taken from mice as they moved through a mockup of bodily tissue made of clear hydrogel in a petri dish. Hydrogel—a water-based material with the consistency of gelatin—replicates the environment surrounding cancer cells in human tissue.

For this experiment, the hydrogels contained increasing concentrations of oxygen from the bottom of the hydrogel to the upper layer. That allowed researchers to track how cancer cells respond to different levels of oxygen, both within a tumor and within body tissues.

Analysis of sarcoma tumors in mice, for instance, shows that the largest tumors have a large area of very low oxygen at the center. Smaller tumors have varying oxygen concentrations throughout.

The researchers' first step was to show that cancer cells migrate more in low-oxygen or "hypoxic" hydrogels as compared with hydrogels containing as much oxygen as the surrounding atmosphere. They then looked at the direction of the cell movement.

In the hydrogel, cells were found to move from areas of lower oxygen to higher. Researchers also found that the medication minoxidil—widely used to treat hair loss and known by its trade name Rogaine—stopped the movement of cancer cells through the hydrogel.

Cancer cells are known to modify their environment to make it easier for them to move though it, but this study takes that understanding a step further, Gerecht said.

"We did not know it was the oxygen" that effectively directs the movement, she said. "It's suggesting oxygen gradient affects early stages of the metastasis process."

The study also demonstrates the three-dimensional hydrogel model as an effective tool for testing cancer treatments in a laboratory, the authors wrote. Gerecht said a human patient's cancer cells could be placed into the hydrogel just as the mouse cells were, allowing clinicians to see how they respond before treatments are given to patients.