Chemists Unlock the Potential of Fluoroalkenes

Chemists Unlock the Potential of Fluoroalkenes

One of the strongest chemical bonds in organic chemistry is formed between carbon and fluorine, giving unique properties to chemical compounds featuring this group. Pharmaceutical researchers are very interested in carbon-fluorine bond containing molecules because of the way they mimic certain behaviors of biological compounds. However, the strength of the carbon-fluorine bond makes it difficult to remove and replace fluorine atoms in a molecule, greatly limiting the structures and types of chemicals that can be made.

Now, a team of Japanese scientists from Osaka University, in collaboration with the RIKEN Center for Life Science Technologies and Tokyo Medical and Dental University, has developed a new way of extending the chemistry of fluoroalkene molecules, granting access to a new range of fluoroalkenes for pharmaceuticals and other applications. They recently reported their findings in the Journal of the American Chemical Society.

“It’s easy to add fluorine groups to alkenes, but not so easy to change them later,” first author Hironobu Sakaguchi says. “We previously showed that tetrafluoroethylene (TFE), one of the most important materials for the production of fluorine-containing polymers such as Teflon™ in the fluorine industry, could be transformed into trifluorovinyl compounds using transition-metal complexes, although the scope of those reactions was quite limited. Furthermore, it was hard for those reactions to be applicable to other fluoroalkenes than TFE. Now, we can use copper-catalyzed conditions which are applicable to versatile fluoroalkenes to replace fluorine atoms with boron, which opens up a huge range of potential target molecules and should boost the use of fluoroalkenes in pharmacological studies.” 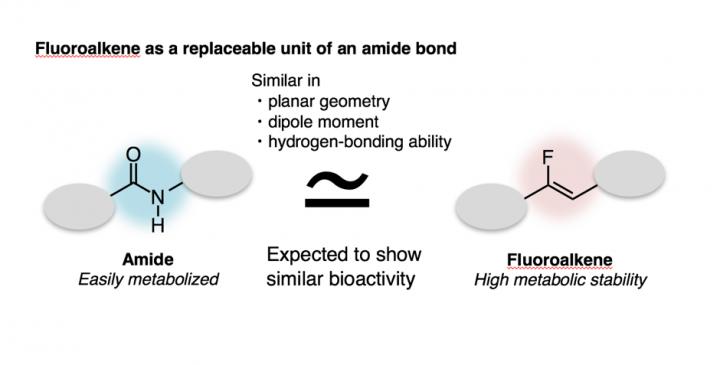 Alkenes are groups featuring a carbon double bond with four other groups or atoms attached. The researchers found a way to replace a single fluorine atom with an easily transformable boron-containing group in fluoroalkenes featuring multiple fluorine atoms. Using their new method, the researchers demonstrated the synthesis of a fluoroalkene compound designed to mimic the biologically active molecule atorvastatin. 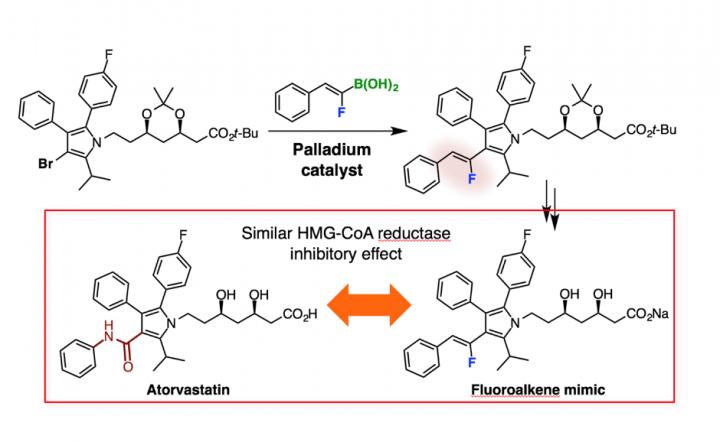 By using our method, a fluoroalkene mimic of a widely used antihyperlipidemic drug, atorvastatin, was synthesized in three steps from easily available bromopyrrole. Evaluation of the HMG-CoA reductase inhibitory effect of the mimic compound demonstrated that the replacement of the amide moiety to the fluoroalkene structure did not significantly affect the activity of the original compound. Credit: ©2017 Osaka University, RIKEN, and Tokyo Medical and Dental University

“Chemists realize that organofluorine compounds offer many unique functionalities and properties that cannot be achieved without fluorine,” coauthor Masato Ohashi says. “Our demonstration of a new robust way of making fluoroalkenes into more attractive building blocks should be very useful to chemists working with these compounds in the fields of pharmacology and materials science.”

This article has been republished from materials provided by Osaka University. Note: material may have been edited for length and content. For further information, please contact the cited source.