The hybrid optical microscope/mass spectrometry-based imaging system developed at the Department of Energy’s Oak Ridge National Laboratory operates under ambient conditions and requires no pretreatment of samples to analyze chemical compounds with sub-micron resolution. One micron is equal to about 1/100th the width of a human hair. Results of the work have recently been published by postdoctoral associate Jack Cahill and Gary Van Berkel and Vilmos Kertesz of ORNL’s Chemical Sciences Division.

“Knowing the chemical basis of material interactions that take place at interfaces is vital for designing and advancing new functional materials that are important for DOE missions such as organic photovoltaics for solar energy,” Van Berkel said. “In addition, the new tool can be used to better understand the chemical basis of important biological processes such as drug transport, disease progression and response for treatment.” 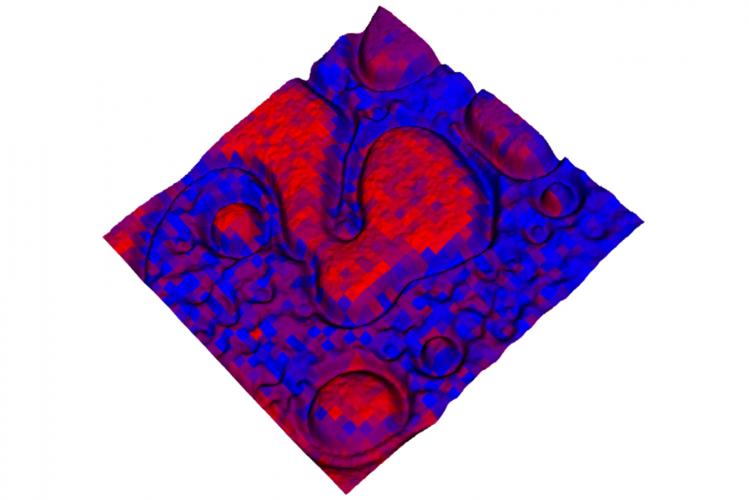 The hybrid instrument transfers tiny amounts of a material such as human tissue or an organic polymer from a sample by a laser ablation process in which material is captured and transported via liquid stream to the ionization source of the mass spectrometer. In just seconds, a computer screen displays the results.

Researchers noted that the resolution of less than one micron is essential to accurately differentiate and distinguish between polymers and sub-components of similar-sized cells.

“Today’s mass spectrometry imaging techniques are not yet up to the task of reliably acquiring molecular information on a wide range of compound types,” Cahill said. “Examples include synthetic polymers used in various functional materials like light harvesting and emitting devices or biopolymers like cellulose in plants or proteins in animal tissue.”

This technology, however, provides the long-sought detailed chemical analysis through a simple interface between a hybrid optical microscope and an electrospray ionization system for mass spectrometry.