Deadly Jellyfish "Milked" to Save Lives

Deadly Jellyfish "Milked" to Save Lives

Associate Professor Fry said box jellyfish venom extraction was much more challenging than in snakes and spiders, and research into this type of venom was lagging.

“Jellyfish and other cnidarians are the oldest living venomous creatures, but research has been hampered by a lack of readily obtainable venom harvested in a reproducible manner,” he said.

“More papers are published on snake venom in a single year than have ever been published on jellyfish venom. The reason is a lack of venom supply.

“Without this raw material, life-saving anti venom cannot be developed, and we can’t study how venom components can be developed into new drugs. 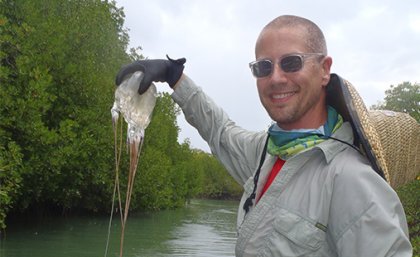 “Our method is a practical one that can be used in the field with high efficiency, so it removes a major bottleneck from jellyfish venom research.

“Obtaining venom from these jellyfish has been challenging, and many methods have been used, with some taking more than two weeks while others yield only very tiny amounts of pure venom.

“These previous methods also resulted in the venom being heavily contaminated with material such as mucus.”

A sting from a box jellyfish can kill a human in minutes and the pain alone can cause the body to go into deadly shock.

The new method uses ethanol to cause tentacle venom cells – nematocysts – to fire. Immediate firing of the nematocysts allows the researchers to collect venom from the box jellyfish.

Professor Fry said the success of ethanol was ironic, as the substance would actually exacerbate the result of a sting if used as first-aid treatment.

“It is very much a case of doing something that would be the wrong thing from a first-aid perspective, which ironically turns out to be an extremely simple field technique to obtain high-quality venom,” he said.

“All aspects of this research come with unique difficulties, such as a handling a delicate animal which is impossible to keep or breed in captivity and is found only in cyclone-prone areas of northern Australia and the Indo-Pacific region, often in crocodile habitat.”

“We anticipate that this process will be equally useful for collecting venom from all other jellyfish.”