Complete the form below to unlock access to this Audio Article: "Elusive Liver Stem Cell Identified in Mice by Researchers"

Researchers at the Stanford University School of Medicine have identified a cell type in the liver of mice that can both self-renew and make new liver cells. The discovery solves a long-standing mystery as to how the organ, which is responsible for many metabolic processes, maintains itself when liver cells, most of which are called hepatocytes, grow old and die.

“There’s always been a question as to how the liver replaces dying hepatocytes,” said professor of developmental biology Roel Nusse, PhD. “Most other tissues have a dedicated population of cells that can divide to make a copy of themselves, which we call self-renewal, and can also give rise to the more-specialized cells that make up that tissue. But there never was any evidence for a stem cell in the liver.” 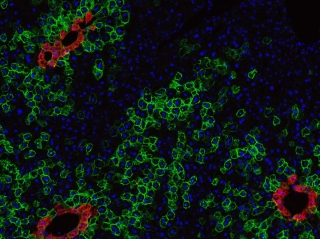 Researchers have assumed instead that mature hepatocytes would themselves divide to replace a dying neighbor. However, these cells have an abnormal amount of DNA, which would make cell division extremely difficult.

Nusse is the senior author of the work. He is also a member of the Stanford Cancer Institute, the Stanford Institute for Stem Cell Biology and Regenerative Medicine and a Howard Hughes Medical Institute investigator. First author Bruce Wang, MD, an assistant professor of gastroenterology and hepatology at the University of California-San Francisco, led the research as a visiting scholar in Nusse’s lab.

The liver is a large, multi-lobed organ that plays a vital role in filtering toxins from the blood. It also makes digestive enzymes and is involved in many important metabolic processes. A central vein carries blood through the organ; the stem cells identified by Wang and Nusse are found adjacent to this vein.

Until now, it’s been thought that there was just one class of hepatocytes in the liver. Most of these mature cells are polyploid, meaning they have more than the normal two copies of each chromosome. Although this abundance of chromosomes makes it difficult, if not impossible, for the cells to divide normally, it may confer other benefits.

“If it’s not necessary for a cell to maintain the capacity to divide, it can do whatever it wants with its genome,” said Nusse. “Red blood cells, for instance, have no DNA. Muscle cells have many copies of each chromosome.” An advantage of making extra copies of chromosomes could be the enhanced ability to quickly make large amounts of particular proteins, for example.

In contrast, the cell population identified by Wang and Nusse in the mice is diploid, with a normal complement of DNA. They can divide to make others like themselves, or to make cells that start as diploid but then acquire additional copies of their genome as they move outward from the central vein into the main body of the liver.

“People in the field have always thought of hepatocytes as a single cell type,” said Wang. “And yet the cell we identified is clearly different from others in the liver. Maybe we should accept that there may be several subtypes of hepatocytes, potentially with different functions.”

Wang and Nusse identified the liver stem cells around the central vein by looking in mice for cells anywhere in the organ that expressed a protein called Axin2. The protein is produced by cells in response to the presence of members of the Wnt signaling protein family. Years of research in the Nusse laboratory have shown that the Wnt proteins play a critical role in embryonic development, and also in the growth and maintenance of stem cells throughout the body.

Wang and Nusse further found that, in the liver, the endothelial cells that line the interior surface of the central vein make Wnt2 and Wnt9b. These Wnt proteins, in turn, confer stem cell properties on the neighboring hepatocytes.

Finally, the researchers learned that a portion of the descendants of the Axin2-expressing cells move outward from the central vein over time. These cells become polyploid and begin to express other, hepatocyte-specific genes. After one year, these descendants had replaced about 30 percent of the entire mouse liver, and made up about 40 percent of all hepatocytes in the organ.

The newly identified liver stem cell also expresses genes associated with very early embryonic development, which may give a clue as to when and where they arise.

“Perhaps these stem cells in the adult liver actually arise very early in development,” said Nusse, “when the embryo sets aside a certain population of cells to maintain the organ during adult life.”

Although the current research was conducted in mice, the possibility that there is more than one kind of hepatocyte in humans could transform the study of liver biology, the researchers said. For example, hepatocytes have proven notoriously difficult to grow in laboratory culture for study or for use in drug testing.

“The most common reason that promising new drugs for any type of condition fail is that they are found to be toxic to liver,” said Wang. “Researchers have been trying for decades to find a way to maintain hepatocytes in the laboratory on which to test the effects of potential medications before trying them in humans. Perhaps we haven’t been culturing the right subtype. These stem cells might be more likely to fare well in culture.”

“Does liver cancer arise from a specific subtype of cells?” said Wang. “This model also gives us a way to understand how chromosome number is controlled. Does the presence of the Wnt proteins keep the stem cells in a diploid state? These are fundamental biological questions we can now begin to address.”