Enzyme Malfunction May be Why Binge Drinking Can Lead to Alcoholism

A malfunctioning enzyme may be a reason that binge drinking increases the odds of alcoholism, according to a study by scientists at the Stanford University School of Medicine.

The scientists identified a previously unsuspected job performed by the enzyme, ALDH1a1, in mice. The discovery could help guide the development of medications that extinguish the urge to consume alcohol, said Jun Ding, PhD, assistant professor of neurosurgery. 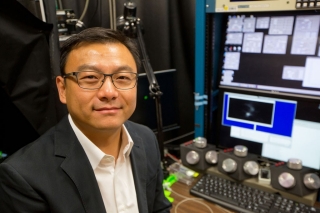 Alcoholism is an immense national and international health problem. More than 200 million people globally, including 18 million Americans, suffer from it. Binge drinking substantially increases the likelihood of developing alcoholism. As many as one in four American adults report having engaged in binge drinking in the past month.

Existing medications for treating alcoholism have had mixed results. Disulfiram (Antabuse) and similar substances, for example, work by inducing unpleasant side effects — including shortness of breath, nausea, vomiting and throbbing headaches — if the person taking it consumes alcohol. “But these drugs don’t reduce the craving — you still feel a strong urge to drink,” Ding said.

In the new study, Ding and his associates showed that blocking ALDH1a1 activity caused mice’s consumption of and preference for alcohol to rise to levels equivalent to those observed in mice that had experienced several rounds of the equivalent of binge drinking. Restoring ALDH1a1 levels reversed this effect.

Previous studies have shown that mutations in the gene for ALDH1a1 are associated with alcoholism, but the reasons for this have been obscure. A key finding in the new study is that in certain nerve cells strongly implicated in addictive behaviors, ALDH1a1 is an essential piece of a previously unknown biochemical assembly line for the manufacture of an important neurotransmitter called GABA. Neurotransmitters are chemicals that bind to receptors on nerve cells, promoting or inhibiting signaling activity in those cells.

GABA is the brain’s main inhibitory neurotransmitter. It was previously thought that GABA was made in mammalian brains only via a different biochemical assembly line that doesn’t involve ALDH1a1.

While GABA is produced widely throughout the brain, the novel GABA-production assembly line identified by Ding’s group was observed only in a group of nerve cells known to play a powerful role in addiction. The new finding has potentially great clinical significance because a drug that could increase GABA synthesis through this alternative assembly line — by boosting ALDH1a1 levels in the brain — could potentially restore the balance in neural circuitry that’s been thrown out of kilter by excessive alcohol consumption without dangerously elevating GABA levels elsewhere in the brain.

Another neurotransmitter substance, dopamine, is famous among neuroscientists for its involvement in modulating motion and motivation. Dopamine supercharges the machinery of the brain’s so-called reward circuit, which is involved in all types of addictive behavior from cocaine, morphine and alcohol abuse to compulsive gambling.

The reward circuit is a network of nerve cells and connections found in the brains of living creatures from flies to humans and every animal in between. It guides individuals’ behavior — and ensures species’ survival — by offering pleasurable sensations as a reward for eating, sleeping, having sex and making friends. Key components of this circuit are fueled by dopamine.

Until recently, neuroscientists widely assumed that each type of nerve cell in the brain can release one and only one neurotransmitter. But in a study published in Nature in 2012, Ding, then a postdoctoral scholar at Harvard Medical School, and his colleagues demonstrated that dopamine-producing nerve cells can manufacture and release other types of neurotransmitters, too, including GABA. These cells not only produce both dopamine and GABA but release them simultaneously.

“We wondered what GABA is doing in there,” Ding said. “Why does one nerve cell need two neurotransmitters?”

Ding also had another question. “All of us normally encounter countless reward-inducing situations without getting addicted,” he said. “Every time I publish a paper, my dopamine-producing nerve cells go crazy, but I don’t get addicted. Why not?”

To find out whether GABA in dopamine-producing cells might have something to do with addiction, Ding and his associates initially tried to examine GABA’s effects by blocking its production through the conventional assembly line — that is, the only one known at the time — while stimulating only dopamine-producing cells in mice’s brains. To their surprise, these tried-and-tested methods failed to reduce GABA levels in these cells or the neurotransmitter’s effects on nearby downstream nerve cells. That was puzzling.

Curious, Ding began a literature search to see if there were any other ways that biological systems manufacture GABA. He learned that in plants, GABA can be produced via a biochemical assembly line quite separate from the common, previously known one our brains use. He found that one step in this alternative GABA-manufacturing pathway is performed by a family of enzymes, aldehyde dehydrogenases, that are better known for being involved in the breakdown of alcohol. Ding also found that aldehyde dehydrogenases are expressed not only in the liver, where most of the alcohol we drink gets metabolized, but in some parts of the brain that, to Ding — whose professional career has focused on the brain’s dopamine-producing nerve circuitry — looked anatomically identical to the dopamine-producing nerve cells that feed the reward circuit. Ding’s team verified that the specific family member at work in those dopamine-producing cells was ALDH1a1.

Using advanced laboratory methods to impair ALDH1a1 activity in mice, the scientists saw GABA levels in dopamine-producing nerve cells drop, just as they did when mice with normal ALDH1a1 activity underwent repeated bouts of high alcohol intake — the equivalent of binge drinking. In behavioral tests, the ALDH1a1-deficient mice showed the same increased alcohol preference and intake as did otherwise normal “binge-drinker” mice. These effects were reversed by manipulations that raised ALDH1a1 levels in the mice.

Ding said he thinks that GABA’s co-release with dopamine, and GABA’s inhibitory character, may be what prevents everyday pleasurable sensations from causing most of us, most of the time, to become addicted to the behaviors that produce them. Mutations in ALDH1a1, he said, may predispose some people to alcoholism by disabling this brake on our reward machinery. His lab is now exploring whether the same molecular mechanisms may be at work in other forms of addiction.

Combatting Tuberculosis, the “Captain of All These Men of Death”