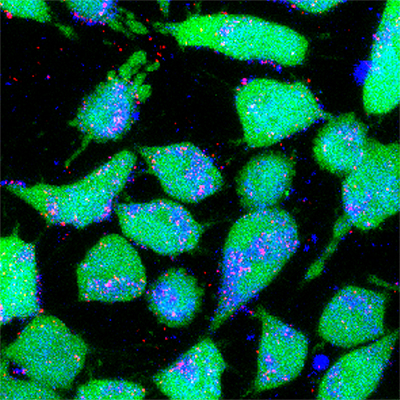 Sticky nanoparticles that deliver drugs precisely to their targets — and then stay there — could play a crucial role in fighting ovarian and uterine cancers.

A team of researchers at Yale found that a treatment using bioadhesive nanoparticles loaded with a potent chemotherapy drug proved more effective and less toxic than conventional treatments for gynecological cancer. The results of the work, led by professor Mark Saltzman at the Yale School of Engineering and Applied Science and professor Alessandro Santin at the Yale School of Medicine, appear Sept. 19 in the Proceedings of the National Academy of Sciences.

The nanoparticles are loaded with a drug known as epothilone B (EB) and injected into the peritoneal space, the fluid of the abdominal cavity. EB has been used in clinical trials to target tumor cells resistant to conventional chemotherapy agents. The drug proved effective in these trials, but severe side effects caused by the drug’s high toxicity prevented further use.

The Yale Cancer Center researchers’ treatment significantly reduces the drug’s toxicity by encasing it in a nanoparticle that gradually releases the drug in high concentration at the cancer site. The problem with conventional nanoparticles, though, is that they are cleared from the target region too quickly to have much of an effect due to their small size, note the scientists.

“The challenge was to find a way to use that drug, which is very effective if you can keep it in the right place for a long enough period,” said Saltzman, the Goizueta Foundation Professor of Biomedical and Chemical Engineering.

By localizing the delivery of the drug, Santin said, they both decreased the toxicity of the drug and increased its effectiveness. This treatment could be particularly beneficial to patients with later stages of ovarian and uterine cancer, which is extremely difficult to treat due to how the cancer spreads in the peritoneal region, he said.

“They’ve been treated with surgery and chemotherapy and are now resistant to any standard treatment, and we’ve shown that this agent can be effective,” said Santin, professor of obstetrics, gynecology, and reproductive sciences, and research team leader of the Gynecologic Oncology Program at Smilow Cancer Hospital at Yale New Haven.

For future studies, Saltzman said, they may “tune” the nanoparticles’ properties. For instance, they can adjust the adhesiveness of the particles, and how quickly the particles release the drugs at the target site.