Complete the form below and we will email you a PDF version of "Food Additives Promote Inflammation, Colon Cancer " 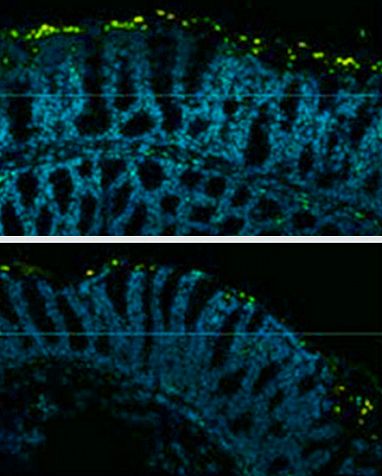 Our digestive tracts are home to trillions of microbes, including bacteria, fungi, and viruses. This microbial community, collectively known as the gut microbiota, plays a role in illness and health. Changes in these microbes have been associated with several diseases including obesity, type 2 diabetes, and irritable bowel syndrome.

Dietary emulsifiers, which are chemically similar to detergents, are added to many processed foods to improve texture and extend shelf life. Scientists at Georgia State University previously found that mice fed low levels of common dietary emulsifiers developed altered gut microbiota and a thinned mucus barrier protecting the lining of their intestines. The mice also developed low-grade intestinal inflammation and metabolic syndrome—a group of conditions that increase the risk for type 2 diabetes, heart disease, and stroke.

Intestinal inflammation is a known risk factor for colorectal cancer. In their latest study, the scientists investigated whether dietary emulsifiers might affect the risk for colorectal cancer by altering the gut microbiota. The research was funded in part by NIH’s National Institute of Diabetes and Digestive and Kidney Diseases (NIDDK). Results were published online on November 7, 2016, in Cancer Research.

The team fed mice standard chow and either plain drinking water or water with 1% of the commonly used dietary emulsifiers carboxymethylcellulose or polysorbate-80. This dose was designed to model the diets of people who eat large amounts of processed foods.

These results hint that changes in the gut microbiota caused by dietary emulsifiers may play a role in promoting tumor development. “The incidence of colorectal cancer has been markedly increasing since the mid-20th century,” first author Dr. Emilie Viennois notes. “A key feature of this disease is the presence of an altered intestinal microbiota that creates a favorable niche for tumorigenesis.” Whether dietary emulsifiers in the human diet have a similar effect will be a subject for future study.

Story from the National Institutes of Health. Original piece written by Carol Torgan. Please note: The content above may have been edited to ensure it is in keeping with Technology Networks’ style and length guidelines.