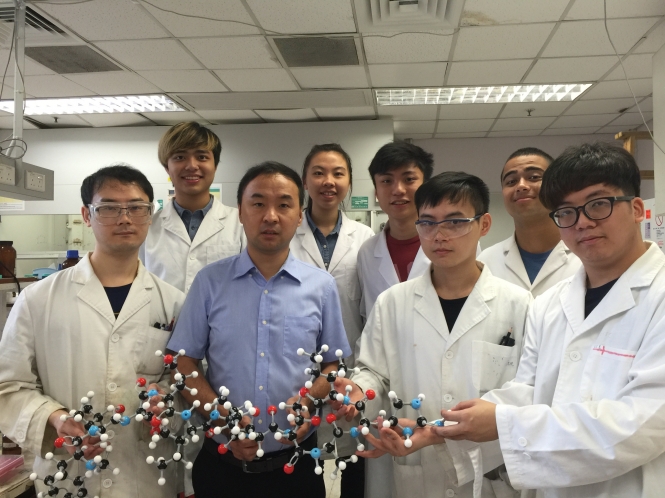 Dr  Xuechen Li (second from the left in the first row) and his teixobactin project-team at HKU Department of Chemistry, including 3 Ph.D students and 4 undergraduate students. Credit: The University of Hong Kong.

Dr Xuechen Li of HKU Department of Chemistry and his research team, together with his collaborators in University of Central Florida (Dr Yu Yuan), USA and the Hong Kong Polytechnic University (Dr Sheng Chen), have reported their studies on the synthesis of a newly discovered “game-changing” antibiotic, Teixobactin. This underlies potential application and development of the next-generation teixobactin-based antibacterial drugs.

Antimicrobial resistance is on the rise globally and has become a serious threat to human health. For instance, methicillin- resistant Staphylococcus aureus (MRSA) has emerged as one of the most important pathogens, both in hospital (HA-MRSA) and community-acquired infections (CA-MRSA). It is considered one of the most important super-bugs in Hong Kong as it is extremely infectious and has a high mortality rate. To avoid further aggravation of resistance-related problems, misuse and overuse of antibiotics should be prevented to minimize the emergence of drug-resistant organisms. At the same time, development of novel antibacterial and anti-resistant agents should be actively pursued. Although there is an urgent public need for new antibacterial drugs, very few pharmaceutical companies are interested in investing in the development of these, due to the lower profit margin compared to medicines used to treat diabetes and cardiovascular diseases. That no new antibiotics have been introduced to the market over the last decade is evidence of this. To address this issue, researchers in academia should play a more active role in the search for new antimicrobial compounds.

A team of researchers led by Dr Xuechen Li of the HKU Department of Chemistry, have taken up the responsibility and challenge and have been continuously working on the development of new antibiotics for the past seven years. In 2013, they developed the first chemical synthesis of an antibiotic daptomycin, which enabled them to search for the next-generation daptomycin-based antibiotics. Recently, his team has had further success by developing a chemical strategy to synthesize another antibiotic, Teixobactin.

Last year, the discovery of the antibiotic Teixobactin by researchers in the USA, was considered a breakthrough in antibacterial drug research (Nature, 2015, 517, 455). Teixobactin can kill a range of pathogens without detectable resistance, including methicillin-resistant Staphylococcus aureus (MRSA), vancomycin-resistant Enterococcus (VRE) and Mycobacterium tuberculosis. As promising as it is, Teixobactin is not perfect yet as a drug and can be further improved for its clinical properties via its structural modification. In the history of antibacterial drug development, modification of the lead compound has successfully led to many generations of improved penicillin-based antibiotics. Indeed, it is only through chemical synthesis and medicinal chemistry that one can flexibly modify the teixobactin structure to generate various teixobactin derivatives from simple materials. Thus, the development of a straetgy to chemically synthesize teixobactin and its derivatives has drawn a lot of attention with intense competition worldwide and more than 15 research groups from different countries have been striving to develop a chemical strategy to synthesize teixobactin. Collaborating with another chemist from University of Central Florida, USA, the HKU team became one of the fastest groups in the world to complete the chemical synthesis of teixobactin, from which they have also generated 10 teixobactin analogues with promising properties (US provisional patent filed). The strategy they developed is very efficient and can generate many teixobactin derivatives in a fast and combinatory manner. Now they are running at a full speed with an aim to synthesize more 100 different teixobactin derivatives within two years to search for analogues with improved pharmacological properties for the clinical development.

The Complete Guide to Multiplex Assays in Drug Discovery