Gene Linked to Impaired Memory in Down Syndrome – A Potential Drug Target?

Gene Linked to Impaired Memory in Down Syndrome – A Potential Drug Target?

Complete the form below and we will email you a PDF version of "Gene Linked to Impaired Memory in Down Syndrome – A Potential Drug Target?"

It may one day be possible to reverse abnormal embryonic brain development linked to Down syndrome (DS) and improve cognitive function by therapeutically targeting a key gene known as OLIG2 prenatally, suggests newly published findings.

The study published in Cell Stem Cell sought to understand the mechanisms underlying imbalances in excitatory and inhibitory neurotransmission that may be responsible for cognitive defects in DS patients.

DS is a chromosomal condition that is linked to mild or moderate intellectual disability and affects people of all ages, races and economic situations. Patients with DS often experience a gradual decline in cognitive ability as they age. The condition is most frequently caused by trisomy 21 – whereby a person has three copies of chromosome 21 instead of two copies.

The team found that inhibitory neurons were overproduced in models of DS and that the OLIG2 gene was upregulated in DS neural progenitors. By reducing OLIG2 expression, it was possible to normalize inhibitory neuron production and behavioral deficits.

Corresponding author Peng Jiang, comments on the impact of the findings and how it has influenced their current research focus: “Based on the findings in this study, we are examining if normalizing OLIG2 expression – using OLIG2 small molecule inhibitors that have drug-like properties – would be able to correct overproduction of inhibitory neurons in a brain organoid model and help improve animal behavioral performance in a human neuronal chimeric mouse model.”

Why convert skin cells to hiPSCs?

We spoke with Jiang to find out exactly why hiPSCs were used to study DS brain development: “These stem cells [hiPSCs] have the ability to differentiate into any type of cell in the brain under proper differentiation conditions. The DS hiPSCs and their neural derivatives, which have an extra copy of human chromosome 21, provide powerful tools for us to understand DS disease mechanism and identify therapeutic targets.” 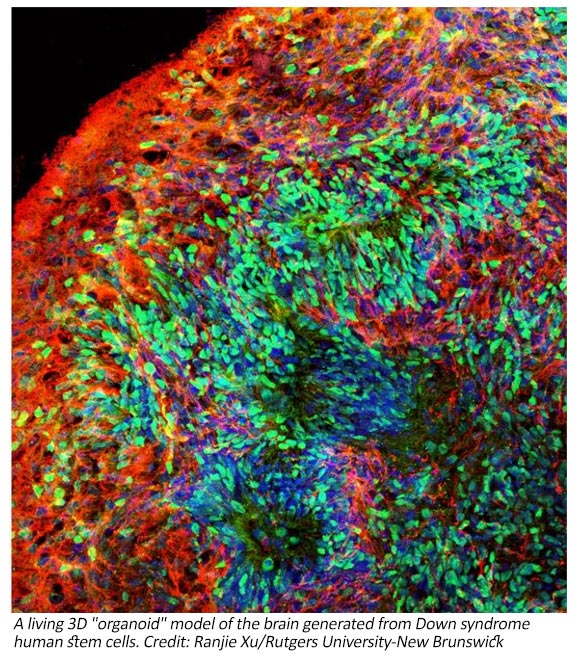 Jiang explains that by creating brain organoids they were able to “mimic” the structural organization and cytoarchitecture of the early developing human brain: “The hiPSC-derived organoids recapitulate the global gene expression profile seen in human brains at around gestation week 8 which is a critical stage during brain development. Postmortem prenatal DS human brain tissues at this stage are scarcely available for research. Thus, these organoids provide unprecedented opportunities to investigate DS human brain development at embryonic stages.”

Jiang highlights that the majority of the engrafted cells migrate away from the injection sites, dispersing widely in the cerebral cortex at six months post-transplantation, which he explains “might be reminiscent of the massive interneuron migration seen in the infant human brain.” (as described by Paredes et al., Science 2016)

The mouse model enabled Jiang and colleagues to study human interneuron development and disease pathogenesis in an in vivo environment.

Jiang also notes that the models could be used to better understand the relationship between early-onset Alzheimer’s disease and DS.

“DS, caused by triplication of human chromosome 21 (HSA21), is the single most common risk factor for early-onset Alzheimer’s disease. By the age of 40, people with DS will reliably develop amyloid plaques and neurofibrillary tangles, two pathological hallmarks of Alzheimer’s disease (AD) in the general population. By their 60s, the vast majority of DS patients will develop AD dementia,” concludes Jiang.